From farm to plate, the aroma is being missed

With time passing by, the traditions and even food habits change. Some of them wither away in oblivion as have some of heirloom varieties of rice which includes Giresal. Efforts are now being made by individuals to bring it back on the field and then on to the plate. VIKANT SAHAY ploughs in to find out what efforts are being made to restore and retrieve the lost heirloom varieties of rice in Goa. 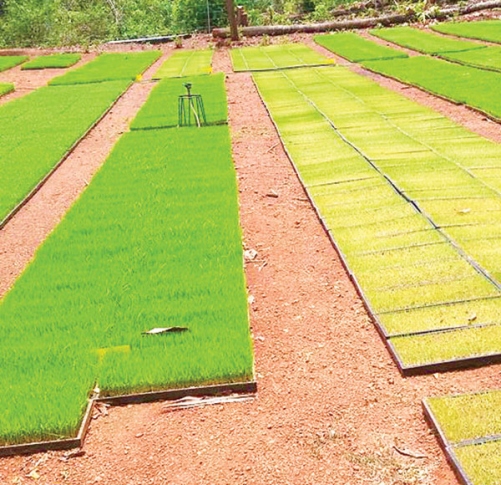 Giresal or giresao rice was a traditional aromatic variety of rice in Goa of yesteryears. It is a very short grain rice, almost like small confetti, that has a burnt brown husk, but when polished is off white. This fine grained rice has a legendary aroma that made it the choicest and most prized rice to serve in Goan home buffets, feast lunches or weddings. People used to say “when my mom was cooking rice the whole neighbourhood knew it because of the delicious aroma.” It was grown commonly in the 1960s in Goa. Now it has vanished.

However, there is an effort made to salvage this crop which has completely eradicated from Goa. Founder of Cazulo Premium Feni and Fazenda Cazulo Hansel Vaz has taken up this cause and is linking the production with marketing. He felt that since the marketing of Giresal was poor and people grew it only for their family and friends’ consumption, it slowly withered away from Goa.

In 2016, it took Hansel about three months search to find the seed. He called up everyone he knew in farmer community of Goa, perma-culturists, Patanjali seed bank, agricultural officers, etc. “Some heard of it, but everyone told me that the seed had been lost in Goa. Finally I was thrown a clue, that farmers in Azara on Amboli-Kolhapur road grow. It is only available on the roadside where farmers sell it. That if I drove along the old trade routes to Uttar Canara - Belgaum or Mahahrahstra there possibly could be some marginal farmer who would be holding some seed,” said Hansel Vaz.

After more sustained searching, he finally found two farmers. One farmer said he would share two kilogrammes seeds with him and in return Hansel would have to return him four kilogrammes at the end of the year. The other, a small marginal farmer, was willing to part, with a few kilogrammes of Giresal seeds, but would sell only a measly 10 kilogrammes. “It was not enough for my fields, but I decided to go ahead.”

Father George Quadros, popularly called the “Paddy Man of Goa”, who has been in the business of mechanised transplantation of paddy for over five years now, was a big help for Hansel who kept encouraging him. On the June 22, 2016, using the mechanical transplanter Father Quadros sowed the seedlings in Hansel’s own field.

Speaking to Herald Father George Quadros said, “What I have done is multiplied the production by using technical machines. Due to mechanisation we can multiply the paddy and hence increase the yield. The business of cultivating Giresal can only click if the marketing of this product is done in a proper manner and people are made aware that the product is back in Goa. The variety is good, tasty, aromatic and it is cooked during celebrations earlier in Goa. In fact, many years ago it was a tradition in Goa to cook Giresal rice for especial events. It gradually faded away because the production per hectare was less than the normal Jaya and Jyoti rice.”

Traditional aromatic varieties of rice are slow in growing and it takes nearly five months to grow which is one month longer than the hybrid Jaya and Jyoti. The plant stalk grows almost six feet tall, which means more cattle feed. “When the rice flowered the whole field was filled with a beautiful aroma. It attracted birds, and so the yield was about 30 per cent less than the normal commercial variety, but it tastes better,” added Hansel Vaz.

Hansel explained to Herald that he was inspired by his in-laws who have always sown paddy on their 1.5 acre field. “This is an endeavour to not only revive a lost heirloom variety of short grained aromatic rice, but also to successfully create a workable outlay model for a lay person with small land holdings to grow and sell rice. I am using the lessons I learnt with my decade-long work with the revival of feni into this project. We hope to grow over two tonnes of rice this year,” said Hansel Vaz.

He revealed that as a businessman who understands the economics of marketing, he did his calculations. “It takes 5 months from planting to harvest. This includes, labour, tilling, fertiliser, weeding, harvester, etc. Giresal sells at buys rice at Rs 100 per kg which is Rs 100,000 per tonne. So after five months of work, say your expenditure is the same Rs 5000 on labour, tilling, etc, you make Rs 95,000 which is effectively works out to Rs 19,000 per month which is a descent earning. Every tourist should be buying Feni from Goa, rice from Goa and cashew nuts from Goa. It is the worst kept secret that what we call Goa cashew nuts are anything but Goan, but imported from everywhere in the world and sold to tourists,” added Hansel Vaz. 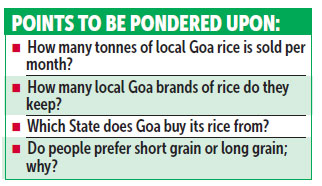 Director of Agriculture Nevil Alphonso told Herald that, “We do not promote these heirloom varieties of rice because their yield is very low and takes longer duration to mature. Farmers want quick money and very rightly so. The height of the plant is higher than the normal ones and they fall during heavy rains and endangering farmers from even harvesting. Heirloom varieties are getting extinct now as people are going for commercial cultivation. Very few people may have been cultivating these varieties and those are the ones who can market their product. Ordinary farmers cannot do that.”

When asked whether Department of Agriculture has a gene bank and do they preserve seeds, Nevil Alphonso said, “Preserving the varieties and having a gene bank is done by ICAR. In Bicholim there is one NGO that also preserves it and they do plant different types of rice there.”

Vince Costa a documentary filmmaker who has also done a popular documentary on “Agrarian culture of Curtorim”, which also included details on rice cultivation said, “I am not an expert but since I did a documentary I came to know that old and indigenous varieties of Goa were stopped being cultivated after the green revolution in mid 1960s and the induction of Jaya and Jyoti sidelined these heirloom varieties of rice.”

When asked whether those heirloom and indigenous varieties of rice can stage a comeback in Goa, Vince Costa was candid by saying, “It is impossible. It can only be romantic view. People can bring it back and grow it in pockets but as far as a large scale production is concerned, it is not possible. The soil now has no much chemical in it that the quality of such rice will surely be affected. Such varieties require different environment than what it is today. The cultivators of heirloom variety of rice will have to nurse the areas where they will be cultivating it.”