Goa Football Development Council (GFDC) has in the past been in the news on the field as well as off the field. Officials of the Council have been under a scanner following a resolution by the Council for a Vigilance Department inquiry and investigation in the purchases, remittances of funds of the council. The request for an inquiry came after Brahmanand Shankwalkar took charge of the Council. What has gone wrong with the Council? TEAM HERALD winds back the clock to uncover some incidents that have raised serious eyebrows over the functioning of the Council 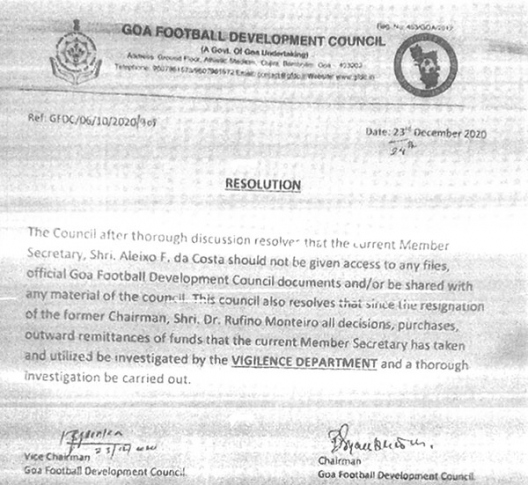 In the midst of the COVID pandemic, when all grounds were closed and no sports were taking place, Goa Football Development Council (GFDC) procured equipment worth over a crore of rupees that has remained unutilised, and as per sources in the council, the equipment is of sub-standard quality. Granted that the tender was awarded in February last year, before the lockdowns, but there was still time to keep the delivery on hold, which was not done.

That is not the whole story. There is more.

Government tender criteria had always raised eyebrows. As late as this year, retired government officials claimed that tenders floated for the renovation of Santa Cruz ground had been framed and designed to favour certain companies. What occurred at GFDC has similarities.

In 2019 in a tender worth Rs 1.2 Cr, GFDC had asked the bidders to furnish copies of single work orders of at least Rs 2 Cr from government or private institutions in the last three years. Also sought for was an annual turnover (total of last three years) to be equal or more than Rs 4 Cr.

Questions are being raised whether this tender notice was framed in such a manner that no local (Goan company or agency) bidders could bid for it? In the event, no Goan company did, and one Sagar Industries, from Ferozepur, Punjab bagged the tender and entered into an agreement with GFDC on November 13, 2019.

However, after winning the bid, Sagar Industries wrote back to GFDC on December 12, 2019 stating that they would supply quality and standardised products to the department and said, “However, the rates quoted by us are without GST. So, we would like to request the department to give us the GST as per the government norms on the items in tender.”

As per the government e-tender notice, it had been clearly mentioned to quote rates inclusive of all taxes, for destination (GST, packing and forwarding, freight up to destination, loading, unloading, insurance charges and other charges if any). But despite failing to comply, Sagar Industries was still considered by the Council.

As per the comparison the amount quoted for 20 items in different quantities was Rs 72,67,330 before claiming the failure to include GST. After GST the amount came to Rs 77,96,860. A difference of Rs 5,29,530 which was paid additionally, over the tender rates. Besides, GFDC procured four sanitising machines at Rs 20,650, 15 sanitiser stands at Rs 4,590 and 13 goalposts at Rs 38,000. The above goods were purchased on June 10, 2020 during the lockdown period when all sports activities were banned by the Government of Goa due to the COVID-19 pandemic norms. Sports goods worth Rs 51.85 lakh were purchased in the month of June 2020 by the council.

Though the orders for the sports goods were placed on February 18, 2020, they could still have been kept on hold once the pandemic set in and there was uncertainty of when sporting activities would recommence. As there was no such decision, equipment was purchased and all of it has been lying unutilised for well over a year, which, sources said is nothing less than a waste of taxpayers’ money?

This doesn’t end here and there is more, as GFDC hurried to clear the bills.

As per the regulations, once the chairman takes charge, he should have been consulted on the activities in the body. However, that didn’t happen here. It was alleged that the then Member Secretary Aleixo da Costa issued a cheque of Rs 51.11 lakh to Sagar Industries without taking the signature of the newly-appointed Chairman. There was also another discrepancy here as, the Member Secretary cannot issue cheques of more than Rs 10 lakh to a party without discussing this at the council meeting.

Who are Sagar Industries?

The letterhead and invoice of the company clearly state that they are a house of surgical, scientific and medical equipment and general order supplier, with their head office at Ferozepur City, Punjab.

It has also been brought to Herald’s notice by an insider, that the equipment has not been used till date and is of substandard quality. Where previously, reputed brands such as Nivia was supplied to GFDC, this time equipment of an unheard of brand was given to the State Football Development Council. When asked about the quality of the equipment procured, a GFDC official stated, “The equipment is sub standard. I am sorry to say this, but this cannot be used for long.”

Since Dr Rufino Monteiro stepped down as chairman of the Goa Football Development Council in November 2018, GFDC was run by the then member secretary Aleixo da Costa until the appointment of Brahmanand Shankwalkar, though, when the Chairman’s post falls vacant, it is the vice chairman who should have been in charge of the body. However, that didn’t happen at GFDC. It was the Member Secretary who took full charge of the body and remained the signing authority for all cheques issued by GFDC.

Under the rules of the Council, it is only the chairperson who has the powers to sign and issue cheques above Rs 25 lakh while the Member Secretary can issue cheques of not more than Rs 10 lakh.

The GFDC Order GFDC/1-1-2012/1307 dated 16/3/2016 states, pursuant to the decision of the General Body in its meeting held on 29/7/2012 the council is pleased to delegate following financial powers to the Authorities of the Council as indicated against their designations herein below:

When queried on this, Costa denied the allegations saying the RTI documents provided were wrong. “I have never exceeded my expenditure powers specified in the bye laws,” Costa said. “The signing of cheques are certified in the bye-laws. I have never signed an expenditure cheque amounting to more than Rs 10 lakh,” the former member secretary added.

There is more unearthed, as the second signatory for the cheques was an employee instead of a council member. It is given to understand that the accountant, who was the signatory, was not a full time employee of the organisation.