Gauging the impact of 3 linear PROJECTS on POLLS

For the last few years, locals and citizen groups from across the State have been protesting against the three major infrastructure projects, which they say will cause dire consequences to Goa’s environment, forests and also lead to the destruction of a large number of houses too. KARSTEN MIRANDA speaks to a cross-section of people who have been opposing these projects against the backdrop of the forthcoming State Assembly elections. The question is simple – how much of an influence will these issues have on the electorate and the polls? 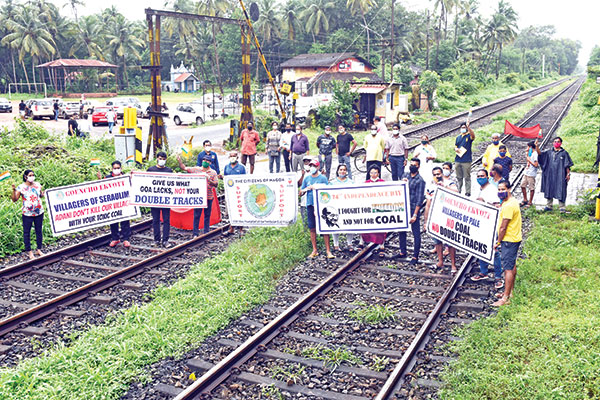 With Assembly election on the doorstep and restrictions in place across Goa due to Covid and the code of conduct the candidates are having tough time to campaign with a ban on public meetings and limited supporters for their door-to-door interactions with their voters.

Be it aspirants or the sitting MLA, whenever they knock on the doors of their constituents, issues these candidates plan to take up if elected, are discussed at these short encounters.  In many such cases, voters have asked them not only about what their opinion is on the three linear projects but also what they have done personally when the people were protesting on the streets.

“We sent the candidates back. Where were they when we have been taking up these issues? The coal hub and its expansion will change Goa and our lives and for us we want to know if the legislators will fight for us. We are already facing problems due to dust accumulation,” said Siddesh Kamat from Mormugao.

However, it is the view of the ruling BJP party that these issues will not have an impact on the elections and they refer to the Zilla Panchayat (ZP) elections, where BJP won handsomely across the State including the “the few areas where there were strong protests”.

They further assert that the proposed double tracking project, the laying of the power transmission line and the expansion of the National Highway will benefit Goa substantially, despite what their critics have been saying.

“There is a silent but a huge wave of resentment building up across South Goa and especially in the areas of Mormugao and Salcete which was witness to massive public protests since the past many years against the coal menace and the most unjust railway double tracking which will perpetually obliterate our verdant countryside, destroying our health, our homes, farmlands, our village water bodies etc. if allowed to fructify. An image is being created by the current political dispensation that the Coal issue is not relevant anymore, considering that a disoriented opposition did not put up even a semblance of a fight for the ZP elections,” said  Orville Dourado Rodrigues Founder Member of Goencho Ekvott (GE).

GE has been one of the groups at the forefront of the struggle against the three linear projects, especially railway double-tracking.

“Despite the ZP elections being irrelevant for us, the government went about stating that coal and double tracking was not an issue in Goa anymore. Yes, we the civil society is eagerly waiting for 14th February 2022, to vote out all the MLAs and ex-MLAs  who betrayed us and played to the tunes of the capitalists. This election is possibly the last opportunity to put a halt to the nefarious design of a most unjust government,” Rodrigues added, while referring to the three linear projects.

Elsewhere, Abhijeet Prabhudesai, co-convenor of Goyant Kolso Naka who held meetings in various parts of the State and met the Central Empowered Committee appointed by the Supreme Court on these projects, also asserted that saving Goa from the coal hub plans should be of paramount importance.

“We hope that people will see through the dramatics of political parties and vote for the person who will protect Goa from coal, infrastructure projects and environmental destruction,” said Prabhudesai.

Vasco-based Sherwyn Correia, the young crusader who has filed a PIL against coal pollution in the High Court, shared his insights too.

“As of today, I think that the Goan voter is confused. Nonetheless, the forthcoming Assembly elections may not be a barometer of public opinion insofar as the three linear projects, etc are concerned. They are not a referendum on these projects. There could be an array of reasons why one chooses to vote for a particular party or candidate; preservation of Goa’s environment and unique identity could be one of them,” he said.

“Young people are waiting to see the manifestos of political parties and serious independent candidates that are expected to unfold in the next few days, particularly on how they will deal with environmental issues, on plans to turn Goa into a coal hub & transportation corridor, job security for Goans and preservation of our unique identity,” he said.

Anti-coal crusader, Felix Furtado from Chandor who has also taken the fight to the courts in addition to protesting on the ground was of the firm opinion that these projects as well as related matters will have a bearing on the polls.

“The three linear projects will definitely affect the prospects of BJP at the ensuing elections. BJP is misleading the people by saying that they have won ZP elections, despite these projects. The fact is, people were not aware of the extent of damage these projects would cause. Now, a lot of activists have educated the people of Goa, not only on the three linear projects, but also on the Sagarmala project, MPT’s jurisdiction over our beaches, increase in Coal transportation through Goa, nationalisation of rivers, etc,” he said.

In Guirdolim, Agostinho Antao, who has been recently taking on the Railways who were attempting to fill low-lying areas and water bodies for the double tracking project, felt those MLAs, Ministers who had supported the projects will feel the pinch from the voters this election.

Xencor Polgi from Headland Sada, who has been creating awareness about the destruction of the projects passing through the forests, had a different view.

“These candidates, especially those who were with the government, have deliberately sidelined these issues. They don’t talk about it now. People are being fed with lollipops instead. After the elections, these projects will be pushed to the limelight again. Goans should decide now as these coal-related projects are only helping selfish individuals and being pushed on Goans for their benefit.  People have in large numbers opposed these projects tooth and nail and the elections where they can make a difference in helping to stop these projects,” he added.

Incidentally, videos are presently circulating of candidates who have in the past spoken in favour of the projects but are now speaking against them.  So also are comments from politicians who were earlier castigating the BJP government for trying to get these projects implemented in Goa but later joined the ruling BJP party much to the surprise of many.

“Our opposition to the three projects transcends politics, in that we will continue to fight to protect Mollem, irrespective of which party comes into power this year. We have seen instances of MLAs speaking in favour of the campaign at the legislative assembly, only to watch them jump into the same camp as the present ruling party a few months later,” said Divya Sahasrabuddhe, of the ‘Amche Mollem’ group.

Another member of the Amche Mollem, Farai Divan Patel group, who has an MSc in Wildlife Biology and Conservation from the National Centre for Biological Sciences, reiterated that they will not stop taking up these issues

“No matter the election outcome, we have seen over the last year that young Goans understand the importance of a more sustainable future for the state. The concerns regarding environmental destruction will only increase as the impacts of climate change become more severe. The time to act is now and we hope that political leaders realise this. To reflect this growing environmental awareness, the campaign in consultation with various youth and environmental groups, has drafted Goa's Green Manifesto which we hope will gain political support considering its importance to the prosperity and happiness of Goa,” he said.

Anthony Da Silva, from Velim, who has handed over memorandum to the national leaders, asking them to scrap the linear projects, opined that people had to come on the streets because the government was not listening to them and that elections are thus a vehicle for such people to bring about the change they want to see.

“The results are determined on different factors due to multiple parties contesting the elections. So winnability is not directly linked to the protests but that doesn’t take away how crucial these issues are. People want such destructive projects to be removed from Goa and are questioning why our small State is being used as a transit point for coal that is needed elsewhere. This will be on the voter’s mind. Goa has to be spared and saved for prosperity and the future generation,” he added.

Social activist Jose Maria Miranda also stressed that these projects and others need to be considered before one casts their votes.

“At every Assembly election, issues concerning Goa and Goans need to have priority over the development of our own constituencies. Coal corridor, three linear projects, casinos, Mopa airport, nationalisation of rivers, etc are bound to affect our health, lives and livelihoods and hence need to be our major concern and any Party which supports these or is silent on them, must be rejected. Unfortunately, we, Goans, tend to look primarily at our own selfish interests or those of our constituency rather than look at the bigger picture which is Goa,” he said.

“Our MLAs divert people’s attention by developing their own constituency to please their constituents, while supporting and being involved in destroying the rest of Goa. This is what the 10 traitors did and there are still people supporting them. Linear projects will destroy heritage, houses, fields, hills, wild life sanctuaries, forests, divide villages, usurp our scarce land, etc only to benefit rich industrialists,” he added.