Goa’s tourism industry heaved a sigh of relief after the government announced the charter flight would arrive in Dabolim next month. After suffering for over one and half years due to the Covid pandemic, stakeholders are having a smile on their faces with the hope of reviving their livelihood. STHRIGDHARA NAIK talks to some of those directly connected to the tourism industry and gets a picture of how the State will fare in the season and what they expect to be done to save tourism after a lull during the pandemic 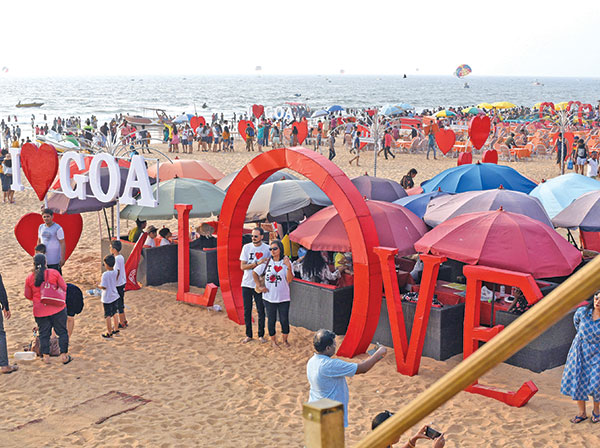 The tourism season has already begun in the State with Tourism Ministry welcoming the guests after a long covid-break of almost a year and a half. Although the domestic tourist has started arriving, the tourism dependent livelihood seems to be having all eyes on the international tourists in a hope to cope up with the losses incurred during the Pandemic. As new-year is appearing closer day by day and with Goa expecting its first chartered flight to arrive in the third week of December, tourism dependent lives are leaving no stone unturned to welcome the foreign tourists.

“Thanks to the department of Tourism for bringing in at least the fully vaccinated Indian tourists. This step will help the tourism dependent families along the coastal belt to earn their bread and butter without disruption”, said Pele Fernandes, the owner of Pele’s water sports and activities, Benaulim. The tourism season will not boom this time but will still be better than the worst Covid times. “We will not revise; neither increase nor reduce the rates of water sport activities with the entry of the International tourists. I believe, with the entry of domestic tourists the tourist season have already started full-fledged,” he added. Adding further he said, “Although the tourism sector is waiting eagerly for the arrival of International guests, the perception of locals that foreigners fetch you more money has been already proven wrong. The domestic tourist spends as much as that of International tourist”.

“Goan beaches have already started receiving a huge crowd of Indian tourists. Among all the others, Calangute beach is seen in sorry state ever since. We collect almost 100 bags of litter from this beach-line”, responded John Montero, Operational Manager of Karnataka Commercial and Industrial Corporation Private Limited (KCIC Pvt Ltd). The major portion of the garbage collected daily includes less of the marine debris and more of freshly littered garbage on the sea shore”.

Adding further he said, “we have deployed a staff of 7-8 people on the most crowded coast such as Arambol, Querim, Calangute and 3-4 persons on the less crowded ones such a Benaulim, Varca and Colva. The addition or deletion of staff deployed on a beach totally depends on a crowd and the number varies on day-to-day basis. On an average, North Goa beaches generate the litter double of what the South Goa coastline generates per day, added Montero. “KCIC has placed dustbins at a distance of every 50 metres with an exception of its placement at 20m on Calangute beach, but in vain. Sadly, domestic tourists litter more than the International tourists,” he concluded.

“Drishti's lifesaving force has already prepared for the tourist season which has commenced. The deployment of lifesavers has been increased across beaches, especially on the popular beaches which have high footfalls”, informed Navin Awasthi, Operations Head of Drishti Marine.

Informing further Awasthi said, on an average Drishti deploys 10 to 12 lifesavers across the 40 coastal areas in Goa (38 beaches, Dudhsagar Waterfalls and Mayem Lake). On the popular beaches such as Baga, Calangute and Colva Drishti has ramped up deployment to 15 to 18 lifesavers on an average.

“One to 2 Jet Skis are stationed at all key beaches and 1 to 2 jeeps patrol regularly at each of these locations. Also, every tower and jeep has a high powered 2-way radio set installed to enable a strong communications capability,” added Awasthi.

More than a fortnight has passed since we have made the shacks operational. We are eagerly waiting to receive the foreign clients, after a huge gap of two years. The arrival of charter flights next month is a very good sign. We are all set to welcome the foreigners but the few shack owners in Baina are facing difficulty in getting NOC from MPT. Now that there is some hope of earning, the shack owners are facing hardship in setting up their shacks on the coastline,” said Cruz Cardozo, President of the Goa Shack Owners Welfare Association. Adding further Cardozo said, “this will not only affect the shack owners but other stack holders too might have to face the consequences. Government should not hand-over our coastline to the MPT. The State MPs should intervene and get our things back”, he concluded.

“We welcome all brands of tourist with equal respect irrespective of whether they are National or International. The tourist causing menace in State must be controlled by enforcing the laws and taking strict action against those creating nuisance. We can’t blame the tourists every time for being undisciplined, rather the authorities should keep a genuine watch on nasty tourists and address the complaints at the faster rate to curb the effect”, responded Savio Messias, owner of Vasco da Gama’s Bismark restaurant and the former President of Travel and Tourism Association of Goa (TTAG). Adding further he said, tourists must understand that Goa is a decent state and they are abided by certain rules and are bound to behave accordingly when in other State. It is their sole duty to uphold local customs and to consider the laws with respect and at the same time should also be mindful of cultural and religious beliefs,” Messias added.

Adding further he said, “as far as the arrival of charter flights are concerned, the hotel industry is waiting with open arms to welcome the foreign travellers. There were hotels which were only catering to charters and they were not having much domestic market. Such hotels which were completely shut for a year or two will now be operational, which is a good sign of revival”.

Messias further informed that the rates of hotel rooms might be revised depending upon the supply and demand situation. The room inventory in Goa is quite high and therefore we require the long-stay clients, the International tourist. ‘There was pre-covid time when around 70 to 80 flights per week used to arrive which are restricted to hardly 2 to 3 flights per week.’

Answering to the question Messias said, although government has declared to distribute first 5 lakh free Visas to foreigners interested in travelling to India, the travel restrictions on Russian tourists will prove to be the bottleneck. Russians are the imperative source of Indian tourism market; but are unfortunately restrained from taking flight to India due to rise in Covid cases in their home country. The British tourists alone will not be able to fill up this gap and hence there is not much relief to the hotel industry, he added.

“Instead of reducing the licence fees and giving some relief, the Department of Tourism preferred pressing salt on our wounds by increasing the fees eightfold for this season,” Geraldine Fernandes, the owner of Patxa guest house Benaulim said crying foul. “Since ours is the small guest house, we mostly deal with domestic tourists. Unbounded by the strict law and order, domestic tourists sleep in the vehicle or at the beachside, cook at the roadside which badly hits the stakeholders like us who run small business. The guests if asked for the RTPCR tests carelessly says ‘when they don’t ask it at the border why are guest houses becoming so clingy about the RTPCR?’ The government officials should consider imposing the laws in stricter way so as to make tourist fall in order,” said Fernandes.

“We have not increased the taxi fare even with the increase in fuel prices and have decided to keep it same even upon the arrival of foreign tourist as well", responded Roque Fernandes, a Taxi Owner. The Pandemic has hit us real hard. The sign of arrival of charter flights are showing some hope of light,” he added. “The customers hiring a taxi are charged at a fixed rate of Rs.24 per km,” responded another taxi driver.

“We have increased the cost of renting a bike from Rs 200 to Rs 300 per day for this season,” said Peter Fernandes, owner of ‘rent a bike’. “Our business is flourishing with the arrival of domestic tourists. We prefer renting a bike to a local tourist then to a foreigner. The foreigners rent a bike and leave it anywhere while returning while a domestic tourist systematically hands it over to us,” he added.

‘We are eagerly waiting for the foreigners to arrive but at the same time are equally scared since the pandemic is not over yet. We will follow all the SOPs, will make the use of mask and hand sanitiser compulsory.” said Gaurishankar Singh a Shack Manager of Shack Anthony.

Rajiv De of the Ocean said, we will use non-contact temperature assessment device for assessing the body temperature and at the same time will make it mandatory to use the mask.

“The department of tourism has been asking for the revision of guest house licence fees from decade which the government has approved finally. Since the renewal fees has been increased to manifold, in order to reduce the burden on hotel tourism, government has decided to give 50 percent rebate on the hiked charges, the notification of which will be released soon,” informed Rajesh Kale, Deputy Director of South Goa Tourism Department.

“Tourists visiting other places should behave well Since the Covid is not over yet we will urge them to follow SOPs and follow all the precautionary measures to curb the spread of dreaded virus, responded Fr Freddy Braganza, Executive Secretary of Centre for Responsible Tourism.