It’s been nearly a year now since the Waste Management Ministry, under Michael Lobo, was formed. But 365 days and counting...does the Ministry and the Minister have anything to boast about? Oh Yes! The Norway-Sweden trip in October 2019, wherein a government delegation, which also included journos, explored various waste management methods, to be implemented in Goa; but as we complete 9 months of the tour, the ground reality seems to be the same; wherein the coastal State still finds it tough to have a solution to the haunting garbage issue. SHWETA KAMAT reports 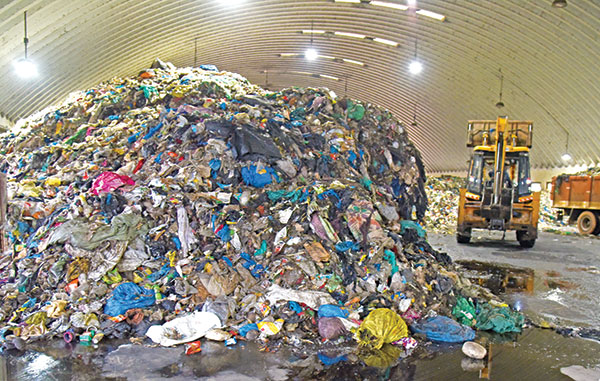 While the Saligao Waste Management Plant; though working efficiently, is always in the middle of a controversy, the much-delayed Bainguinim, Cacora treatment facilities are yet to take shape. After initial legal hurdles, though the construction of Cacora plant for South Goa has kicked off, the financial crunch in the current COVID pandemic has forced the government to keep the Bainguinim project on hold- a centralized waste management facility.

Similarly, the Common Bio-Medical Waste Treatment Facility in Kundaim industrial estate and the E-Waste treatment plant at Pissurlem, are still considered to be in progress.

While making Goa a garbage-free State is a distant dream; the authorities have failed to ensure effective implementation of a ban on single-use plastic and plastic below 50 microns.

"Waste management has been a complete disaster. The situation is going from bad to worse. Money power is currently ruling the waste management system and there is no State interest," said activist, Abhijit Prabhudesai.

“The State government has been a complete failure when it comes to waste management. There is no vision. They have a concept but zero implementation. State needs a decentralised waste facility and a vision for next 25 years. Also, plants are being proposed without conducting any feasibility study,” added another  activist Rama Kankonkar.

“For the last one year, I haven’t see any much work being done by the Waste Management Dept other than just pushing for big plants like Saligao expansion against the interest of the people. I feel, in the absence of a centralized waste management facility, every panchayat is duty bound as per MSW Rules, to handle and treat their own garbage, which is not happening,” said architect Dean D’Cruz.

Below is the status of  the projects:

Goa Waste Management Corporation (GWMC) signed a memorandum of understanding with the Norwegian company SINTEF for disposal and recycling of construction debris and waste. Finding it tough to get hold of a solution to the garbage issue in the State, the government decided to team up with a Norwegian company for solutions to the issue.

During the visit, the State government planned to set up a construction and demolition (C&D) waste recycling facility based on Irish Technology with assistance from SINTEF. The facility was supposed to come up in North Goa, while a plant for energy generation was proposed in South- both on public-private partnership (PPP).

This was followed by the visit of Ambassador of Norway to India Hans Jacob Frydenlund for further establishing collaboration between Goa and Norway on waste management technology.

A technical team from Norway was supposed to visit Goa to carry out a study on climate and weather conditions for quick exchange of technology and information on waste management. This however is yet to happen and the reason can be attributed to COVID-19 pandemic and lockdowns across the globe.

“We have already identified land for C&D plant and for energy generation. The land is also taken in possession. The current financial situation has forced us to put a break to our proposal,” Waste Management Minister Michael Lobo explained.

This is an integrated Solid Waste Management Facility (SWMF), a state of art facility set up in 2016, which is scientifically managing waste generated by 29 local bodies along the North coastal belt, and additionally, the plant also caters to beach cleaning waste and highway cleaning waste.

The plant was designed for 125 tonnes Per Day (TPD) capacity. The facility was built on an existing 20-year-old 73,198 tonnes waste dump after remediation of the same.

However, with no other garbage management facility in place, the State Cabinet in October 2019 granted consent for expansion of the facility to 250 TPD. The move has been strongly opposed by the locals including ex Minister Jayesh Salgaoncar and Congress.

“People of Saligao were promised that the  Calangute garbage dump lying on the Saligao plateau would be treated, but the garbage is still lying untreated. There are new huge dumps of plastic waste, behind the plant, of the size of two football grounds and a 10-metre height that have not been treated. In the name of treating waste from other panchayat, government wants to expand the project which will cause major nuisance,” said MLA Salgaoncar.

An environmental clearance for the expansion has already been obtained and the State is likely to seek funds from Central government under Swachh Bharat Mission for expanding the facility, which will now cater waste, even from Central Goa like Panjim, St Cruz, St Andre, Taleigao, etc.

No doubt, the govt has laid its focus on this plant, while the other facilities seem to be lacking much behind. But there are people,who have pointed to problems with this plant too.

After much delay and judicial hurdles, the project, which was envisaged in 2013, finally kicked off on December 19, 2019, when the foundation stone for the project was laid.

The GWMC is in process of setting up the 100 TPD plant, which is in line with the Saligao waste treatment facility.  The plant, which will handle waste across South Goa, will be completed by December 2021. “The plant will take care of the entire South Goa waste. The way we have handled the North coast, the South coast will be also clean and managed well on the garbage front,” Minister said.

Common Biomedical Waste Treatment Facility (CBMWTF) is proposed to come up at Kundaim. The State currently has no facility to treat its bio-medical waste. GWMC has appointed an agency for setting up the CBMWTF at Kundaim and the work of the same is in process.

The ongoing COVID pandemic has forced the State government to keep on hold Rs 240 crore, Integrated Solid Waste Management Plant (ISWMP) at Bainguinim, considered to be a centralised facility for the State.

The Corporation of the City of Panaji (CCP) had, in 2009, acquired 1.71 lakh sq mtrs of land at Bainguinim to set up the ISWMP to handle the waste generated in the State capital. However, the proposal was caught in a legal battle, following an objection raised by the local village panchayat.

In 2017, the project was handed over to Goa Waste Management Corporation (GWMC) with CCP transferring the land to the waste corporation.

In January 2020, the project got environmental clearance and the State was supposed to seek Rs 100 crore in financial assistance from the Centre.

“The project will come up on BOOT basis ((build, own, operate, transfer); wherein the State will only invest in providing the land. The current financial position has forced us to keep the facility on hold. Once everything gets on track, the expression of interest will be floated,” Lobo said.

The GWMC has identified 11 legacy dumpsites in the State and taken up the work of remediation of these legacy dumps. Other than the 11 sites, till date the State has remediated approximately 1,23,000 tonnes of waste from legacy dumps at Saligao, Cacora and Aradi.

The remediation of State’s one of the oldest garbage dump- Sonsoddo dump commenced in December, last year.

Though started at a very slow pace, the Corporation claims that nearly 40 per cent waste has been remediated so far; while another 60 per cent waste from Sada dump is being cleared.

The works contemplated under this contract consist of collection, segregation (into a minimum of 4 fractions of dry waste such as (i) paper/ cardboards (ii) HDPE / PET (iii) glass & metals (iv) LDPE & other non-recyclables and wet waste) transportation of solid waste from National Highways, State Highways and Other District Roads and transporting it to the nearest facilities designated by GWMC from time to time.

GWMC in association with e-waste management solutions provider 'Karo Sambhav', has been conducting awareness sessions on e-waste in schools, colleges, industries and other places.

Approximately 41.5 tonnes of e-waste has been collected as of March-2020.

The corporation has identified two plots of 4,000 sq m each in Sanguem and Pissurlem for the purpose of e-waste management in the state. The tendering process is on to identify an operator to set up a dismantling facility, which will cater to around 15 tonnes of e-waste per day.