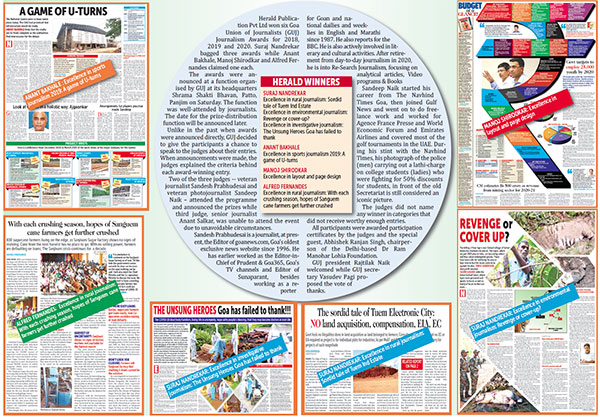 The awards were announced at a function organised by GUJ at its headquarters Shrama Shakti Bhavan, Patto, Panjim on Saturday. The function was well-attended by journalists. The date for the prize-distribution function will be announced later.

Unlike in the past when awards were announced directly, GUJ decided to give the participants a chance to speak to the judges about their entries. When announcements were made, the judges explained the criteria behind each award-winning entry.

Two of the three judges -- veteran journalist Sandesh Prabhudesai and veteran photojournalist Sandeep Naik – attended the programme and announced the prizes while third judge, senior journalist Anant Salkar, was unable to attend the event due to unavoidable circumstances.

Sandesh Prabhudesai is a journalist, at present, the Editor of goanews.com, Goa's oldest exclusive news website since 1996. He has earlier worked as the Editor-in-Chief of Prudent & Goa365, Goa's TV channels and Editor of Sunaparant, besides working as a reporter

for Goan and national dailies and weeklies in English and Marathi since 1987. He also reports for the BBC. He is also actively involved in literary and cultural activities. After retirement from day-to-day journalism in 2020, he is into Re-Search Journalism, focusing on analytical articles, Video programs & Books

Sandeep Naik started his career from The Navhind Times Goa, then joined Gulf News and went on to do freelance work and worked for Agence France Presse and World Economic Forum and Emirates Airlines and covered most of the golf tournaments in the UAE. During his stint with the Navhind Times, his photograph of the police (men) carrying out a lathi-charge on college students (ladies) who were fighting for 50% discounts for students, in front of the old Secretariat is still considered an iconic picture.

The judges did not name any winner in categories that did not receive worthy enough entries.

All participants were awarded participation certificates by the judges and the special guest, Abhishek Ranjan Singh, chairperson of the Delhi-based Dr Ram Manohar Lohia Foundation. 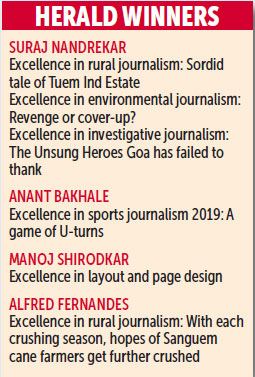