Come COVID and tourism along with few other industries and sectors have fallen flat and that was quick and fast. The technological revolution that brought us closer together by making travel and tourism easy and affordable is of no use as tourists are not willing to risk and travel but the good news is that the hospitality sector, especially the high-end ones, are taking all precautions for their guests. According to the World Travel and Tourism Council, the trade group, representing major global travel companies, projects a global loss of 75 million jobs and $ 2.1 trillion in revenue. In India domestic tourists kept it going for Goa for a brief period till the second wave hit. VIKANT SAHAY talked to tourism stakeholders in Goa to know more about how their businesses were affected. 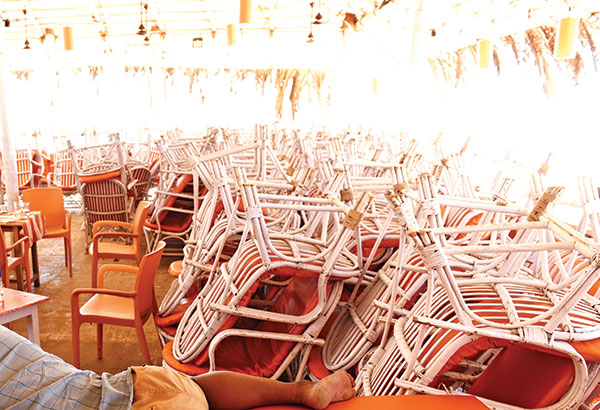 The business of tourism is not showing good signs. With no chartered flights and virtually no foreign tourists, the “load” has been taken over by the domestic tourists but it has worsened and declined since March this year as Goa registered a high number of COVID positive cases. In fact at one point of time Goa happened to be one of the most “COVID positive” States in the country. With casinos clamped down, beaches barren, restaurants and shacks closed, the tourism sector, including all their stakeholders which include hotels and taxi business, have come to a screeching halt.

Victor Albuquerque, chairman and managing director of Alcon-Victor Group, a very seasoned and experienced person in the hospitality sector in Goa, was of the view that hospitality sector as of now is completely under shut down. “When Goa had opened up after the lockdown last year, the business was very good and that period was much better than the previous year 2019-2020. Although the tariffs were reduced, the occupancy was high as the people were tired of being locked down. I would say that in terms of percentage loss as compared to the full last tourist season to this tourist season is about 70 per cent,” Albuquerque told Herald.

He is not the only one to quantify the losses as being so high. Travel and Tourism Association of Goa (TTAG) vice president Jack Sukhija, who is also in the hospitality business, said, “If we compare six months from October 2019 to March 2020 as against October 2020 to March 2021, the drop would be a minimum of 50 per cent in business. For most it would be 65-80 per cent with around 2500 establishments not even opening.”

In agreement is First Class Holidays director and a member of TTAG, Atish Fernandes, who is an expert in the local travel taxi services like arrivals, departures, cars for local use in Goa, etc, said that from October 2019 to March 2020 as an average rule for this period they were already operating 30 per cent below the period from October 2018 to March 2019. “The drop in business during the tourist season   October 2019 to March 2020 and October 2020 to May 2021   is estimated at 40 per cent on an average and hence the loss has been huge if one compares 2018-2019 season or 2017-2018 season. The situation is so bad that people are not willing to travel,” said Atish Fernandes.

What hit the tourism industry is the complete absence of the foreign tourist. Chief Operating Officer of Sita Travels in Goa, Ernest Dias, who is engaged in charter flights to Goa is of the opinion that international tourists dropped by 95 per cent. “We had domestic tourists coming to Goa till March this year. Lot of weddings were happening in Goa but the business went to 4-5 star hotels. Even taxis were being used. Though the upmarket star hotels did very well the lower budget hotels suffered very badly. Interestingly the buses and the mini buses which used to operate during the arrival and departure of charter flights remained parked and had no business,” Dias said.

He added that when the lockdown was announced last year in March and the repatriation flights were pressed into service for the foreigners who were stuck in Goa made them see how many foreigners were visiting Goa. “There were so many foreigners. There were at least four to five flights for Germany alone. Many other countries had their flights to repatriate their citizens from Goa,” said Ernest Dias.

TTAG president Nilesh Shah believes that tour operators, travel agents and small budget hotels have suffered the most during this pandemic. “Yes tourism industry has suffered the most during pandemic. In October last year just before the curfew was introduced in Goa, of the 3500 hotels only 1400 had started their operations. Over 2100 small to medium sized hotels remained completely shut primarily due to shortage of staff and several other overhead and running costs, etc. Also many trained hotel staff, who left Goa, are unwilling to come back,” said Shah.

When quizzed on the comparison between the previous to the just-ended tourist season that is October 2019 to March 2020 and then October 2020 to May 2021, Nilesh Shah said, “Since October 2019 till March 2020, things were normal as charters were flying in but since mid-March last year there was a sharp decline and there was absolutely no business till May 2020. Again when the lockdown started opening up then since October 2020 the domestic segment picked up in a big way.”

He further added that during November 2020 the casinos too opened. “Despite no charters the domestic tourists and those interested in casino landed in Goa from all quarters since the State was ‘more friendly’ towards the tourists. Hotels did follow SOPs and protocol and they did good business during that period. Indian Super League (ISL) also happened around that time along with destination weddings and Meetings, Incentives, Conferences and Exhibitions (MICE) tourism. The domestic airlines industry landing in Goa was operating on full capacity and they opened up several new sectors so that more could come to Goa. However, during this time only the luxury hotels could do business and that too only up to 50 per cent and the normal budget hotels did business up to 20 per cent,” said Shah.

Luxury hotels did better. The Indian Hotels Company Limited (IHCL) currently has the highest inventory in Goa with eight hotels, seven bungalows and over 1500 rooms, offering a complete spectrum of brands. Despite continued pandemic related challenges that have impacted the travel and hospitality sector.

“We developed innovative revenue streams to meet evolving customer needs. Keeping the well-being of IHCL's guests and associates at heart, we introduced Tajness – A Commitment Restrengthened; enhanced and exacting safety protocols developed in accordance with the norms laid down by World Health Organisation (WHO), Food Safety and Standards Authority of India (FSSAI) and the Government of India. The recovery was primarily driven by domestic leisure travel and resumption of weddings in smaller numbers,” said Vincent Ramos, Area Director, IHCL, Goa and General Manager, Taj Resort & Convention Centre.

Ramos added, “The initiatives helped the company achieve month on month growth and resulted in similar numbers to the tune of 97 per cent of the business from Oct 2020 to March 2021 as compared to the last year same period. The period from April 1-20, 2021 was almost as good as the previous quarter, we registered 65 to 70 per cent occupancy rates at most of the properties.”

He went on to add that, “In the second wave of the pandemic, with the number of cases increasing across the country and reduction in travel, our occupancy levels started to reduce impacting the business in the short term, but I remain cautiously optimistic about the long-term outlook. The hotels in Goa will continue to evolve to cater to dynamic market trends whilst keeping safety and our core philosophy of Tajness at the heart of the customer experience.”

Gaurish Dhond, President of the Hotel and Restaurant Association in Goa, told Herald that, “Since October 2020 to January 2021 tourism business had picked up and we can term it to almost to normalcy but with sudden rise in COVID wave and late lock down, entire industry has collapsed. It will take one year at least to recover from where we were in December 2019. Thinks are bad in Goa, let’s pray and hope for better days ahead.”