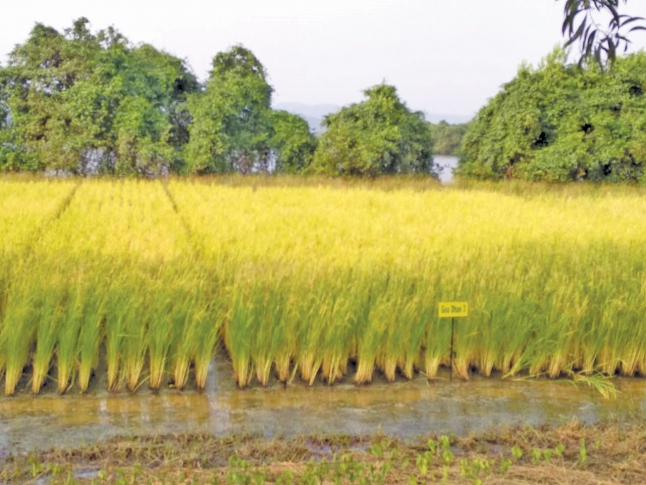 The impact of climate change is being felt in all spheres of life including agriculture. As far as horticulture on the west coast is concerned major crops like coconut, cashew nut, arecanut, bananas, mangoes, pineapple along with spices like black pepper, cinnamon, turmeric ginger and array of vegetables are grown and are getting very badly affected by the impact of climate change, causing massive losses to farmers including in Goa. This has led to the numerous ICAR laboratories to start research on developing climate resilient agriculture. The CCARI, Goa is one such institute, with the jurisdiction of the entire coastal belt of India to take up strategic research for conservation and sustainable utilization of coastal agriculture and allied resources.

“In general we knew that the east coast was very vulnerable to cyclones. Of late, we are seeing cyclonic activities on the west coast as well. Unseasonal rains, temperature fluctuation, rise in humidity, all these factors are damaging the crops. Being on the coastline, Goa is equally affected by the impact of weather vagaries,” Principal Scientist, Horticulture, ICAR-CCARI Dr A R Desai said.

Major components of horticulture are plantation crops, fruit crops and spices. All these crops are getting affected due to climate change. These are getting infested with new pests and diseases which are damaging the crops and causing heavy losses for the farmers.

“Mango is one crop which has been badly hit due to climate change. It is a very sensitive crop. Because of early and extended rains, physiology of flowering pattern in mango is getting disturbed. Flowering is not only delayed but even staggered resulting in delayed maturity of early varieties like Mancurad. We are seeing early rains. It was not supposed to be raining during this time but it is happening. We have witnessed rains in March, April and are expecting precipitation in May also,” he said.

It is predicted that the regular monsoon will be starting a little early, in the second fortnight of May itself instead of June 6. This is an unforeseen situation.

“Rainy season is supposed to end by September or October. But last year we saw rains extending up to January. This is a critical period for mango flowering as it should experience a dry spell at the end of November and December so that it gets stressed so that flowering is triggered. Around that time if the soil has got moisture then it will not flower, but continue to give vegetative growth only, thereby disturbing the flowering pattern,” Desai said.

Due to extended rains, flowering is getting delayed. The temperature fluctuation is making matters worse. “Day temperature in Goa is hovering at 33 to 34 degrees Celsius while night temperature drops to 15 degrees. This difference in the maximum and minimum temperature is affecting the flowering and fruit-set of mangoes. It is also leading to more number of insects like fruit flies attacking the fruits. Due to these reasons, yield and quality of mangoes is getting adversely affected. So also in case of cashew, drying of flowers and production of excessive male flowers take place, affecting the yield.

“We can’t directly control nature's vagaries at once. But we can change the cropping pattern. We are seeing that some crop varieties are responding to climate change differently. That’s why instead of going for only one variety, the farmers can go for multiple high yielding varieties of commercial crops at one time,” Desai said.

For example, mangoes don’t go with only Alphonso or Mancurad. Grow different varieties in a staggered way. The farmers will not be at total loss as it will act as a shock absorber.

Coconut is not all season crop. It’s continuously yielding. In 12 months, it is supposed to produce 12 bunches of coconuts. Whatever flowering panicles and bunches are affected by abnormal weather, leave it alone if we can protect the remaining nuts, it will prove beneficial. One such step is introduction of bee hives. It will help improve the nut set per bunch, besides generating additional income and employment.

“Include other subsidiary components like bananas, spices, like black pepper and on the border of the field, we can plant papaya and kokum so that the overall garden will have income not only from coconut but also from so many other components. Livestock components can also be introduced, either milking cows or poultry birds can be reared so that there is a flow of income every day,” he said.

CCARI is also undertaking research on climate resilient agriculture, collaborating with other research institutes and state agriculture universities in the region to tackle the problem of climate change. But it will have its research time lag to show the results.

Then in case of cashew, the cashew ‘germplasm’ is collected from across the State. It is conserved in a field germplasm bank as a reservoir for many yield attributes and abiotic stress tolerance genes, which will be used to breed climate resilient varieties for the future.

It is also a strategy being attempted that based on the prediction models developed by using the long term past weather data, climate change simulated conditions would be used to study the impact and screen the genetic resources tolerant or ability to withstand the onslaught of the weather aberrations of climate change impacts.

In my opinion,  Most climate resilient crops  like jack fruit, jamun, kokum, traditional tuber crops, bamboo, etc, have to be given more focus for including them in the production system.

Planting of forestry/timber trees and bamboo as wind breaks all along the border around the plantation is another vital strategy to protect the plantations.

Protected cultivation is another important strategy, especially for high value vegetables, for successful production, as the production system is partially or totally under controlled environment.

“These are some of the strategies that can be adopted to tackle the impact of climate change,” he said.

“Goa has Khazan lands which have paddy plantations spread over a huge area. Inundation and salinity are two major problems here. Farmers here used to grow local varieties of paddy viz Korgut and Assgo. We thought of improving those local varieties. We have bred them as Goa Dhaan-1 and Goa Dhaan-2. These have great tolerance against submergence and salinity,” Manohar said.

Paddy variety was taken from International Rice Research Institute, which was improved and grown at Chorao Island here in Goa as Goa Dhan-3.

“We also developed Goa Dhan-4, which is a cross between local varieties Jyoti and Korgut. Jyoti is a high yielding paddy variety in Goa, but does not do well in saline conditions. The cross breed is doing very well,” he said.