Is ‘milk tainted’ at Goa Dairy?

For the past many years Goa Dairy is more in news for corruption and mismanagement rather than milk production and profit making. Why is Goa Dairy suffering losses? Reasons are many, finds SANTOSH NAIK. Beside scams and mismanagement and high cost of operations there are various other reasons such as excess recruitment of employees, etc which prevents the Dairy from making a profit 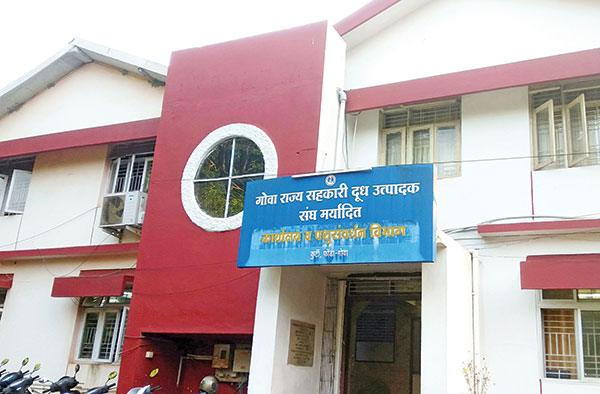 The Goa Dairy was established in 1989 with a member-owned federal body of around 178 rural dairy co-operative societies spread over the State of Goa, having around 191,000 families as their members, with the web site claiming that an average of 65,000 litres of milk is procured per day.

The farmers said after the disqualification of Dairy Board of Directors, the government is now controlling the Goa Dairy for past two years.

Two years ago there was surgical strike in Goa Dairy following complaints of mismanagement in procurement of raw material and machinery, the Registrar of Cooperative Societies (RCS) has disqualified seven Board of directors, dissolved the Goa Dairy Board, suspended the managing director and appointed one member Administrator and thereafter a three-member Administrative Committee led by Durgesh Shirodkar. However the disqualified Board of Directors has challenged the RCS decision in Court and matter is still sub judice.

The farmers are now claiming that the government run plant has neither succeeded in running the Goa Dairy in profit nor improved the milk sale. Hence they demand the government hand over the running of the dairy to the farmers and also conduct an election to have a Board of Directors.

Claiming that there is an excess recruitment by the Government, the farmers had approached the Court to sort out the issue. BoD tenure ends in May 2022.

HOW THE BOARD IS ELECTED

The Goa Dairy Board comprises of 12 Directors and is currently elected by Chairmen of 176 milk Supplying Societies attached to Goa Dairy; 16,000 farmers have right to elect chairman of its 176 societies. These elected 176 chairmen chose the Goa Dairy Board of Directors. The elected directors elect the chairman on the Board. 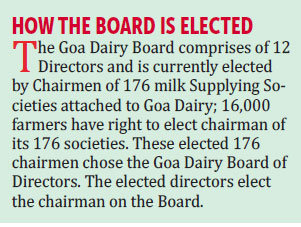 Farmer Anup Desai and others fear that if the Goa Dairy charge is not handed over to Goa Dairy farmers immediately than Goa Dairy may follow the way of Sanjeevani Sugar Factory.

Some farmers suggest that before Goa Dairy turns into another loss making Sanjeevani Sugar Factory, the farmers demand removal of administrators and hold election for farmers appointed Board to run the Goa Dairy Management.

Former chairman Anup Desai feared that if Goa Dairy management is not handed over back to farmers i.e Goa Dairy Board it would sure to follow path of Sanjivani. He said government officials appointed Administrator on Goa Dairy are not resource persons. Therefore the demand from farmers is to remove the Administrator and hold election for fresh Board. BoD elections should be held and Goa Dairy should be operated by Board of Farmers.

Recently former Administrator Durgesh Shirodkar made claims of making a Rs 3.75 crore profit in 2020-21. His announcement, however, was disagreed by others and created quite a controversy when some farmers, including former chairmen rejected his statement and said it is misleading. They questioned how Shirodkar could claim profit without an audit report and an approval by the Annual General Meeting (AGM) which could not be held due to various reasons. The controversy prevails as in absence of audit report of previous financial year it is difficult to know Goa Dairy’s exact financial status, whether the plant made profit or ran into a loss.

Since past one and half year Durgesh Shirodkar was Administrator of tri-member Committee appointed on Goa Dairy. Durgesh said during the year April 2020 to March 2021 he earned profit of Rs 3.75 crore by plugging leakages and controlling corrupt practices. He had claimed that being a son of farmer he managed to achieve the profit while the government officials appointed as administrator in the Dairy run it in losses. However, though he made profit for Goa Dairy he was removed recently by RCS. Veterinary Director Agostinho Misquita was appointed as Administrator of Goa Dairy. 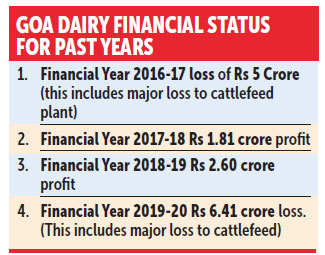 When asked for reaction, farmer Anup Desai and Sanjiv Cuncolienkar both of them refused to buy the claim of Shirodkar that Goa Dairy earned a profit of Rs 3.75 crore. Both of them said he made neither profit nor loss. Former Chairman Rajesh Faldesai too said the profit claim by Durgesh Shirodkar is misleading. “Without conducting an audit how is he claiming profit,” said Anup Desai. “On this background there is need to conduct a research whether Goa Dairy is financially sound. The previous year reports are not approved yet by AGM reckoning it is not prepared by auditors appointed by General Body,” he added.

The farmers in past have also staged many agitations against the price hike in cattlefeed rates which burdened them.

The Government had launched many schemes for improvement milk production including the Kamdenu scheme by former Chief Minister Manohar Parrikar.

Goa’s current requirement of Milk in Market is around 3.5 lakh litre per day but Goa Dairy has no target to achieve this. Today Goa Dairy sells average around 58,000 to 60,000 liter per day milk in Goan Market.

Goa Dairy`s sale was once reached to 90,000 litres per day in past when Anup Desai was the Dairy Chairman. However, Goa Dairy which was expected to increase its sale above one lakh target by now from earlier 70,000 per litre day is now reduced to 60,000 litres per day. The Goa’s rest of milk demand is supplied by other brands including SUMUL. Despite the huge demand in market, Goa Dairy failed to meet market requirement.

The farmers cited that one Dairy Brand at Kundaim produces around 30,000 to 40,000 litres per day with just 50 employees while Goa Dairy that produces around 50,000 to 60,000 litres of milk has around 275 employees. The ratio of 50 and 275 does not appear to match with the production which is very less. The farmers claim that is the result of the plant hiring around 30 to 40 excess staff.

According to farmers the main reason to worry is the reduction in sale. They claim that when Goa Dairy Board was running operation and though it was running in loss, at least the sale was on an average of 71,000 litres per day which has now reduced to 60,000 litres per day during the tenure of an Administrator.

The farmers say that if no account statements are prepared on time, audited and approved in the AGM it is difficult to know financial status of Goa Dairy.

Not only around 16,000 farmers’ families are depending upon Goa Dairy but also around 300 Goa Dairy employee are earning livelihood from the plant. The Employees are demanding to implement seventh pay scale for Goa Dairy Employees which currently pending due to weak financial condition of Goa Dairy.

With regard to former Administrator Durgesh Shirodkar claim of earning Rs 3.75 Crore for a year April 2020 to March 2021, Rajesh Faldesai disagreed with that claim and said it is misleading and also questioned how can Durgesh claim profit without audit report and AGM approval. He said the Administration failed to conduct AGM of Goa Dairy. Rajesh said Goa Dairy previous Administrator hiked cattle feed prices by Rs 4 due to which it appears Goa Dairy cattlefeed plant in profit but Rs 4 hike in cattlefeed is actually burdens on farmers said Rajesh Faldesai.

During his tenure for of past more than one and half years (from April 2020 up to March 2021), Shirodkar said Goa Dairy so far earned profit of Rs 3.75 crore and out of it already Rs 1.5 crore is disbursed as price difference to farmers. He said he adopted cost cutting measures that helped to earn profit every month. He said he plugged leakages and controlled corrupt practices. He said the AGM for the year 2020-21 scheduled in December 2021 could not be held as MD failed to submit certified documents. However, Durgesh was removed by RCS few days back by appointing Veterinary Director Agostinho Misquita as Administrator on Goa Dairy.