Is the survival of Goa not in ‘national interest’?... ...Strong voices speak up in riveting documentary

The Coal Story, a moving hour long plus documentary is the latest compilation of voices, facts and emotion, encompassing the historic people’s movement against three linear projects which people believe will make Goa a coal transportation hub. GARY AZAVEDO deep dives into the documentary and interacts with those who made a film which will become a very important repository of voices on record 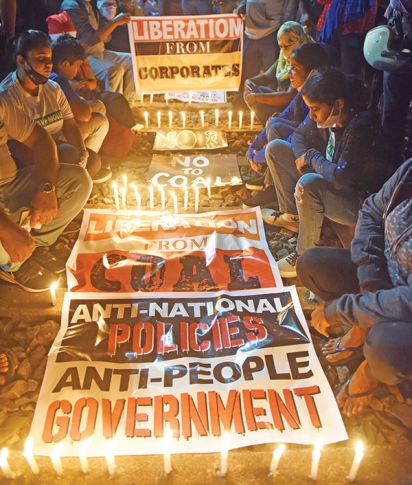 At times, a touch irony sharpens the canvas of theatre. And the theatre here is on the fields and forests of Goa, not converted to virtual battlefields. As war is not just a fight for land and the ecosystem, but of the principle belief that the people of the land have a voice when decisions about their futures are being made.

Goa is dotted with warts of betrayal on this count. Flashpoint Mollem. Flashpoint Arossim. Flashpoint Chandor. And now Tivim. And Colvale, and of course Sangod.

The government protectors have power. The people warriors have some other tools like pens, microphones, computers and film making equipment. To amplify voices, to record truths and frame realities.

The Coal Story produced by the ‘Living Heritage Foundation’ on the You Tube channel of ‘Eco Champions For Goa’ commences with national TV news segments relating to the anti-coal protests in Goa and then shifts focus to the Goan tribal community of Dangars (cowherds) living in the rural hamlet of the Sangod village who narrate their daily existence further expressing their unhappiness over the proposed project of the Tamnar substation situated at a location known as ‘Dev Sheth’ (Fields of God) as it could impact their future. Yes Fields of God. The irony is to stark as the documentary is revealing.

Right at the beginning of the documentary, noted Environmentalist Claude Alvares, referring to the projects being justified since they are of “national interest’ asks a chilling question "Is the survival of Goa not in the national interest?”

Released on Valentine’s Day (February 14), ‘The Coal Story’ has been acclaimed by its appreciative viewers as ‘a long and well researched film worth watching for those who care about the future of Goa and the country.’

“This is the biggest threat in the 60 years of independence of Goa. The government plans to bring 136 million metric tonnes per annum of coal in Goa from Australia at the cost of the lives of thousands of Goans, who are already suffering from the adverse consequences of 60 years of destructive developments. If we don’t wake up now and protest then there’s no going back. This is the problem not only of Goa but of everyone who loves Goa”, say the film makers

‘The Coal Story’ is jointly directed by Mohan Kumar Mochi, Marc Francis and Phoebe of the ‘Living Heritage Foundation’. Narrating their ignorance over the fact that over 3,000 trees were cut during the imposed Covid-19 lockdown, one of the local village activists divulges that they were informed by the media when the “Save Mollem” campaign gained a strong presence online and further gave a detailed timeline of how they questioned their elected representatives over this project even going to the extent of filing a RTI application seeking the project documents.

They opined that the 400 KW transmission line’s electromagnetic fields could cause life threatening sicknesses like cancer, besides other health risks like infertility for women, etc. and suggested alternate renewable energy such as solar and wind could be utilised especially as Goa being a coastal state has high wind flow. Stating that the rocky area had been drilled, besides felling several trees, they questioned the employment categories being provided to the local residents and the afforestation measures to be adopted as they pointed to several flaws in this procedure.

Mitigation measures not even

The activist disclosed that the construction license provided to the Tamnar firm was similar to that granted to residential units with conditions imposed regarding fencing/wall, gate, well, parking, badminton court, etc. instead of inquiring about the mitigation measures of the harmful effects of the magnetic field, draining of transformer oil, etc.

‘The Coal Story’ then moves to the twin villages of Arossim and Velsao in the Mormugao taluka where the villagers again rent their ire over the proposed double tracking pointing out to the huge plastered cracks in the walls of their heritage homes. Narrating their helpless plight, the villagers in unison express their firm opposition to the proposed double-tracking mainly for coal transportation through their scenic coastal villages. They lamented that their children could not sleep at night due to the constant hooting of the passing trains with increasing rail wagons and rakes resulting in impacting their academic performances, besides, also disturbing the religious and cultural events staged at the over 400-years-old St Lawrence Chapel, Arossim.

A villager also expressed her sadness that her life in her matrimonial home in the Arossim village had been impacted by the frequent blaring horns of the passing trains, adding that “the Arossim village had been trisected by the South Western Railways and the Konkan Railways. It is an island not by water but by railway tracks, rakes and noise. Where are we supposed to go?”

‘Railways have only revenue

documents but not ownership 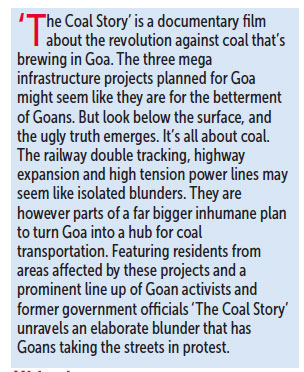 Remarks another Velsao resident displaying copies of old documents in Portuguese, “the railway authorities do not have any ownership documents but point out to the inclusion of their name in Form I & XIV which are revenue documents not ownership documents. Since the land was not sold or gifted, the railway authorities were only permitted to lay their tracks.” Prominent Goan litterateur and Sahitya Academi winner Damodar Mauzo, too, expresses his discomfort and annoyance over the proposed projects, reiterating that sustainable development sans coal was desired by Goans.

Next Stop Vasco, where fishermen

‘The Coal Story’ then visits the Vasco fishermen community who also express their ire over the coal dust pollution spewing from the Mormugao Port Trust (MPT) and their fears over being displaced by the ongoing national highway works. The anti-coal activists divulge that the central government Sagarmala project and the three linear projects comprising of the Tamnar Power Transmission 400 KW lines, double tracking and national highway expansion are interlinked for the primary purpose of coal transportation through Goa to the neighbouring states of Maharashtra and Karnataka at the behest of the corporate lobbies of Adani, Jindal and Vedanta with the Goa government telling falsehoods to the public.

The activists further reiterated that Goa possessed sufficient power and flayed the authorities especially the present Chief Conservator of Forests (CCF) for acceding to this project disturbing the ecology and wildlife in the Mollem wildlife sanctuary.

Former CCF Richard D’Souza, too, revealed that the former Defence Minister and Goa chief minister late Manohar Parrikar’s had firmly opposed the destruction of the Molem forests due to these linear projects.

Nature enthusiast Nirmal Kulkarni also expressed his concern over the safety of the various unique diverse species of wildlife existing in the twin wildlife sanctuaries of Mollem and Baghwan Mahaveer that will be impacted by the national highway cutting through the forests.

Will the government pay heed to the ever increasing voices of those expressing their concern towards Goa, the health and livelihood of Goans and their environment and bow down to their requests of scrapping these projects or will it continue to railroad rough shod over their sentiments and use their brute force of power to crush their dissent?