It’s time to be WATER LITERATE

The Waterman of India, Rajendra Singh, was in Goa. Having been anointed with several awards including Magsaysay Award and the Stockholm Water Award, he passed his wisdom to VIKANT SAHAY on how Goa which has abundance of water can face issues in the future if the State is not “water literate”. He emphasised on letting the people know how precious is this natural ‘gift’ to us, as humans 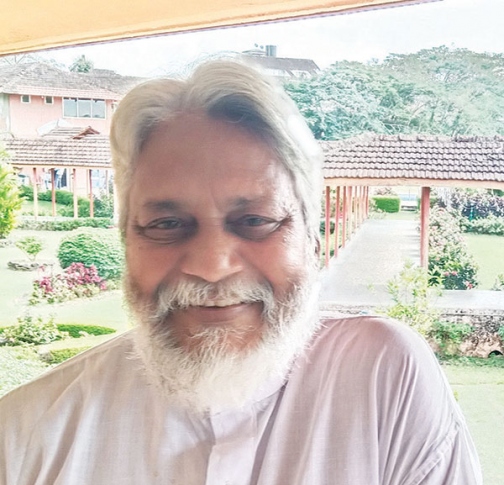 Panjim which ranks one of the highest consumers of water per capita in the country needs to be water literate. The Waterman of India Rajendra Singh who hails originally from the “drier state” of Rajasthan and has bagged several international awards on water conservation that includes the Magsaysay Award and the Stockholm Water Award (also known as Water Noble Prize) is of the view that Goa is “darling boy (Ladla Beta) of India but it needs to have water literacy.” He further reiterated that Goa as a State is having abundance of water and it is “God’s most loved son” in India.

“This darling ward does not need to be misguided but it needs to improve and for this Goa needs to have skill development in efficient use of water there should be a water literacy movement in the state,” said Rajendra Singh to Herald in an exclusive interview.

Chief Minister Pramod Sawant in a programme referring to the statements made by Rajendra Singh assured that, “As we move forward, development and growth is a necessity but this needs to be balanced with environment. In Goa, we get lot of rain but it is necessary that we work on conservation on massive scale. My government would be more than willing to support efforts of NGOs and companies on rain harvesting and other water conservation initiatives. Even though we are the darling son, we assure, we will not be spoilt.”

When asked how the literacy in Goa can be brought about Rajendra Singh replied that it can only be done by the residents of Goa who have the knowledge and the power and if they want me, “I will come and support their movement. In fact, I am in Goa for this and if Goa does any programme on water literacy then I am with them. Also, engineers need to understand the perspective with science, ecology, natural resource, etc, and then do the community driven decentralised water management in the State.”

Rajendra Singh was invited as the Chief Guest for a celebration ceremony of the completion of 30 years of EP Kamat Group in Goa.

He narrated that he had taken up a 40-day foot walk in California in USA Ohnas River in 2015 and it is a well known fact that river and civilisation is linked very closely. “Walking Water was planned and I called 40 people from different countries to undertake this movement. We observed that wherever the modern development entered, the first thing what was done was displacement knowledge, soil, greenery and people. After that construction began. We saw of California’s disaster in three years in front of my eyes. The river started to shrink and virtually was closed in a pipe. Several species of birds, and other habitats started dwindling and have now completely vanished. Now there is only desert and now it has changed into a dead valley,” Rajendra Singh lamented emotionally and added that today our emotions toward water have dried down and we are not connected with water.

According to the Waterman of India, the Third World Water War is on. “Walking connects you to the heart of the earth and the heart of the human. The displacement needs to stop by community driven decentralised water management. The third World War on Water is on. Wherever in the world you go, you will find displacement. Wherever there is displacement the seed of the third world water war is sowed. Displacement is the source of the third World War,” said Rajendra Singh.  At the same breath he mentioned that diversion of Mhadei River should not be done and it should be allowed to flow without disruption.

Pramod Badami, Chief Engineer, Department of Water Resources in Goa government believes that as of now there is no shortage of water in the State but with so many restrictions now coming in, it will be difficult to build fresh dams. “Raw-water supply is the highest in the country in India. The national average is 120 litres per capita, per head, per day, whereas we are supplying around 375 litres. This increase could be because of influx of tourists too. Also, there is a lot of over utilisation of water in swimming pool, kitchen, garden, etc. We rightly need to educate people to go in for economical use of water because although we have enough water as of now we may land into issues, over a period of time. Yes the time could be in another 40 years if we do not become water literate,” said Pramod Badami.

He further informed that the Department of Water Resources has QR coded all the identified water bodies in the State of Goa. “Now we have around 256 water bodies, which have been identified, including wells that we have QR coded. Even the wells in private individual’s houses have been coded. We have done this survey of wells in almost 9 Talukas now; except Canacona and part of Quepem, all other talukas have been surveyed. We surveyed, identified and clicked their photographs too. Now we have taken up project of rejuvenation of water bodies to monitor the quality of water pre and post monsoon,” said Pramod Badami.

When asked about making people aware of this precious natural gift the Chief Engineer of WRD Badami said, “We have held seminars and workshops in the past. I think, we will start repeating those campaigns more frequently. We had brought all the school children, keeping competitions amongst some school children to get innovating ideas about how you save water. Children have good ideas, nascent ideas, clear ideas, their minds are very clear. Now we are also working on economic utilisation of water along with the monitoring of the quality of water.”

On saving of rain water in the State Pradip Sarmokadam informed that, “Goa is not only blessed with rainfall and rivers but moreover we have excellent plateaus in Goa and we also have this traditionally acclaimed Khazaan areas along the river side which are excellent example of surface water management that how the water coming down from the mountains is not allowed to go into river so easily as manmade protection walls were made.”

He explained that this is a protection wall or embankments along the riverside which does not allow land water to just wipe out everything and at the same time does not allow river flooding to enter land. “However, it is not happening as traditionally it would. And that small Khazaan area having a lining of mangroves is also depleting. These are the unique features of Goa. People used to manage it. There was people centric management as there were local communities which were entirely woven and interconnected with the management of the bundhs. This has been replaced with the government system wherein people do not own and they want Government to do the thing. Government cannot do everything. It should be the local community to extend its hand and help the government and do it jointly,” added Pradip Sarmokadam.

He was in same page with Rajendra Singh and said that Water Literacy is essential along with the optimisations of economic use of water and not wastage. “People’s participatory movement for water conservations and water shed management programmes in all the river basin areas. This is something that would really change the picture. Secondly re-use of water must be encouraged and thirdly and most importantly we need to have water literacy and optimise our usage and not waste a drop. Lot of hard work has been done hundreds of years back to protect our natural resources,” said Pradip Sarmokadam.