KTC women employees yet to get their due

Despite all the talks about gender equality, when it comes to hiring women in professional space, the gap still continues not just in the country but also in a progressive State like Goa. VIBHA VERMA finds out that State’s transport entity Kadamba Transport Corporation is facing issues like shortage of women staff and bias 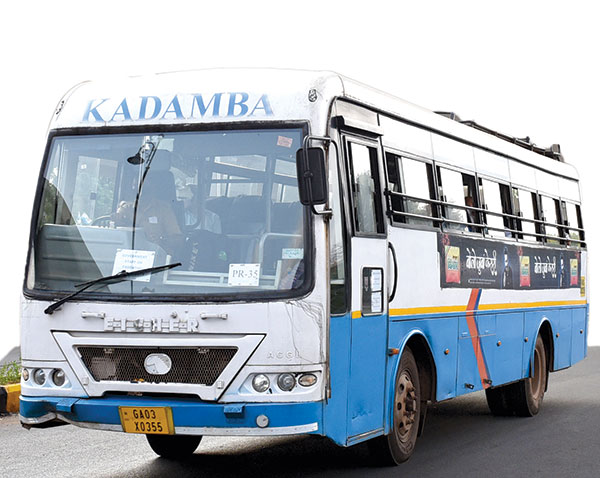 Come elections, all political parties make it a point to promise 33 per cent reservation for women in government jobs, only to be forgotten later. If this was not enough, there’s another related problem that has probably failed to garner attention.

The problem is in fact two fold. One is lack of women staff in some departments and the other being bias against existing women employees plaguing certain departments, if not all.

The Kadamba Transport Corporation Limited (KTCL) is one such department where these issues are very prominent. The women employees of KTC allege that there is a lobby in the Corporation which discreetly works against employing women staff.

However, the positive side is that the top management is determined not get bogged down to the pressure from this lobby and is going full throttle to giving equal rights to women - within or outside the organisation. Sources told Herald that the KTC’s small batch of women conductors is on desk duty, the reason being misbehaviour by male passengers.

While the Corporation bosses have sorted this problem as majority is now posted at ticket counters across various KTC depots, the male-dominated Corporation faces another internal problem regarding the recruitment of women staff. Though there’s no official confirmation, credible sources said that during one of the board meetings, there was a proposal to do away with employing women staff citing several issues.

“People of such mentality are there, but we cannot get bogged down to unjust demands. Although women recruitment is not 33 percent as in other States, our recruitment drives include males and females based on merit,” said a senior officer from the KTC.

In fact, the officer said that women are not only punctual at work, but they are also multi-taskers, considering that they do the house chores before and after their office work.

“We do not discriminate. We have catered to both male and female staff, and all are given equal status and type of work according to their posts,” he said.

However, the Corporation had come across yet another set of problems wherein unmarried women were apprehensive in taking up the job of conductors as they believe it will affect their marriage prospects.

With regards to buses exclusively for women commuters, sources said the out of four routes under the scheme, three have been discontinued owing to poor response.

“Not all women commuters prefer the all-women buses that plied on four nationalised routes. They prefer other buses. We are nevertheless open to resume these services,” said an official.

The Directorate of Fire and Emergency Services is another area where there are issues regarding hiring of women.

In 2009, the then Congress government had announced country’s first women fire fighters force in Goa. The proposal mooted by the government has been in cold storage till date.

The Fire and Emergency Services had then sought permission from the Home Department to change its recruitment rules so that women can also join operational duties.

“The department has no women in operational duties. We had moved the file to change the recruitment rules to the Home Department,” Ashok Menon, former Director, Fire and Emergency services had said.

The department had also already changed the terminology from `firemen’ to ‘fire fighters’ so that women could also be recruited.

The proposal to change the hiring rules once sanctioned after vetting from law department and other related offices, has so far not materialised. The successive governments have not given any serious thought regarding this old proposal.

Likewise, the former BJP government had introduced women taxis with self defence trained drivers in 2014. To start with it was a fleet of 10 cars, however, there was no addition thereafter.

Goa Women’s Forum convenor Lorna Fernandes said, “Goa government departments and its Corporations need to take the lead in protecting the job opportunities for women and identifying new positions for them. This will send a strong signal that the government administration does not support a patriarchal mindset.”

Providing a safe work environment, maternity benefits, child care leave, setting up Sexual Harassment Prevention Committee and many other such decisions must be taken by senior level officers, Fernandes said.

Just as the Police, Army, Navy and Air Force are breaking new ground on job opportunities for women in the country, in Goa the KTCL and Directorate of Fire and Emergency Services must lead the way, she said.

“The Goa Institute of Public Administration and Rural Development (GIPARD), the training institute of the Goa government is already holding programmes in this direction. Now the Goa State Public Service Commission and General Administration Department (GAD) must prepare a road map on the same,” she said.

It would be appropriate that the issue of safe and secure job opportunities for women in Goa be discussed in the forthcoming monsoon session of the Goa Legislative Assembly, she said.

Former Goa State Commission for Women Chairperson Ezilda Sapeco said, “According to me, women are competitive enough to take up challenges. We don’t need reservation because like men, we can also get the postings based on our ability and also work efficiently. Women are now competitive, more educated and smart.”

Sapeco said that for safety purpose, women do need more buses and women cabs for late night travel with safety apparatus in these vehicles intact.

Women rights activist Sabina Martins giving her viewpoint said, “Employers have to agree with the principle of equality. There should be no compromise because right to equality is enshrined in our constitution.”

Activist Andrea Pereira said that the government should provide all-women buses on majority of the routes during peak time. “There was such attempt made by KTCL but I don’t know what is its status now. There should be strict implementation of the reserved seats for women in private and Kadamba buses. All the related helplines should be advertised at prominent places,” she said.

According to Pereira, initiatives like Pink Police should work in its real spirit. The vehicles purchased for Pink Police shouldn’t be allowed to be used for other purposes. There should be awareness amongst women about their rights against sexual predators.

According to Pereira, as of today women are not safe in employment firms/organisations. Some of them have not even constituted their Internal Complaints Committee as per the Vishakha guidelines. She said that authorities should act strict with such organisations if they fail to set up the mandatory Internal Complaints Committee and take up issues to handle matters when it occurs to ensure work environment free from sexual harassment.

“As far as offices are concerned, the Internal Complaints Committees should stop acting merely as a redressal mechanism but instead should also work proactively to educate women staff about their rights. The orientation should also be given to male staff about their conduct so that they know that someone is watching them. CCTV cameras should be compulsorily installed in the offices so that there’s fear of ‘third eye,” Pereira added.

Pereira said that even in public transport, women are seen helpless even if there is something wrong that is happened as no one wants to get involved in legal matters. Women are highly qualified in the present scenario and also take up challenging tasks, so they should not be compared to male colleagues. Women are also best at handling house chores.