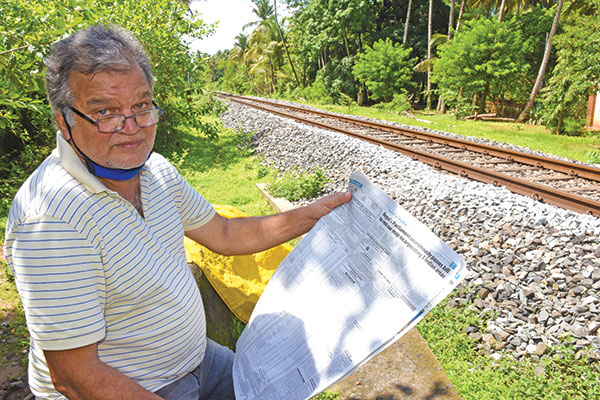 The track of South Western railway, now the battleground between the people fighting to prevent themselves being ousted from their ancestral lands and homes; and a project, which clearly aims at putting wagons laden with coal for steel plants in Karnataka, that runs from Kalem to Marga,o and then from Margao to Vasco. It is near Majorda though, where two tracks fork out, one of the Konkan railway going to Verna, whereas the South Western Railways track continues through the coastal villages of Cortalim constituency, from Arrosim to Issorcim, before culminating in Vasco via Dabolim.

During a meeting on September 19, 2017, at the South Goa Collectorate in the presence of the then South Goa MP Narenndra Sawaikar, MLA Alina Saldanha, Collector South Goa, panchayat heads, members of panchayats in Cortalim, municipal council members and importantly officials of South Western Railway, the South Western Railway; Regional Railway Manager Arun Jain said that the railways were not even considering taking the project beyond Majorda (see map of the track) because of objections from the people. He even added that without people’s consent, even the land cannot be acquired. (Source Herald Report Page 5 September 20,2017).

Almost three years later on June 19, 2020, there was a notice in Herald, which published the Notification, expressing intent to acquire land through the entire track including the section from Majorda to Vasco. On this stretch about 27,463 square metres has been sought to be acquired, affecting private land, homes and religious places.

There was something else that was peculiar. In October 2008, when the first intent of acquisition was published, the names of owners of survey numbers coming under the acquisition process, were mentioned giving a sense of identity to those affected and a chance for owners to react. For instance, the name of former Goa Chief Minister (late) Luis Proto Barboza was on that notice.

Subsequently years later, in the notice published on June 19 20202, only recently, the names of land owners haven’t been published, just the survey numbers. However, with only these survey numbers, it isn’t often possible for the relatives of the owners (since the original owners have passed on and their kin settled abroad) to respond and raise ­objections.

Alina’s nephew, a political rival for a brief period, Olencio Simoes, Secretary Goenchea Ramponkaracho Ekvott & Activist at Goa Against Coal, told Herald, “When the hearings against coal were going on, 140 panchayats objected. No one in Goa wants this double tracking. Matanhy Saldanha (his late uncle and former MLA and minister) vehemently opposed it. People don’t want it at any cost but even then, there hasn’t there been any talk of fair compensation, rehabilitation.”

“Look at the inhumanity of it all. At the time of COVID cases peaking, they issued this notice. In case people want to object, or even check the papers, they have to go to the Deputy Collectors office in Vasco, which is in a COVID zone,” he then added.

Can the Regional Manager of South West Railway, Arun Jain, come and meet the people of Cortalim constituency, look them in the eye and explain why he lied when he said, “Without the consent people’s land cannot be acquired?”

Moreover, not a single person in Cortalim has ever consented. Even gram sabhas have passed resolutions in almost every panchahyat. This notice of intent to acquire land is not just grim but a brazen way of trying to get away with lying.