Swayampurna Goem, a theme envisaging the commitment of the government for working towards achieving self-reliance and boosting the State economy, is in the first phase. With an aim to achieve 100 per cent result and a vision to make every household self-sufficient, the government is taking all the efforts to reach out to every household. SHWETA KAMAT finds out the hurdles faced by the Swayampurna Mitras and the ways to overcome the same 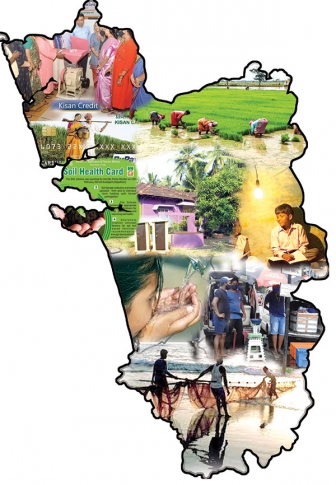 Kushavati Velip, 49-year-old widow, is thankful to Goa Government’s Swayampurna Goem initiative that helped her to get benefit under the Griha Aadhar scheme- which she was trying for over last three years, post death of her husband. Mother of two daughters, Kushavati has now applied under ‘Shelter for All’ scheme.

There are so many Kushavati’s like her, who have benefited under ‘Swayampurna Goem’ or ‘Self Reliant Goa’ campaign - the vision of new Goa envisaged by the Chief Minister Dr Pramod Sawant. In lines with Prime Minister Narendra Modi’s ‘Atmanirbhar Bharat Abhiyan’, on October 2, 2020 the CM raised a clarion call to make Goa Swayampurna.

While the campaign is in its phase I mission- which is banked on ten major goals; the lack of support from the local bodies – panchayats and municipalities - is causing major hindrance in its path of success. Several Swayampurna Mitras are facing major hurdles in implementing the campaign due to lack of knowledge or non-cooperation from the local governing bodies. However, individuals are coming forward to take the benefit.

“Lack of support from the panchayat is an issue. A newly appointed secretary claims unaware about the mission or issues pertaining to the village. Under such circumstances, it becomes difficult to go ahead. However, people are very supportive,” said Swayampurna Mitra from Ibrampur village Shrikrishna Prabhu.

Another Swayampurna Mitra from Canacona taluka too pointed out similar concern. “Unless the local panchayats give you the required support, it is not possible to achieve the success though, it is a very good initiative and is welcomed by public in large,” the Mitra said.

The non-cooperation from local bodies is despite the appeal from the Chief Minister to village panchayats to take up projects worth Rs 50 lakh and to municipal councils worth Rs 1 crore under the mission.

It is a clarion call given by the Chief Minister during the pandemic and often he has asserted that ‘we have to protect ourselves and move ahead as well’. As such, the theme itself envisages the commitment of the government for working towards achieving self-reliance and boosting the State economy.

Though, the campaign was initially launched with a focus on increasing economic activity within the State and reducing dependency on neighbouring States like Karnataka and Maharashtra, the government, decided to make every household self-sufficient, in the first phase. “Unless we provide all the facilities to the people, like water, electricity, toilets, shelter, we cannot aim to make Goa self-reliant,” Swayampurna Mitra from Latambarce Keshav Deshpande, said.

Deshpande said that people are appreciating government for this effort. “In Latambarce alone, I have provided free water tap connection to five houses, then bio-toilets and six homes which were without electricity, we made provision of solar power,” he said adding “Once we recommend to the concerned department, the applications are sanctioned and implemented within a fortnight, which is a very good thing,” he said.

In the second phase, to be launched on the occasion of 60th Goa Liberation Day - December 19- the focus will be on self employment, entrepreneurship and startups, by facilitating ease of doing business, mentorship, funding, etc.  Also, as a part of the campaign, training and skill upgradation programmes would be conducted during the entire year for people to enhance their skills and employability.

“First and foremost, making an economy self-reliant must at best refer to a medium-term horizon if not the longer term. It surely is not something that can be achieved in the short run,” a senior official from CMO said.

“The aim is to make the coastal State and its citizens independent and self-reliant in all senses. The aim of the government is to ensure that every individual in the nook and corner of Goa becomes self-reliant by harnessing the available resources within the local areas,” CMO added.

The Chief Minister has personally guided and held one-to-one interactions with the senior officers in order to make the mission successful. He has even directed his cabinet colleagues and MLAs to visit VP or municipalities in their constituencies to get them acquainted with the problems being faced by the locals and to redress them.