Lessons lost: Goans have to bear with bad roads across the State yet again

One of the most common complaints from commuters and locals is that the roads in Goa are always suffering from some kind of damage during the monsoons. Locals wonder how the government authorities fail to rectify these errors or plan in advance, to ensure that these roads are pothole free and the tar doesn’t get washed away in the rains. Last year itself, the PWD and the Minister had come under severe criticism for the extremely poor quality of roads but this year, it’s the same old story. There have been minor and major accidents including fatal ones but as Team Herald discovered, there are areas across the State where the authorities have failed to act despite being informed by locals via written complaints. Here’s a look at the issues faced by the common man 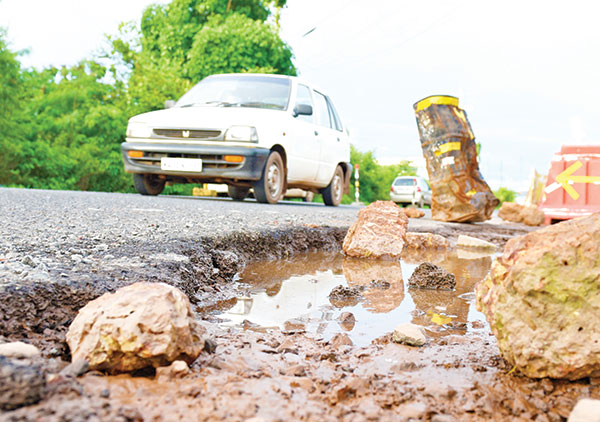 It was an annual feature these monsoons too. Some of the severely damaged roads in Panjim have been battered by the recent spells of heavy rains, causing much hardship to the commuters.

A round in Capital city and its surrounding areas gives a clear picture about the pothole-ridden conditions across. The road stretches, which were already damaged due to substandard works or the give-a-damn attitude of the authorities, have taken a severe beating in the rains.

Prominent among the most damaged roads are stretches along KTC bus stand, Patto-EDC, Mala, Miramar, Taleigao, St Cruz, and also some interiors, where patches have been filled with mud or tar, which has also washed out in the spell.

The construction of flyover, from Merces junction towards Bambolim, has led to damage of the existing road, causing much hardship.

The motorists have to endure a back-breaking ride in the majority part of the city.

“This is a common scenario every monsoons. The road condition is totally unmotorable after the rains. Before rains, no efforts are taken to clear the potholes. The motorists and other commuters are enduring untold sufferings,” Rajesh Naik, a local resident said.