For the first time in the world, Goa has developed a unique concept of Museotel. A brainchild of Curator and Founder of Goa Chitra, Victor Hugo Gomes, it is unique and at the same time it reflects true Goan culture and heritage. Kharvi Abode, which has seven rooms and a museum, is located in South Goa, in the pristine coastal village of Betul, where the River Sal drains into the Arabian Sea. It is managed by amã Stays & Trails, a distinctive branded offering by IHCL, which provides untouched and genuine escapes ranging from charming residences to mesmerizing trails in unique locations. Team Herald reports 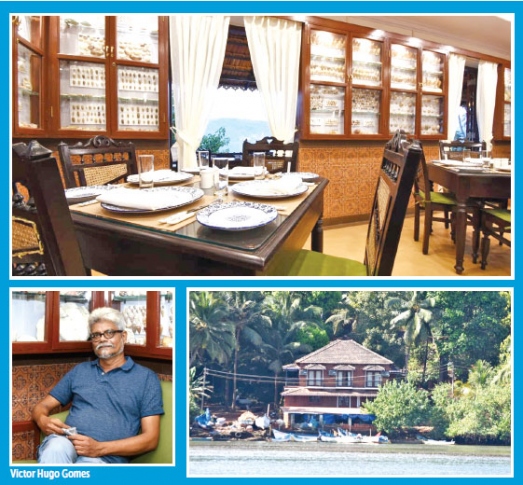 Ever dreamt of living in a museum? Well, if you did, here’s your chance. Kharvi Abode at Betul combines a hotel stay with a museum giving one a unique holiday experience.

As a child, everybody returned from the beach with a pocket full of shells. The joy of possessing those as souvenirs was unparalleled and priceless, which were then displayed in their living rooms. But what you encounter, when you enter Kharvi Abode is something different. There are 9,000 shells on display, all from across the world, but not a single one from Goa. Explaining this, Victor Hugo Gomes, Founder and Curator of “Goa Chitra” museum - who has added yet another museum to his existing three which are at Benaulim – explains that the Goa shells will have a separate display, elsewhere.

Gomes has acquired a collection of more than 5,000 shells, corals and fossils to add to his existing collection of sea shells and these are all on display at the museum at Betul dedicated to the fishing community and Goa’s rich marine biodiversity.

Kharvi Abode is more than a hotel. It is a hotel in a museum, where guests are not only pampered with luxuries and spectacular water views but are immersed in a museum, which pays homage to Goa’s extraordinary fishing community and its rich marine biodiversity. Rarely does one have an immersive experience such as the Museotel, where guests live within the fishing community whose culture is also showcased through a rich repository of artifacts all over the property.

The museum collection has specimens from almost every ocean and sea on this planet including the Pacific, the Melanesian and Polynesian islands, the Indian Ocean, the Atlantic and the Red Sea, the Mediterranean Sea and the Andaman Sea. It has shells and corals from waters of Japan, Hawaii, New Zealand and Australia as well as the Southeast Asian countries of Vietnam, Philippines, Indonesia, Thailand and Singapore. Western Indian Ocean countries such as India, Maldives, Sri Lanka, Oman and Egypt are also represented. A proportion of the collection belongs to South American waters and from the coastal waters of the United States of America, Mexico, Venezuela, Uruguay, Colombia, Peru as well as the Caribbean waters.

The Betul museum aims at sharing the shell collector’s passion for sea treasures and introducing guests to a little-known world. “We also have just seven rooms to give our guests the experience of Goan home and hospitality. The entire world came to Goa because of the warmth. We plan our guests stay including excursions. It is set up in a traditional fishing village in Betul. The concept of this museum at Betul is also set up just to protect our heritage and pride. We call this home stay as ‘Museotel’ and every activity is by water. We pick up and drop guests by boat and every excursion, which includes fishing trips is by boat,” said Gomes.

Gomes added that it is also a way to raise public awareness of beach and lagoon conservation, both in Goa and worldwide. Intensive fishing, excessive harvesting and other marine activities are destroying the natural habitats of thousands of marine mollusks that produce these gorgeous shells and because of this, now there are fewer and fewer shells on our beaches and in our seas, like for instance the Giant Clams. Incidentally, Giant Clams, Bull Mouth and species like Cassis rufa, Lambis, and a dozen other species fall in the Schedule I and IV of the Wildlife Protection Act because they have been overexploited by commercial trawlers and dredgers. Corals too are being destroyed by humans especially because of fish bombing and global warming.

“The concentration of carbon dioxide is increasing from increased car emissions, factories, forest burning etc. The oceans are absorbing a quarter of this gas, but this is now leading to a lower pH of seawater and greater acidity. Thus pumping of large volumes of carbon dioxide has caused a fundamental change in the chemistry of the ocean from the North Pole to South Pole,” said Gomes.

He further added that with this changing chemistry, organisms are now producing weaker and damaged shells; and as time progresses one will see less and less of the kinds of shells that Goa Chitra now holds.

Shells can also tell stories of the migration of people and their trading routes and some historians have even studied the slave trade, using shells.

With mass mortalities of coral reefs because of ocean acidification and heat waves, 30 per cent of the Australian Great Barrier Reef’s corals are now dead, and this makes the collection even more valuable. Fossils too have gained tremendous importance because in order to explain the current climate changes, scientists need to understand the state of the planet in prehistoric times and fossils are a way to look back into the ocean’s deep history. “We thus hope that this collection excites not only nature lovers and collectors but also historians, scientists and artists,” Gomes added.

In addition to having aesthetic value, shells and corals are also of incredible importance because of the remarkable amount of scientific data that accompanies them. With dates, location, and other information, this collection would provide the general public and scientists with an opportunity to not only view but study it as well. The shells are a comprehensive record of the biodiversity of important groups of animals, especially the mollusks, which create these complex and beautiful structures as protective homes.