NOT YET HOME, AND VERY ALONE

This may not be the biggest story of displacement in Goa, but it's certainly the oldest. Close to 40 years and counting, the evacuees of Selaulim dam are still looking for land and water. Governments and officials have come and gone, promises have been made. Now with the Revenue Minister announcing yet another survey to find land for those families who are still "missing " from rehabilitation, it was time to go back to the picturesque villages on the banks of the Selaulim river in Sanguem to see if there was hope in this announcement, or despair or just plain numbness. ALFRED FERNANDES, SUJAY GUPTA & Photojournalist Sagun Gawade did just that to spend time with the displaced 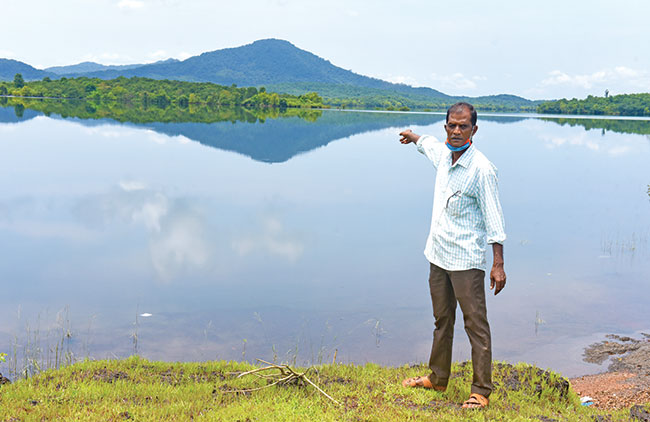 he expanse of the lagoon stretches across in a bed of beauty and quiet. There are undulating hills beyond the waters and vast hilly lands on the other side of its banks. Wisps of clouds drifted on a sky, which was oscillating between darkness and light as the monsoon played its merry dance over the Selaulim dam.

The interplay of shadows and light has been a constant in the lives of between 72 and 89 families, for whom the civilization that once existed beneath these waters, in the village of Kurdi, was home.

On the banks of the vast lagoon, which their village was, middle-aged and older men and women point to spots on the water and exclaim that was the entrance to their home.

Others, like Kustta Nilu Gaonkar, the Deputy Sarpanch of Vaddi- excitedly points to a tree and insists that his field and playground were right there. Years are retraced in a jiffy, vignettes from childhood leapt from memory breaking through the shackles of time.

The Selaulim dam submerged their village but did little to snap their heartstrings from their roots; their beloved Kurdi nestled between two hills with the river-Selaulim running through it.

Grown up men and women have their heart as well as their purse strings in the debris of trees, homes, playgrounds and shops. Their lives and livelihoods revolved in this patch of civilization they called home, in the lap the breathtaking Western Ghats.

Now, why are we bringing up their story and the story of their village from the depths of the waters? Because embedded in the many narratives of the human story of how life for 643 families will never be the same, is the particularly cruel story of 89 families.

Between 1972 and 1975, when a survey was conducted to determine the number of families or their lands, many of these families slipped out of the radar for a variety of reasons. Some simply did not know; whereas others were away from their families, working or travelling or other parts and so on.

It’s actually a measure of neglect that a survey exercise, which would change the lives of people evicted from their village, was so shoddy that 89 families were kept missing from that list.

Even as the others received 10,000 square metres of agricultural land and 400 square metres to build a home, these 89 families, who had ration and voter cards and many of them worked for the government, some ironically in the Water Resources Department (WRD), have been literally floating for close to forty years, as committees and sub-committees have been formed for their rehabilitation. With four decades and almost two generations later, there are still 72 families of the 89 who haven’t received any land.

They are still ‘missing’ in the books of rehabilitation. The others, who were suddenly found were also shortchanged and given an apology of a rehabilitation of 100 square metres.

Evicted from their homes, now submerged, ”missing“ from the list of rehabilitation, and on the list of promises and assurances of subcommittees, committees and in election speeches, these 72 families have either moved on or forced to encroach on land available, bought land privately and moved on with life, looking back at their beloved Kurdi through memories.

Two weeks, ago Revenue Minister  Jennifer Monserrate decided to go to Selaulim and relook at the issue of land not being given to the 72-odd families for 40 years. Prima facie, she offered hope after touring the project areas and the rehabilitation sites in the company of Sanguem MLA Prasad Gaonkar.

Team Herald spent an afternoon trying to locate and take a peek at the lives of those who are “missing” or those who have to make do with just 100 square metres of land. The rehabilitation colony 1 of Vadem was in a slumber.

The only signs of life were some children running around, a little boy on her cycle and stray dogs asleep or almost there. We ambled into one of the lanes, which had tiny homes with small windows and a tiny open space in front.

The family of Laxman Gaonkar was at lunch. We waited till he finished and came out. As he spoke, his young daughter stood behind the grilled window and watched us, “Ours is a life lost. We had everything. And then we realised that we were not even on the list of beneficiaries. Evicted from our land and nowhere to go, we were helpless. Don’t know how but we found our names in the list of families from the missing list who would be compensated. While others got 400 square metres for housing we got only 100 square metres. Why the difference?”

Hearing our conversation which broke the stillness of the afternoon, Krishna Chandu Jandodkar walked up from his little hutment to say the same story. He spoke of how his family members were just unlucky not to be there. “We also did not figure this is going to be so important, and that we would lose everything and not be on any list. We simply weren’t prepared”.

He echoed sentiments, which still pierce the heart of every “missing” officially, but very much present and suffering. He never goes to bed without asking himself and the world why they were given 100 square metres of land as against 400 given others, their neighbours, their friends, their village mates.

He doesn’t grudge them, because everyone is an evacuee, who has sacrificed for a supposed greater public good of constructing a dam for water, but simply asks why the bureaucracy of the free and independent government of Goa, could not fix this for 40 years.

But if you thought that this was the worst one could get, hold on. There is another category of people. They are actually in no category. They are not on any list. People on the village know them but the State and its Revenue Department don’t. Their names are not on any official record or even a missing list. We call them “Missing from missing”. Let’s meet them

The Barber of Kurdi who is

Ipo Rodrigues was the barber of Kurdi village which has submerged. He and his ancestors grew up giving haircuts to the villagers of Kurdi. When the entire village moved afire the constriction of the dam, Rodrigues also moved not quite knowing what his future would be.

He realised to his shock that his name was not in the list of beneficiaries. He then got to know that there is a missing list. Later he realised that he was not even on the missing list. He then decided to take matters into his own hands. He just found some open space, moved in and built his house.

While he can be forgiven for doing this, the government must realise that due to sheer administrative lapses, vacant lands are being encroached, which leaves the government with less land to genuinely offer land and titles to those whose are still waiting, which includes people like Ippo Rodrigues

Worked for the Water Resources Dept for 30 yrs. But still not even on the missing list of Selaulim evacuees

In the village of Bhati, on the road to Sanguem amidst fields and greenery is the home of Ramnath Naik.

The 67-year-old lives with his brother and an extended family. When Team Herald reached, he and his family members emerged and were actually amused that we came checking on them.

It’s a family which has clearly moved on, keeping memories close to their hearts. Recalling the past, he said, “My father was not educated. He didn’t even know why the survey was done. When asked, he may have said that he didn’t want any land. When we finally moved 37 years ago, we decided to buy a small plot of land and build a home and I had a government job with the Water Resources Department.”

The irony couldn’t be starker. Naik’s family was evacuated to make way for a dam, a project under the water resources department. He worked for the department. But in his close to three decades of service, his family’s name was not even in the missing list of those evacuees who should have been rehabilitated.

He almost sounds matter of fact, as he says this while standing in the little open space outside the house. All he does is point to the tiles on the roof and says softly, “See the tiles closely. Those were the tiles of our village home in Kurdi. We took them when we were forced to move 37 years ago and used them to build this new home”.

That was the only time one noticed a hint of emotion in the eyes of the 67-year-old.