No lines on these routes are busy. No point dialing after sometime

Through forests, a sanctuary and remote hilly villages of Sanguem and Quepem, Team Herald gets you stories of how difficult it is to connect to what we consider the new basics- mobile telephony and internet. DHIRAJ HARMALKAR & SUJAY GUPTA spend time in back of beyond hamlets in two South Goa talukas; meet children and elders, trek with them as they meander through forests looking for one inch of area, where they can check their messages containing school lessons, at times in pouring rain 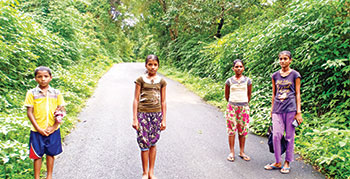 Through the deep dark woods, we walk to get ‘connected’

Dateline Netravali Wildlife Sanctuary: The woods are dark and deep. The afternoon sun breaks through the monsoon clouds but doesn’t quite manage to penetrate the dense foliage of this stretch, ie one of India’s most sensitive biodiversity hotspots- the Netravali wildlife sanctuary - in the foothills of the Western Ghats. On either side of the steep curve of the road, nature was displaying its bounty. Monkeys jumped around, a couple of peacocks braced the road deftly cavorting from one end of the forest to the other.

The silence of the forest road was broken by the laughter of a group of children, walking downhill from the hilly village of Verlem, towards Netravali. The walk is long but the kids are nimble. Seeing a car they stop and walk briskly, not quite sure what we aliens were doing in their forests. We coax them into stopping to chat with us. Two of them had mobile phones, borrowed from their elders. On asking, they said they were walking to one spot a, 3 to 4 kilometre walk from their village Verlem, to get to a point where they get a semblance of a network and if they lucky enough to be able to download a WhatsApp message containing the topic or questions they need to respond to.

In case you didn’t quite get this, it is in a remote jungle spot, where you can get to only after a long walk.

These children, two of them only in classes three and five, are attending their version of 'online classes'. They are lucky that the rain has held up. Or else there is the drama of monsoon fury added to this scene; where children between eight to 15 manage their umbrella and raincoats and still have to keep that all-important mobile phone dry; and then hope that the finally get network at a spot which gives them some hope (See box  for details)

Development does die a thousand deaths when you see little girls, walking in the dense forests through foliage and rivulets, clutching a mobile phone, for 4 kilometres to find that one spot where they get enough bandwidth to see a WhatsApp message and new lessons sent to them.  The whole idea of social distancing and not leaving home gets buried in the remoteness of Netravali (Neturlim). Such a tragedy in the lap of breathtaking beauty

When the Sarpanch gets connected once in 2 days 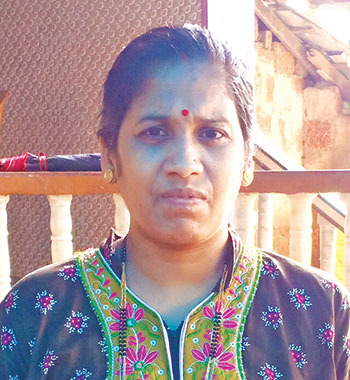 Dateline Verlem: After the chat, Team Herald went deeper towards the hilly village of Verlem, within the sanctuary. It was like entering into a time bubble of the past, early 19th century perhaps.  There is obviously no mobile network and almost zero landline network. These things are a little difficult to come by since the Forest Act governs all activity. This is where the Sarpanch of Netravali (Neturlim) Archana Gaonkar lives, the head of the elected seat of local self-government, the panchayat. So how do people get in touch with her? Only when she manages to take the only bus that sets off from Saljini village daily, which is ten kilometres south of her Verlem village, in an even more stretch of remoteness. She hops on to the bus when it reaches Verlem from Saljini, which then winds its way downhill through the forests of the sanctuary, emerges from the protected area of the sanctuary and reaches the main village cluster where the panchayat office is. It is then that the sarpanch gets “connected”, for the first time in two days.

The disconnected route includes village clusters like Tudav, Verlem, Saljini. The villages do have a telephone system, no mobile towers and often stay without electricity.

19 kms to make a phone call, 33 kms to withdraw cash. Return journey for both takes 104 km 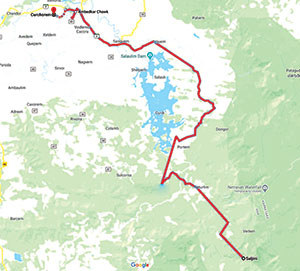 These are sums of despair. If you are from Saljini and need to withdraw cash from an ATM and get online connectivity, this is what you need to do. Get onto the only bus for the day, which leaves early morning. Timings can be erratic so you need to be informed about the departure timing.

From Saljini village, to Neturlim, it’s 19 kilometres. If there is no power, the BSNL tower at Netravali will be down or just not working. This would mean that the only ATM in the village would be out of service because of no power and no internet. You then wait for the Neturlim to Curchorem bus service, which too isn’t seamless. When you do get it, the journey to connectivity and a cash machine is 33 kilometres.  And then the journey back is also dependent on being able to get the last and only bus heading to Saljini in the evening. If all goes well, its 52 kms back home, making this a neat 104 kms trip.

So, you see, it is almost every department of governance or public service which fails them at every step.

VOICES FROM THE GROUND
3rd std student Anish Gaonkar; 9th std student Avishka Santosh Gaonkar;  7th std student Dipika Devidas Gaonkar; and 5th std student Kavita Gaonkar, are residents of Verlem-Neturlim (Herald met them right in the middle of the Netravali wildlife sanctuary) Avishka Gaonkar studies in the Maina Caurem Govt School. In pre-COVID times, she had access to a school bus. Now for “online classes”, she needs to walk through the forest These school children also informed that although many privileged students from other places tend to get direct guidance and assistance from the teachers via video conferencing whereas for the children from Verlem, video conferencing or lightning-fast speed of 4G is far from reality.
Rajendra Naik, retired govt servant from Chawdi- Neturlim Rajendra Naik a retired person from Chawdi-Neturlim says, “I have a broadband internet connection, which is used by my daughter who is in class 12 in a school in Curhorem. The internet connectivity is so pathetic that it does not remain constant for more than two minutes and this further creates problems in downloading pdf, doc and image files, which are necessary for his daughter to study. We have complained about this issue to their area engineer of BSNL but our complaints fall on deaf ears. Prajyot Velip, Neturlim Velip, a youngster from Neturlim mentioned that when he tries to surf the internet through his smartphone, he gets the 2G speed of 50 kbps or less than that speed. Further, if he wants to download or send some file of 5mb, then it takes more than five to ten minutes for it to get downloaded or uploaded. Diljeet Naik, a teacher in the Industrial Training Institute (ITI) Vasco Naik is a teacher at the ITI Vasco where he imparts knowledge related to Industrial training to his students. He is also a part of the online classes’ curriculum wherein teachers, lecturers have to give online classes and complete their syllabus. Naik said “How am I supposed to take online classes and finish the syllabus, by working from home in Neturlim?” He added that he had complained several times about this matter to the BSNL office but he only gets excuses such as there being staff shortage. During the rainy season, the cellular network connectivity shows its true colours and then I have to stay awake preparing notes for the students till 3 am”, he lamented in exasperation. Amit Naik, a local from Neturlim- Sanguem Amit Naik is a vigilant citizen and local videographer from Neturlim village, who highlights various social issues on social media platforms. He stated that the major network connection people get in this village is of BSNL.  However, he says that it is just for namesake as there is absolutely no network that is worthy for doing any activity even surfing the net’. He also added that on many occasions, due to power failure, the mobile tower also stops functioning” “Their Junior Telecom Officer (JTO) handles six towers, which are Rivona, Bhati, Uguem, Vaddem , Neturlim and Caurem-Pirla, which is from Quepem taluka.  A week ago, I visited all 5 towers from Sanguem area and the Sanguem office shutters were also down. Then I went to the Curchorem main office to inquire about our JTO but then I was redirected to Quepem office. When I met the JTO and questioned why there is a network issue in the village and why the students and people have to suffer due to poor connectivity, he did not utter a word and preferred to keep his lips sealed” Naik quipped. Naik, who contributes to local channels uploaded a video on this experience which went viral.
--
BSNL responds 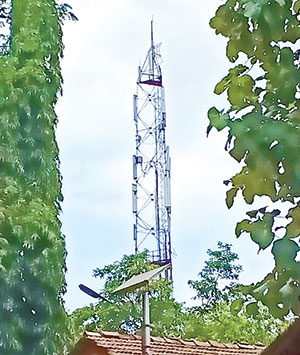