Nothing healthy about the debates in the House

Goa Legislator’s Day (January 9) this year falls a day after the election code of conduct has come into force. The celebrations, therefore may be quieter. As the term of the current Assembly comes to an end, it presents the opportunity to review what the past five years have been. VITHALDAS HEGDE interacts with former legislators and discovers how they functioned in the past, when Bills were discussed with healthy debates and then passed, something that is not happening today

January 9, 1964, was the day when the first erstwhile Goa Daman and Diu Assembly met in the Old Secretariat (Adil Shah’s Palace), Panjim. It was the day when after years of colonial rule, democratically elected member of the Legislative Assembly took oath. Decades later, former and sitting MLAs and MPs of the Goa meet every year on this day bestowing upon it the term – Legislators’ Day.

Goa has changed dramatically and drastically since that first Assembly met, and along the way, the sittings of the House have also change. Today, after almost six decades since that day, legislators, the former ones in particular, feel the need for healthy debates in the House as important Bills are rushed and passed without proper discussion, a trend getting more common in the State. Last year for instance, the government faced strong opposition after it passed the controversial Goa Bhumiputra Adhikarini Bill, 2021 without any discussion in the House. Opposition to it forced the government to keep the Bill on hold and then allowed it to lapse.

Can the legislators’ forum force a change in the sittings of the House? Former Deputy Chief Minister Ramakant Khalap, who was actively involved in drafting the constitution of the Goa Legislators’ Forum, said that most of the issues faced by the State are discussed by them.

“All sitting members and former members meet on Legislators’ Day every year and it gives all of us an opportunity to interact, exchange thoughts and take issues forward. In the past, former MLAs have given their valuable suggestions during the Official Language Bill and the Goa Change of Name and Surname Bill, which were later passed by the Goa Assembly and became an Act,” Khalap said.

He gave the example of how the Goa Assembly passed the Goa Bhumiputra Adhikarini Bill, which faced strong opposition by the people forcing the government to keep it on hold, to underscore his point.

When asked whether the level of debates has declined in the Goa Assembly, Khalap said there have to be healthy debates in the Assembly and admitted that it is hardly seen, “Opposition has to be strong. When I was Leader of the Opposition, I had constituted Shadow Cabinet and had given various departments to my MLAs, who used to prepare their subjects well and raise matters in the House. We don’t see it nowadays,” he said.

Khalap suggested better coordination between the legislators and their parties. “There has to be regular interaction between the MLAs and their political party so that the issues concerning the State can be discussed threadbare,” the former Dy CM said.

According to Goa Legislators’ Forum vice president and ex-MLA Victor Gonsalves, the forum is now active and is conducting various activities and programmes both for legislators and people. “On Legislators Day, all sitting and former MLAs and MPs meet and celebrate the day. It is an occasion for all of us to come together, interact and exchange ideas. This year we will felicitate four former MLAs for their contribution to the State.”

The forum has discussed issues of concern in the State. “We are concerned about issues concerning Goa and discuss them in the open forum. We had discussed diversion of waters of Mhadei river by Karnataka and also visited Kankumbhi in Karnataka where the Karnataka government was illegally undertaking work to divert water from Mhadei basin to Malaprabha basin. We then wrote to the Goa government expressing our concern over Karnataka’s evil designs and the Goa government wrote to Karnataka government expressing our apprehensions and asking them to stop diversion of Mhadei water,” Gonsalves said.

According to Gonsalves, unemployment is another issue which was discussed in the open forum on Legislators Day. He said that he had suggested a review of the existing domicile clause to change it from 15 years to 25 years for the benefit of original Goans living in Goa since Liberation.

“Domicile clause came into force in 1978 and I noticed that those who had settled in Goa are applying for government jobs. I wanted the government to review it and increase the domicile limit to 25 years so that original Goans living in Goa since liberation are given preference in government jobs,” he said.

Gonsalves said that the then Chief Minister Manohar Parrikar has suggested formation of committees on important subjects so that former members can also give their valuable suggestions which can be accepted by the government and in turn contribute to the welfare of the State.

The Forum came to be set up when the MLAs and MPs, irrespective of their party affiliations, came together with a view to interact and exchange views between them and the government and to suggest plans relating to the economic and social development of the State and for the pursuit of ideals of Parliamentary democracy.

Goa Legislators Forum treasurer and former MLA Sadanand Malik said that the Forum has been conducting various seminars and inviting eminent lawyers as guest speakers. It provides a platform for sitting and former MLAs to interact and share their thoughts. For example, The Goa Succession, Special Notaries and Inventory Proceedings Bill, which was passed by the Goa Legislative Assembly replacing the Portuguese Civil Code was discussed by the Forum, for concrete suggestions.

“We had also discussed the Goa Change of Name and Surname Act, which was passed in 1990 and which the cabinet has now decided to bring an Ordinance to make it stringent for those individuals trying change their name and surname with indigenous names of citizens of Goa. The government has now decided to amend the Bill to allow those whose parents or grandparents are born in Goa to change their name and surname.

“In fact this particular Bill had been piloted by former Minister late Dr Kashinath Jalmi and we wanted it to be enacted on the lines of the Goa, Daman and Diu (Citizenship) Order, 1962, wherein it is applicable to those whose parents or grandparents were born before the Goa’s liberation.”

Malik said that the forum had also discussed the demand to grant Special Status category for Goa though it did not materialise. 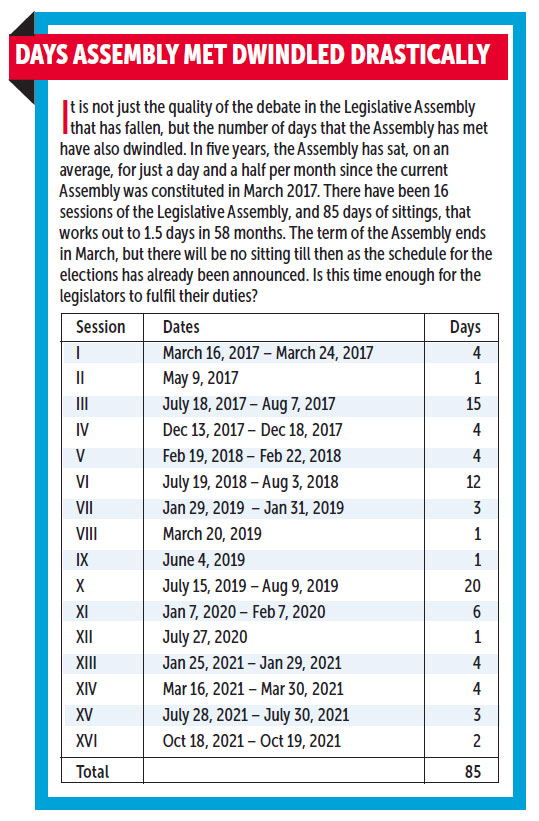 Malik lamented that nowadays Bills are introduced, considered and passed on the same day. “The job of a legislator is to legislate good laws but today it is forgotten and Bills are passed without any discussion. Bills can be passed in emergency cases and not otherwise,” he told Herald.

“During our time, Bills were given to us two days prior to its introduction in the House so that we could study and prepare for it. It is not happening now and I think that both – the ruling and the opposition – are to be blamed for it,” he said adding, “I feel that there has to be good debate in the House.”

Goa Legislators’ Forum secretary and ex-MLA Mohan Amshekar said that the Forum has been conducting seminars and various programmes such as inter-collegiate legislature competitions for college students.

Amshekar is also of the opinion that there should be a strong opposition and healthy debates in the Legislative Assembly. The opposition cannot be for the sake of opposition and it has to be constructive opposition so that the government can consider their valuable suggestions. Then only democracy will function.

Amshekar said that today every MLA wants to be on the ruling side and this is happening because the government is not undertaking various works in constituencies represented by the opposition. This has to stop if we are really interested in the development and welfare of our State.