Only DUST and QUEUEs everywhere…

On January 30, 2020, the Supreme Court allowed mining firms to transport iron ore that was validly mined from mines in Goa, on the condition that, they had paid royalty to the government authorities. This has given a push to the economy in the mining belt, which had come to standstill after the Supreme Court order. However, in a bid to finish transportation within six months as per the Apex court directive, deadline of which ends on June 30, the mining companies and transporters seem to be violating the law and DMG regulations. The unchecked violations, as such, have been threatening the lives and health of the locals, mostly at Sanvordem-Curchorem who have opposed the movement of trucks but their pleas have fallen on deaf ears. SURAJ NANDREKAR and lensman SAGUN GAWADE report… 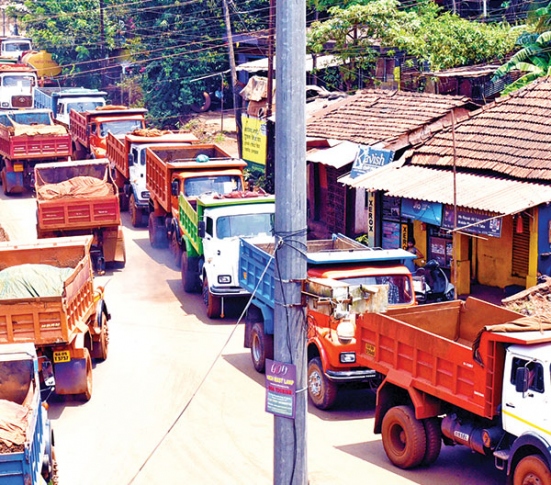 For the last 40 days, Goa may have been in the Green Zone but the villages of Curchorem and Sanvordem were already in the Red, not because of deadly COVID-19, but the unregulated transportation of ore, which has its own harmful consequences.

The Supreme Court in January, this year had permitted 9.5 million tonne ore lying at jetties and plots, which has to be transported within six months.

The South Collector has also issued a Standard Operating Procedure (SOP) according to which only 25 to 30 trucks could ply per hour from the mines.

However, the reality seems to be something different.

Locals told Herald that the unregulated transportation choke the road in the morning (up to 1 pm) and causes heavy dust pollution besides the accidents, which has rendered the roads unusable for locals.

Locals also lament that there is allegedly no monitoring from the Government department i.e Directorate of Mines and Geology (DMG).

“Earlier, the DMG and Mega Soft System and Goa Electronics used to monitor the transportation from loading and unloading points but nothing is done now,” the locals alleged, who fear that the  people there will die of pollution and breathing problems before COVID-19 strikes.

Locals questioned how the 450 trucks have been able to get 900 drivers during this strict lockdown.

“Most of the drivers are migrants and we don’t know how the companies managed to get them into the State during the strict lockdown, which is in place since March,” stated locals.

“These are not trucks, they are ‘yamrajs’ moving on the prowl (yamraj - In Hindu mythology, is referred to as the god of death), he said, while adding that locals, irrespective of the lockdown are forced to stay indoors due to this truckers menace.

... But some locals are happy as economy benefits

While there are people criticising the movement and traffic issues besides pollution, there are some who say the resumption has brought good news to them.

A local Vallabh Desai says for the last two years the businesses here were completely down. “With the start of truck movement there is business for the puncture shops, tea stalls, petrol, diesel etc. All in all the economy has started to move,” said Dessai.

Another local Ganesh Pagui says there will always be people who will want to criticise. “When mining was not starting they were upset, when it started they are upset, you cannot do anything about it”, Paugui says.

He further says that for the SSC exams, the transportation of trucks would be stopped from May 21.

“Besides, there would be no transportation in the monsoon, so people need to understand all these issues,” he says.

The South Goa Truck Owners Association Secretary Cajetan Fernandes says the truck owners have been following the rules and regulations and that there are no violations of the SOP of South Goa Collector.

“The major issue is that the Kapshem Jetty is the ending point and hence all truck reach here at one point and that is why it shows hundreds of trucks in one hour,” he told Herald.

He says there are several mines and only one ending point.

Fernandes says that the issue would be sorted once the mining bypass is ready.

“However, due to mining closure the work on mining corridor has been abandoned,” he says.

The way transportation is done is unsafe: Cops

Curchorem Police Inspector (PI) Ravindra Dessai has admitted that the unregulated transportation of ore could lead to law and order problems and in that regard, has asked the District Administration to intervene in the matter.

Dessai has also made a written request to the administration to issue necessary orders.

PI Dessai has also pointed out that the residents have been continuously complaining about the hardships they have been facing, due to the long queue of trucks at various places that are transporting ore.

“It is noticed that handling the huge consignment has led to the frustration of road users due to the dust pollution and accidents in the area. While issuing the order granting permission to the establishments to carry out the transportation, the competent authority had imposed certain conditions with strict implementation of the directives of the High Court. But it seems that the directions have remained mere records in the file and the transportation of mining ore is being carried out in an unsafe manner, with scant respect to the rights of the road users,” PI Dessai writes.

Dessai, in the memorandum, further expressed the possibility of breach of peace and tranquillity in the locality which can cause a major law and order situation.

Not only this, the PI has also recently organised a meeting of the representatives of mining companies to discuss the issue.

Mining corridor is basically a bypass, through which mining trucks would pass, avoiding mining dust, due to the movement of trucks transporting ore through the villages in the Curchorem, Sanguem belt.

Former Chief Minister (late) Manohar Parrikar had also laid the foundation for the road and demarcation was also done. However, when mining stopped in 2012, the road was also abandoned.

Villagers from Sanguem and Quepem talukas have warned of protests against iron ore transportation if the corridors are not built.

Several villagers from Quepem, Sanguem and Curchorem have been demanding that the mining bypass be completed on a war-footing, without which they warn that they will not allow any ore to be transported in those areas.

In 2011, the erstwhile Digambar Kamat-led government had proposed mining corridors in three different phases – Uguem to Guddemol, Guddemol to Curchorem and Pirla to Uguem. However, even nine years later, the corridors are yet to see the light of day.

The State government has been dragging its feet over the crucial mining bypass, which needs to be completed in three phases. Due to this, trucks are forced to take the main road resulting in several fatal accidents,” said Pradeep Kakodkar, a leader of ‘Mission Bypass’ group.

Kakodkar, along with other villagers, had begun an agitation stopping iron ore transportation in March this year, following a fatal accident that killed two women. The people have stopped transportation since then.

Kakodkar added that around 6,000 trucks are operational in the Sanguem, Quepem and Curchorem belt; but the agitation has affected only a few truck trips, and not the entire transportation activity. “The truckers drive in a rash and in negligent manner. With narrow village roads and trucks being parked on the either side of the road, it becomes difficult for the normal commuters to travel,” said local resident Vaishali Vaigankar, while adding, “Though the government has fixed the speed limit, no trucks follow it.”

“Iron ore mining transportation has killed nearly 70 to 80 people till now in this belt,” said another villager Vikas Desai, while adding that ore is not a perishable commodity and mining firms can wait for the completion of bypass to export the ore.

The issue was recently raised in the Assembly and Chief Minister Pramod Sawant had assured that the construction of the mining corridors would be undertaken either by the mining firms or utilising funds collected under the District Mineral Foundation (DMF).

What the Court had said

In a major relief to mining firms, the apex court modified its earlier order and permitted transportation of already mined iron ore lying unused at various sites in the State.

The apex court had earlier banned mining and transportation of iron ore in Goa.

The bench directed the mining firm to transport the iron ore within a period of six months from the day of the order, provided it has paid royalty to authorities and has a valid license with regard to it.

The Supreme Court of India, in February 2018 had quashed the second renewal of iron ore mining leases given to as many as 88 companies in Goa in 2015 and had directed the Centre and the Goa government to grant fresh environmental clearances to them.

The court had, however, said that mining lease holders, who have been granted a second renewal in violation of its previous decision and directions, are granted time to manage their affairs and may continue mining operations till March 15, 2018.

“However, they are directed to stop all mining operations with effect from March 16, 2018 until fresh mining leases (not fresh renewals or other renewals) are granted and fresh environmental clearances are granted,” the bench had said.

The judgement had then come on a petition filed by the NGO, which had also raised the issue of companies carrying out mining in violation of various statutes.