Only get a water tanker that visits our village twice a week: Sanvordem locals 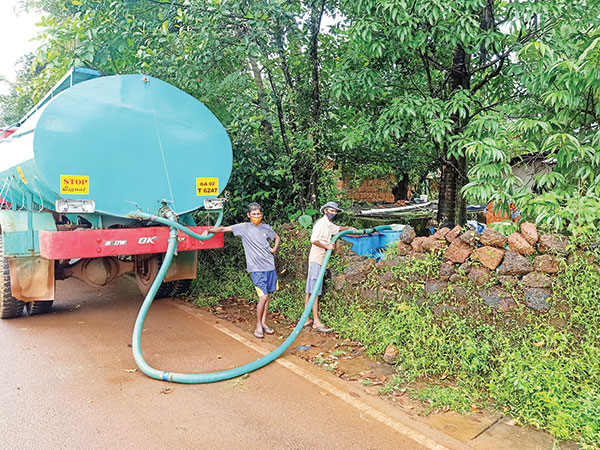 Despite the many assurances given by the authorities, water scarcity is still a big problem in Sanvordem. For the resident of villages like Ambeudok, Periudok, Dukarkon, Gudemol, Kudeghal, it’s an all year-struggle and it’s a common sight to see people, including children line up with plastic pots waiting for water supply. Some others leave drums outside their house for the water tankers.

A local named Gopinath Naik explains that while people are dependent on natural resources such as wells and borewells, there are many who are forced to travel long distances, literally from one village to another as the available water supply is not sufficient for them.

Another local named Gaurisha Naik added that they have to keep all their work aside when they wait for the water tanker, which makes an appearance twice a week. She added that the drums stored at their houses can last for three days while the situation is tough for people who stay on rent, who get only one drum and some buckets of water.

Another village named Martha Fernandes, said that the situation is so bad that during festivals or wedding ceremonies, people tell their elected representatives in advance for water to be arranged via private tankers or to be provided with extra drums.

What frustrates them is that a JICA water pipeline had been placed eight years back but there is no water connection to the villagers, who add that there is no urgency from the authorities either.

The Assistant Engineer on the JICA project, Sanay Gawade said that work on providing connections began last year but due to the pandemic there has been a delay. He assured that the work will be completed by January 2021.

Local MLA, who incidentally is the PWD Minister, Deepak Pauskar also added that people would get regular water supply at the earliest as the issues regarding pipelines and connections are being sorted out soon.