Only on paper, yet to find ground: The curious case of IIT in Goa

It was in the year 2015 that the Union Human Resources Development (HRD) Ministry had allotted a new Indian Institute of Technology (IIT) to Goa. Since that time, the Centre and the State via former Chief Minister (late Manohar Parrikar), Laxmikant Parsekar and the incumbent Chief Minister Pramod Sawant, have only been discussing proposals about where the IIT campus can come up. While IIT is presently housed in the campus of Goa Engineering College (GEC) at Farmagudi, Ponda; there has been strong opposition to other two sites that had been identified by the government, Loliem-Polem village in Canacona and Shel-Melauli village in Sattari, by the locals who launched major protest campaigns to protect their lands. SHEWTA KAMAT tracks the saga of the State government’s efforts to locate a suitable place for this project that has also seen many people demanding that Goa should not miss out on having one of the country’s most acclaimed educational institutes.

The Indian Institutes of Technology (IIT) may be at the top of India’s educational hierarchy; but in Goa, over the last five years, multiple protests, held by the villagers- South as well as in North- where the IIT Goa campus was planned to come up at- has shattered the State Government’s plan to construct a dedicated premise for the institute, which is temporarily functioning from Goa Engineering College (GEC) Campus located at Farmagudi.

Ever since IIT was allotted to Goa by the Central government in 2015, the successive BJP-led State government is finding it tough to sync its decision with the views of the villagers- the biggest hindrance. Despite making two attempts (rather three), the  project failed to take shape owing to the mounting opposition from the residents of the Loliem-Polem villages in Canacona and the latest by the Shel-Melauli locals of Sattari taluka- the two sites that had been identified by the government respectively.

With the latest development- scrapping of the IIT project at Guleli-Shel-Melauli- the Government has to now once again scout for an alternate land for the campus. 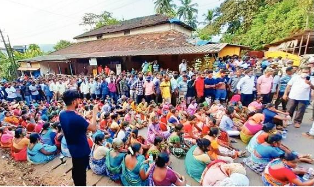 Over the last two months, multiple meetings, protests have been held by over thousands of residents of Shel-Melauli- where around 10 lakh sq mtrs of land was handed over to IIT by the government. The protest started gaining momentum- with neighbouring villages like Pali, Hivrem, Mauxi, Dhamshe and Khotodem coming out in support of Shel-Melauli villagers.

The ‘unity of people’ compelled their local MLA and Cabinet Minister Vishwajit Rane- the brainchild behind the idea of shifting the IIT project from Sanguem (the site identified by the then (late) Manohar Parrikar led government) to Sattari- to bow down to demands of his voters and with “folded hands” request the Chief Minister Pramod Sawant to scrap the project in his constituency.

Respecting the people’s sentiments, the Chief Minister on January 15 announced to shift the project out of Sattari. 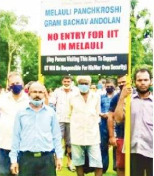 The Narendra Modi led government, in a cabinet decision in December 2015, granted approval for setting up of six new IITs in the States of Goa, Andhra Pradesh, Chhattisgarh, Jammu and Kashmir, Kerala and Karnataka. The total cost for running these IITs was Rs 1,411.80 crore and would have been incurred between 2015-16 and 2018-19.

However, while the first batch of engineers graduated in 2019-20, with the commencement of the academic year in 2016, the Government has failed to get a permanent campus for the Country’s one of the highest institutes.

The saga of the Goa government’s search for land to house the permanent campus dates back to 2015-16, when a site in Dhargal-Pernem was first selected by the then Chief Minister Laxmikant Parsekar.

Being an education Minister and a principal by profession, Parsekar preferred to have the topmost institute in his own constituency. However, since some of the land portion belonged to the private individuals- who were not keen to allot the land, the Union Ministry for Education rejected the site proposal.

The State government then chose a new site at Loliem in Canacona that got a nod from the Union Ministry. Unfortunately, opposition by the local residents, citing ecological concern- forced the government to drop the site in 2017. 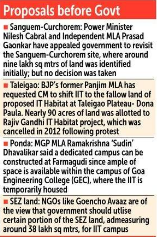 Then, a third site was selected in Cotali-Sanguem in 2017-18. But here in Sanguem, the land was never handed over to IIT, even as there was no opposition from any corner. The idea behind not going ahead with Sanguem site is a mystery.

Finally, in August 2019, a new site was chosen in Guleli- Shel-Melauli in Sattari. In May 2020, a land admeasuring 10 lakh sq mtrs was handed over to IIT Goa. However, the uncertainty looms over the site, too, with mounting opposition from the villagers.

The Ministry of Human Resources Development (MHRD) - now called as Union Ministry for Education- rejected Goa government’s proposal to locate the full-fledged IIT at Dhargal, Pernem on the ground that the land was ‘insufficient’. The MHRD requirement was for 400 acres of land.

The MHRD asked the government to either look out for additional property within 5 km radius from the proposed site at Dhargal, or locate another land that meets the requirement.

The site identified, also had ownership of some private individuals, which MHRD, did not approve of.

Nearly 5000 villagers gathered at the Bhagwati Moll plateau in September, 2016, opposing the government's idea to construct IIT Campus at the site- which MHRD had even granted its nod for it. Nearly 318 acres of land was identified and earmarked for the institute. The villagers said that the plateau is “ecologically critical’ and their generations of men and animals have hunted, grazed at the site. Further, the plateau feeds four streams that flow to the nearby Loliem river, spawning a lush ecology of arecanut and coconut plantations- the livelihood of several families.

The plateau also houses a temple of ‘Betal God’, where annual festivities are held every alternate year.

More so, the Bhagwati Moll plateau has a government reserve forest on one side, which, in turn, adjoins the Cotigao wildlife sanctuary. On three sides of the plateau lie 14 populated wards of the village.

The villagers had a massive signature campaign- signed by over 10,000 people from Loliem-Polem and nearby villages-against the project. Numerous representations were made to the Government authorities warning that the villagers won’t let a single stone be de demarcated for the project.

As the government failed to convince the villagers, the then Chief Minister, Parrikar, soon after resuming charge in 2017- decided to call off the plan. In June 2017, Parrikar announced the government’s plans to scrap the project at Canacona.

In 2017-18, the Sanguem Independent MLA Prasad Gaonkar had identified around 10 lakh sq mtrs of government owned land in Cortali village in his constituency. The proposal, backed by Curchorem MLA Nilesh Cabral- was welcomed by then CM Parrikar.

Parrikar’s sudden illness in February 2018- left the proposal in cold storage. With deteriorating health condition- Parrikar- suffering from pancreatic ailment- failed to take any call with respect to the site.

With Pramod Sawant at the helm of affairs, his cabinet in August 2019 decided to shift the IIT project from Sanguem to Guleli-Shel-Melauli in Sattari.

With Shel-Melauli villagers opposing the project- Sangeum MLA once again requested the government to shift back the project to his constituency. However, the Government was in no mood.

This in fact led to a political war erupting between the Chief Minister and the MLA; wherein the former accused the legislator of being involved in “land deals” to push for the IIT project. CM also accused MLA of failing to hand over the land to the government.

The allegation led to the BJP-led coalition government losing the support of one Independent MLA.

The protests by residents over the Melauli site had started in February 2020; however, it got momentum from August- months after government handed the documents of transfer of land (admeasuring 10 lakh square meters) in Melauli, Sattari, to the Director of IIT Goa, Prof BK Mishra.

In August 2020, the residents of Melauli organized a particularly unique protest, tying rakhis to the trees that the government had marked for felling for the proposed IIT Goa project.

Reasons for opposing the project are that the site is a forest area. Located at the foothills of the Western Ghats, the land is covered with cashew trees that the villagers claim have sustained them for generations.

Villagers claimed that the cashew trees have sustained them for generations. They are demanding that the proposed IIT campus is shifted to a different location, where the ecological impact will be less severe. The site also houses an ancestral temple.

The plot on which the IIT permanent campus is slated to come up is a revenue land and belongs to the state government. However, the crisis has deepened because the villagers don’t have the required documentation to prove that they have rights over the land.

As per census records, around 81.38 hectares of the 1,629.14 ha of land in Melauli is a forested area and is also located to the close proximite of the Bondla, Mhadei and Mahavir WLS

The Union Ministry for Environment, Forest and Climate Change in February 2020, declared the area as an ecologically sensitive zone.

The ongoing day and night protest took a violent turn on January 6 with the protesters hurling stones and the police responding with lathi charge. The protestors blocked the village entrance, ensuring that the officials did not enter the site to undertake demarcation of the proposed campus site.

Over hundreds of villagers- for three days- had major scuffle with police- where members from both sides- were equally injured. The villagers- continued their 24x7 protest- despite FIRs being filed against some of them and use of police force.

Intensifying the protest against IIT- the support has begun pouring in for Shel-Melauli villagers from the localities nearby- with more than 5,000 residents of Pali, Hivrem, Mauxi, Dhamshe and Khotodem- taking on streets extending support.

A move to pacify agitating villagers

In August 2020, the Cabinet, marked and diverted a land parcel of 45,000 square metres, of the proposed 10 lakh square metres for religious activity.