Pandemic shoots school sports out of the playing field

With major sporting events getting suspended or delayed due to the COVID pandemic, along with unexpected changes on the horizon, sporting activities have been significantly affected in the State especially in colleges and schools. Many of these educational institutes had big hopes and plans for the year that has gone by. For young sportsperson and athletes in particular, these years are considered to be vital as it is not only offers them a solid foundation for their respective careers, it also provides them with merit marks, which is quite important to them as well. ALLAN D’CRUZ reports 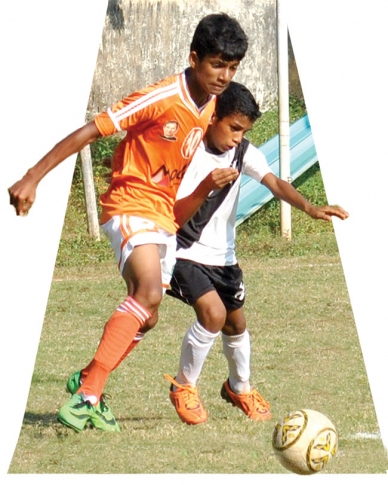 fter winning two consecutive Inter-University Kabaddi Championships, former student and Physical Education & Sports Director of the MES College of Arts and Commerce, Savio Fernandes, was eyeing his third consecutive title ever since his return to the college as a faculty member, to mark a distinct achievement.

Never had the institution achieved this feat. But then, the unexpected happened. Coronavirus arrived and stayed longer than anyone could expect. The pandemic impacted the society at large across the world, sending shockwaves leading to health emergencies. COVID-19 upended all areas in life and sport was no exception. Many sporting bodies suspended their competitions including the educational institutions.

With the cancellations and delays of major events and with unexpected changes on the horizon, the sporting activities were significantly affected. Savio’s pursuit to achieve MES College’s third consecutive title, after joining the college as PE Director in 2018, remained incomplete as his team had won the championship in the 2018-19, 2019-20 seasons.

“Since this was the last year of most of our players, we were sure of winning the crown as the team had grown stronger over the years. But the third consecutive crown remained a dream as this particular side would graduate from college this year,” added Savio, who used to be a professional footballer and knows what a sporting event meant to an athlete.

Savio also represented the country in futsal and is still an active futsal player.

It’s not just a year without sports, but a year lost in sport

Rosary College of Commerce and Arts, Navelim (RCCA) were also on a trot --winning three consecutive Goa University (GU) football championships for men --and had their eye on  fourth title. But again, pandemic had other plans.

RCCA Team Manger Remy Colaco, who has been with the college sports team for over a decade, knows how important the university championships mean for the college team as they had worked tirelessly throughout the year.

“Our college has one of the best football teams in the State which featured many prominent professional players such as Liston, Clencio, Aaren etc. But just like football we work hard in other disciplines too and our college is always contending for the overall championship as our Physical Education and Sports Director Francis Lobo takes a keen interest in sports. The pandemic has affected the sporting activities badly, stopping it completely which has affected the players psychologically and dented their chances of progress too,” Remy lamented.

If you are only an athlete or an aspiring sports student, you would be feeling the pain with no sporting activities during the entire 2020-21 academic year. A student’s life in an institution is limited and lasts for a brief period. And hence, every year counts for these students and in the long run is very important, as their development and success at this level, paves the way for their future.

MES College Kabaddi team skipper Vishal Rathod, a final year student, is one such example among the many players who missed out on National experience.  “I was waiting to represent Goa University in my final year and I was sure to make the cut. I’m totally disappointed with the situation. We just get three years out of which one year is lost due to the pandemic. I am aware health is important but I am expressing how I lost a year and an opportunity due to the pandemic,” Rathod added.

"The Reliance football tournament was a stepping stone for many footballers as there were many players picked from this event. This year, all these deserving players lost an opportunity due to COVID," stated Savio.

Just like education, sports are given equal importance at GU. The interest and participation of the major colleges at various competitions is a testament to this. Whilst the education department has been up with different measures in resolving the problems of delivering lectures and classes through online mode, sports have suffered significantly.

GU hosted 39 inter-college events for men and women during the 2019-20 academic year, with cricket remaining incomplete as the pandemic cut short the event. However, for the 2020-21 season, there was blank slate on the sports achievement’s list as none of the competitions could be organised.

The decision to not conduct any games was taken to safeguard the health of athletes and others involved and as such most events were cancelled or postponed.  “Goa University sports championships involve all colleges in Goa. Organising official inter-collegiate championships during the current pandemic could put our young sportsperson at risk. In terms of health it is better to be cautious than to regret,” explained Milton Fernandes, Assistant Director Physical Education & Sports, Head Sports Section, GU.

“We couldn’t host any games online. Chess could be hosted online but then we thought of giving equal opportunities to all as many students were facing connectivity issues and we couldn’t deprive some of the students,” Milton added.

The situation is the same at school level. The Director of Sports and Youth Affairs (DYSA) has called off all sports activities for the academic year 2020-21.

Perpetual Succour Convent High School used to participate in more than 13 disciplines in both girls and boys category but this year the students have been getting their regular classes but what’s frustrating them is the absence of sports activities.

“Children express themselves through sports and now since they have been kept indoors, it has affected them psychologically. There is absolutely no interaction among the students due to the pandemic,” expressed Perpetual Succour Convent HS PE Teacher Jonathan Faleiro.

It is also important for sports students to stay apprised of the situation.

While there has been talk about the health and psychological impact on the students, what the students will miss out the most will be on the sports merit marks in the current academic year.

At the school and college level, every student was entitled to sports merit marks upon participation in any sporting event organised by the concerned bodies. But with no competitions, no students would be entitled for the marks.

“Our students, especially the ninth and tenth standard, have lost a lot during this year especially on the sports marks since all sports have been suspended by the DYSA,” Jonathan pointed out.

The sports merit marks had boosted the students’ participation in sports in various disciplines and competitions over the years.

Just like any other teaching faculty, the PE directors and teachers have been using the online mode for exchange of information with the students.

“We as physical Education teachers are working hard to keep the students fit by sending offline videos, which help students actively participate in drills and sports, thus ensuring they are fit. We ask the student to record and send the videos of them exercising or doing the drills,” concluded Jonathan, who was also a Dempo SC youth player.

The similar programmes were practiced at various institutions and colleges.

While many colleges/schools conducted seminars on sports and organised competition related to sports, Aniket Kerkar started his own initiative at Ganpat Parsekar College of Education, Harmal of health card. The staff and students’ health status is maintained on a quarterly basis, thus keeping a check on them.

Goa Chess Association was the only active sporting body throughout the period hosting various online tournaments, as the technology favoured the sport.

The competition will give relief to youngsters who are associated with the beautiful game. It is also learnt that the Vedanta Women’s League is also likely to be held in coming months.

While the associations have kicked started, the school/colleges are unlikely to host any games this year.

While the prospect of organising sporting activities again is exciting, it’s impossible to predict when that might be -- or what things will look like when it finally happens in the State.