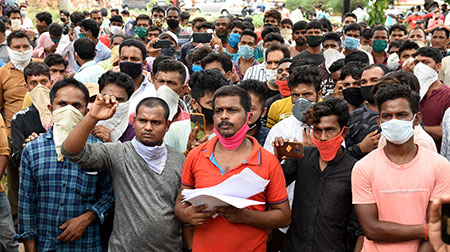 Every nation state by supposition tends towards the imperial, that is the point, through laws, armies, secret police, propaganda, courts and jails, treaties, treasuries, taxes, laws and orders, myths of civil obedience and virtue of civic laws at the top …., ’Daniel Berrigan wrote in his book - The nightmare of God.

His observation mirrors in the present day actions of our   governments – both union as well as state and their machinery as they traipse and fumble through the nightmarish migrant workers’ crisis brought about by their lack of foresight, inadequacy and inefficiency in arrangements and inept handling.

In these trying times we clearly saw two contrasting faces of our nation – one of privileged haves and other of disadvantaged have-nots. The elite class that rubs shoulders with the political class is well ensconced in their homes, insulated from the harsh realities outside -  watching  popular serials, playing video games, practicing yoga, growing beards, throwing absurd challenges, preparing new dishes and exchanging notes.

All those children of the rich and the powerful stranded in Kota Rajasthan, where they were taking expensive tuitions to crack IIT entrance test were taken to their respective home state in buses , with all due care, at States’ expenses. Similarly overseas Indians were flown in from abroad and were given warm welcome and media coverage as if they were returning from battle front after winning a war.

On the flip side battle-scarred    homebound flock of migrant workers trudging hundreds of kilometre, hungry and thirsty with little or no cash on them, are not so fortunate. Their harrowing and alarming conditions wouldn’t find place in Prime Minister Narendra Modi’s carefully crafted ornamental ‘Manki Baat’ episodes. We proudly mention the tenets ‘guest is God’ or ‘the whole world is a family’ from our rich Indian culture. But as the weak, worn out workers are  footslogging to their faraway destinations there is no sign of  ‘Babas’, ‘Sadgurus’, ‘Yogis’, their followers, scholars, intellectuals , socialites, the rich and not even conscientious middle class by the roadsides eager to put the tenets into practice.  The nation’s Home Minister is missing and the police that should have protected the workers, helped them alleviate their misery, instead intimidated and brutalized them.

The ‘Bharat Mata ki Jai’ brigade of every hue that is normally so concerned about the lives of cows is not around to save the lives of their own species. The times have belied the fact that we are a Republic, otherwise how can a fellow Indian can be described as a ‘migrant’ in his own country? The boundaries between the states have transformed into international borders.

The governments that boasted of warehouses brimming with food grains failed to provide the hungry travelers with food. The least that could have been done was, to have offered them loaves of bread and plain water to fill their stomachs. It is commendable that our finance minister feels concerned and has plans for their future employment through MGNREGA, but she should know that to avail that they first have to make it to their destinations, alive. Modi from his side too has announced a package of Rs 1000 crore for the workers, yet there is no food in sight even a week after the grand announcement.

The central and State governments instead of making arrangements to feed them were busy effecting changes in labor laws that would increase their working hours, reduce their social security, make easier their terminations from jobs and debilitate the trade unions that have been fighting to safeguard their rights.

For  the edifice of  constitution to remain plumb upright, its four pillars namely the legislature, the executive, the judiciary and the media need to remain independent and apart from one another. But in recent times the pillars of the judiciary and the media have been tilting noticeably towards the legislature and the executive. Democracy is wobbling.

At such times, when the  executive neglects its duty towards the downtrodden and the legislature is busy taking away their existing rights, the judiciary needs to step in to secure their rights to life and rights to personal liberty and dignity, that the article 21 of the constitution bestows upon them. These rights are at the heart of the Constitution, are the most organic, progressive provisions and are its very base.

The Apex court has postponed the hearings in cases related to rights of the workers, including those related to MGNREGA, pointing out it is busy with other matters. Ironically,  when the ruling party’s favorite  propagandist TV anchor faces arrests in some cases filed against him, the apex court rushes to take up the matter in 15 hours to uphold his journalistic freedom of speech guaranteed under Article 19 of the constitution and offers him protection from arrests.

The Judiciary these days seems to believe that whatever laws the legislature is enacting and the decisions the executive has been taking are bona fide with only welfare of the masses uppermost in their minds.

When the Chief Justice of India opines that there are no special privileges for the lower strata during the time of pandemic than those they enjoy under the constitution in normal times or questions distribution of cash to the workers when they are provided with two meals a day, it shows that he is concurring with the Government views.

Recently, Deepak Gupta, Supreme Court Judge, in his farewell  speech hit the nail on the head, when he said, “ This court has duty to ensure that every citizen of this country lives a life of dignity and is not deprived of the ‘right to life’ guaranteed to him under the Constitution. In times of crisis such as the ones we are living in, the court must protect the poor and the under privileged because it is they who are hit the hardest in trying times.”

Judiciary need to be humane. At times like this it has to show judicial activism and creativity to stand by the poor, underprivileged and reign in the Government that foists decisions taking advantage of unassailable majority in the House.

(The writer is a former banker and columnist)