With no substantial cash in hand, no loans, no land, no labour, no help in early stages, and yet, the agriculture field is turning lush green. The work of sowing the paddy through mechanised transplanters started on June 16 this year and this has brought smiles on the face of three young enthusiasts corporate employees turned farmers who were destined and determined to succeed in the field of agriculture. It all happened when business was down and pandemic was on. Father George Quadros played a key role and was instrumental in helping these three enthusiasts to make their dream come true. VIKANT SAHAY and SAGUN GAWADE talked to them to find out what inspired them to getting into the muddy fields from their plush corporate office 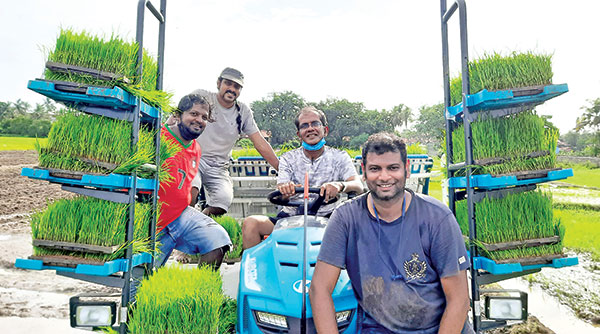 An aircraft maintenance engineer by profession who did his engineering from Coimbatore’s Nehru College of Aeronautics, the journey of Goencho Xetkar began in November 2020 before working for airline companies including Jet Airways for ten years. As airlines were not operational due to the pandemic, Kenneth Lopes, 41, came to his motherland in the midst of the virus and was at home with virtually no work to do. Meanwhile, a relative of Kenneth, Neville Luis 41, was getting into farming in Goa. Neville has done his MSc in Geology from Goa University and has been working in Australia for a private company which engages in oil rigs. He too returned home during the pandemic and along with his childhood friend, Stanley Fernandes, 40, who is a science graduate with Geology as his major from Dempe College and worked for a telecom company for over a decade in Mumbai and Pune, came together to fulfil their childhood dream of farming.

Neville Luis, who initiated this move, got inspired to return to the fields when he was only six years old. He used to accompany his grandmother to the fields to ‘work’. “Pandemic came as an opportunity for me as I was staying home after returning from Australia. Stanley and I are college friends and we used to ride a bike overseeing the green fields of Goa and this gave us an idea. “Why can’t we do this ourselves?” I asked to which Stanley agreed. Through his relative in Aldona Stanley picked up 3,800 square metres field on lease for farming. This was for only one season and it was basically for experiment. This happened last year in 2020. It all began there,” said Neville Luis.

Both Stanley and Neville started in the field of agriculture manually. They both realised that there was no labour, no machinery, no tractor, no tiller and for two weeks they experimented manually. “However we googled and found that mechanical farming was possible in Goa which saves, time, money, labour, etc. Father George Quadros’ name popped up on Google. We approached Father Quadros and his hand held us and trained us,” said Neville Luis.

He further added the procurement of the Japanese-make Kubota machine was an issue. “We all pooled in our savings to buy this machine which cost us Rs 14 lakh. Along with that we had to buy some more machines which were an additional cost. However, we managed without any support from anywhere. Father helped us to procure the Kubota machine. Also, it was difficult to even get a place to set up the paddy nursery. Finally we approached the Vicar General of the Archdiocese and with his help the Parish priest of Carambolim was very kind to lend us a place behind the Carambolim church. That is where all our backhand operations are on. In spite of having the machinery, but no place, we wouldn't be able to start,” said Neville.

In fact, Father George Quadros had written a letter to the Directorate of Agriculture on September 15, 2020 seeking help on subsidy for the Kubota machines but there was no encouraging response from the Directorate. All these three Goencho Xetkar members discussed among themselves. “It is not going to happen so let us use our savings to contribute for buying the machine and we did exactly that,” said the team members.

The Goencho Xetkar team, which now owns a Kubota machine is renting it out to the interested people at Rs 1.5 per square metre. “We accept bookings a month in advance over phone calls. For now, the machine is booked till mid of July and the estimated area our machine will be covering is about 3,20,000 square metres,” informed Neville Luis.

When Herald approached Father George Quadros, who is popularly known as ‘PaddyMan of Goa’, said that “Mechanisation of paddy cultivation is the need of the hour. It has become a people’s movement and Directorate of Agriculture must take advantage of the situation and be proactive. The directorate should move from a programme to a process approach in the field of paddy cultivation. Team of Don Bosco Society is making sure we have rice on our plate during these COVID times, taking all risks and moving out to help our farming community.”

Kenneth Lopes, one of three-member Goencho Xetkar team and an aircraft maintenance engineer, told Herald that, “Father George Quadros is our Guru. We are just following his footsteps and replicate his technique. We all were in an on-job training with Father for one full year. We, all three of us, have invested all our savings into this. We got no financial support from anyone. We launched ourselves on June 16 this year. We will be harvesting the paddy in another 3-4 months and I am confident that the produce will be much larger than the manual one.” 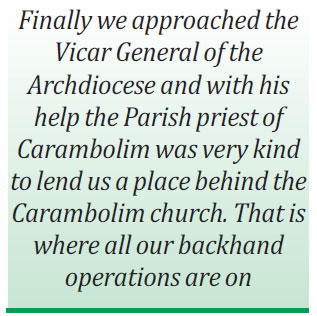 Stanley Fernandes a geologist and a former corporate honcho who left his cushy job just to walk into the muddy field as a farmer told Herald that, “the corporate world was too pushy and was constantly shifting me in different places. I resigned the corporate job. But when we landed in the paddy field we realised that the moon was being promised by the government for the farmers but on the ground it was very difficult to find any support. Getting manpower, seeds, funds etc was like a huge hurdle. We spent a lot to develop the field. Then the mechanical farming came as a saviour. It saved us money, time, manpower and efforts, all in one basket.”

He further added that now we are prepared to help anyone who approaches us and we can help them from the scratch. “When we tried doing manually in our leased land in Aldona, we spent about Rs 28-29000 and had we done that mechanically we would have not only saved time but also invested money by at least 50 per cent. With mechanised farming the yield grows 15 per cent more than that of manual.”

Joaquina Rodrigues, a farmer from Agassaim in Goa who took the help of the Kubota machine offered by team Goencho Xetkar, told Herald that, “This was so simple and the sowing of the paddy is done in virtually no time. About 1000 square metres of area was sowed in 30 minutes which is not possible at all when we do it manually. We used to spend Rs 4500-5000 for this same job over labour and that too was not reliable. With this machine, the total cost came to Rs 1500. I am sure many farmers who are not going to the fields because of cost and labour, will come back and the agriculture in Goa will grow multi-fold.”