The manner in which the Corporation of City of Panaji (CCP) has undertaken various works under Smart City Mission has been drawing flak from the citizens, who are irked due to road closures, making it difficult to travel in the city. There are road blockades at every intersection as CCP is in a hurry to complete the projects before the June 2023 deadline given by the Union Ministry of Urban Development. VITHALDAS HEGDE digs deep into the causes for inordinate delays in completing the projects and what is the road ahead for Panjikars 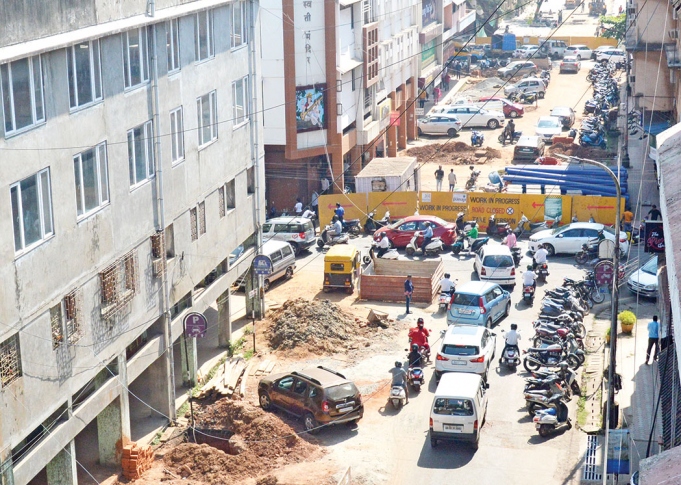 Panjim was among the first 100 cities selected by the centre when the Prime Minister Narendra Modi launched Smart Cities Mission in June 2015. The Smart City Mission’s objective was to promote cities that would provide core infrastructure and give a decent quality of life to its citizens, a sustainable environment and application of ‘smart’ solutions.

However, even after over six year of its inclusion as one of the 100 Smart cities in India, Panjim has not achieved this target due to delay in executing a number of projects.

The Smart City works were going at a snail's pace until the State government received an official communication from the Government of India directing it to complete all projects under Smart City Mission by mid-2023.

In a bid to meet the deadline and complete the Smart City works, the works of around Rs 600 crore have been undertaken in a single go, with agencies including Sewerage and Infrastructural Development Corporation of Goa Limited (SIDCGL), Goa State Urban Development Agency (GSUDA), Public Works Department (PWD), Water Resource Department (WRD) and others getting in action mode.

Delay in the execution of approved works is mainly due to lack of coordination between various government departments and lack of monitoring by the proponent of the projects.

Civil works such as reconstruction of road pavement crust, storm water drain, utility crossing chambers, footpaths and landscape works are being developed. Replacement of water supply pipelines, sewage lines, electricity and natural gas lines are also part of the ongoing projects. The CCP had also appointed consultants to look into smart solutions for the development of Smart City in the areas of e-governance, waste management, urban mobility and energy management.

The Imagine Panaji Smart City Development Limited (IPSCDL) has approved construction of two Smart Roads and the work of the portion of the first Smart Road i.e. from Bal Bhavan, Campal up to Fire and Emergency Services junction is nearing completion and likely to be inaugurated on Republic Day even as the work of the remaining part i.e. from St Inez Junction to Adarsh Colony, Miramar is on.

The second Smart Road will be from Old Patto Bridge to Four Pillars junction, a stretch of 1.4-km, which will be undertaken after the completion of the first Smart Road.

Also the construction of the much awaited football-cum-parade ground at Campal is on as part of rejuvenation of Campal area as a green space with recreation centre and facility for Smart parking.

But the citizens from Panjim are facing a lot of hardships due to the closure of roads and rampant digging. Reckless digging of roads is being done across the city much to the annoyance of the citizens. The businessmen have also complained of loss in the business due to road closures.

Revenue Minister and Panaji MLA Atanasio `Babush’ Monserrate, and Corporation of the City of Panaji (CCP) Mayor Rohit Monserrate have urged the people to bear the inconvenience caused to them, stating that they will get quality infrastructure once all projects are completed and commissioned.

The Goa government in June 2016 had accorded approval for the formation of the SPV in the name and style of Imagine Panaji Smart City Development Limited (IPSCDL), for the purpose to plan, release funds and evaluate the development projects under the Smart City Mission, among other things.

The Atal Mission for Rejuvenation and Urban Transformation (AMRUT) envisages to ensure that every household has access to a tap with assured supply of water and a sewerage connection; the amenity value of cities is increased by developing greenery and well maintained open spaces (eg parks); and there is reduction in pollution by switching to public transport or constructing facilities for non-motorized transport (eg walking and cycling).

The Mission’s other thrust areas include enhancing amenity value of cities by creating and upgrading green spaces, parks and recreation centres, especially for children.

Former Corporation of the City of Panaji (CCP) Mayor and councillor Surendra Furtado has warned that the Panjim city is going to suffer during monsoon beginning from June due to haphazard and ill hurried works of Smart City. He said that he will be writing to the Prime Minister of India conveying to him the manner in which the Smart City works have been executed in Goa.

"I am not against development of the Panjim city. Panjim is in my heart. However, the incompetence of the Panjim MLA and the Mayor has resulted in entire collapse of the capital city," Furtado said.

"The Smart City architect once gave a presentation to CCP councillors regarding laying of pavers on the streets. When we enquired, he said that the work has been already awarded and will be executed in only four wards. This proves how the Mayor and the Panjim MLA are only carrying out Smart City works in select wards and ignoring the entire city," he complained.

"While the Smart City works were being planned by the Mayor and the heads of the Mission, none of the 30 councillors were aware of the works that were undertaken. We were never taken into confidence. Even the CCP Technical Section has no idea of the works that are being planned and executed. I built two bridges at Tonca and near Campal clinic without backing from Imagine Panaji Smart City Development Ltd. But, the entire Smart City juggernaut cannot complete a small culvert near the fire and emergency services headquarters for years," he remarked.

Former CCP Mayor and councillor Uday Madkaikar said, "The works of Smart City in Panjim started in 2016. Nearly six years have passed and the Mission deadline is nearing end. However, CCP is still doing the most fundamental works like constructing drains, sewerage lines and Smart roads. These works had to be started in the beginning of the project".

"The CCP wasted time in building beautification and recreational projects like the mangrove boardwalk, stairs and footpaths in the city sidelining the important works. Now as they realise that the deadline is fast approaching and they may lose the funds allocated by the Centre, they have hurried into the most needed projects causing inconvenience to the people," he said.

"The works that are happening today had to happen in the initial stages. These works if were planned earlier, the people would not be suffering in this manner," Madkaikar said.

Meanwhile, CCP Mayor Rohit Monserrate said, "The Corporation has nothing to do with Smart City. By virtue of being the Mayor, I am on the Board of Smart City".

"These are big civil works which cannot be planned like a building. In addition to that no government agencies have the plans of their pipelines wires and existing utilities. The Public Works Department (PWD) for example has no plans of their existing pipeline. The contractor had to do radar mapping of the roads to find them and then start the works" he said.

Taking a dig at the opposition, he said, "It is easy for the opposition to complain, but none of them have stepped on to the road".

Monserrate said that there is no possibility of funds going back to the Centre as we are fully utilising them.