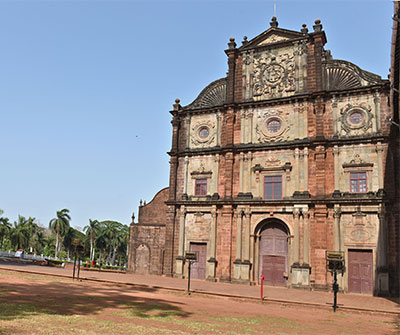 The recent spate of newspaper articles pertaining to the repairs that need to be carried out on the Basilica of Bom Jesus, Old Goa, a World Heritage Property under the custody of the Archaeological Survey of India (ASI) made me nostalgic and I decided to pick up my pen to jot down my perspective on the ‘preservation of the monument’.

I am an archaeologist by profession, having carried out conservation of protected heritage properties while working for ASI for more than three decades at different stations within the country and abroad. I served two tenures in Goa, as site manager and officer in charge of the World Heritage from 2003 to 2009 and 2014 to 2016. Hence I am aware of the significance of the property as protected monument and as a Church and its international status as a designated World Heritage Property, as also of its intangible value, since the sacred relics of St Francis Xavier are preserved within the Basilica and their exposition are held every ten years. Moreover, I have made presentations of the Basilica’s upkeep and its conservation at local, national and international platforms.

During this period, I was asked pertinent questions, on the status of conservation of the Basilica, the methodology adopted, funds required for its upkeep, availability of skilled workers, plan of disaster management and on its management module.

Having made the above statement, my mind goes back to July 7, 2017 when I was presenting a research paper, at an International Conference in Lisbon on ‘Preserving Transcultural Heritage: Your Way or my Way’, the title of the paper being ‘Preserving The Exfoliated Weathered Fabric of Basilica of Bom Jesus, Old Goa: Approach - Approach Conflict’. Here, while making a strong case for treatment of the exposed laterite core of the facade and walls of the monument, I stopped midway and my mind wandered and wondered for a few seconds as to why I am presenting this paper in Portugal when it should be presented in India. However, the paper has been published and is in public domain for critical review. The suggestion is for first treatment of the exposed surface with a ‘Laterite Pack’ or replacement of damaged portion by fresh mature laterite brick cut to size. The former technique has been implemented at the St Augustine Complex, Old Goa and at a Buddhist Site at Dhamnnar in Madhya Pradesh by the author and his team. Secondly, if need be with the consent of stakeholders, the treated surface could be covered with a sacrificial coat similar to that of other Churches and Convents in Old Goa, ie lime plaster.

This methodology has been presented to the Panel of Experts (POE) of ASI and has been forwarded to the Expert Committee for their approval. For record, the Basilica was deplastered by the erstwhile Portuguese government in Goa as a conservation policy as that prevalent in Portugal in 1950s.

Now, let us glean into what is conservation and what is the policy of conservation in India and abroad. Conservation is an ongoing process to retard the aging process as a result of decay/deterioration due to the vagaries of nature and negative intervention of humankind; to prolong the life by nurturing both natural and human made objects, with a belief that we would preserve it in its original form as much as possible; to be transmitted to the next generation as a historical tangible evidence of the past events without being tampered. Further, each generation contributes their inputs to this chain, either in the form of repairs or restoration.

Thus, the contemporary present is blessed with the sum total of the past, which we designate as Historical Sites and Monuments. Hence, the present generation has the obligation to protect, preserve and manage these assets of the bygone era. Now, let us view if is it really happening.

UNESCO’s, International Charters and Manuals on Conservation and their policies, practices, profess preservation of these monuments and sites for posterity. The member countries in general and India in particular, have also been inspired to frame their own guidelines, combining the international regulations with its own time-tested module to draft its own Policy on Conservation, 2014. This complements the Acts of the Parliment – The Ancient Monuments and Archaeological Sites and Remains Act, 1958 and Amendment and Validation Act 2010.

Making a generalisation, these documents speak volumes in theoretical framework on good practices to be adopted. However, the ground reality while implementing these concepts in the field situation appears to undergo subjective interpretation. Thus, the decision making and decision taking is inconsistent due to intervening variables. Like, varied skills of the artisans, non-availability of raw material, inappropriate technology and the most significant is the inconsistent application of mind, even though we may have followed the Conservation Manual in principle and spirit. The resultant end product, after following due process, would either be harmonious with the original structure or be completely incongruous.

The first step in preserving the Basilica is to protect the Outstanding Universal Value (OUV) of the site. This can be done by safeguarding its significance and historical value, retaining its physical and cultural authenticity, protecting its integrity as a single unit and having a strong legislation and management to safeguard any negative interventions within the property itself, which is the core area and the buffer zone surrounding it, as spelt out in the nomination proposal.

Let us glean on the four parameters and see where infringement has happened which could jeopardise the World Heritage Listing of the property. Firstly, the significance is retained. Secondly, the authenticity is sufficiently maintained since no major intervention has taken place and even then all repairs and conservation was undertaken as per the norms using period material and retaining the original fabric. Thirdly, integrity has been sufficiently retained even though a de-notified national highway is bisecting the property, which needs to be pedestrianised in the near future. Fourthly, legislation is in place – AMASR Act 1958 and amendment 2010 – which demarcate the area into Protected, Prohibited and Regulated areas which overlap with the UNESCO terminology – core and buffer zones.

Further, it’s obligatory for the state party to follow the ‘Operational  Guidelines’ and the status of the property is monitored every six years through the periodical reporting undertaken by the state party and submitted to UNESCO, though no funds are given by UNESCO for the conservation of the World Heritage Property nor sought by the State Party. Thus the tag is only for branding and creating awareness amongst the community on the historical significance of the site.

Then, where is the problem and why is there so much of a hue and cry in the papers. The answer is simple. Lack of communication between the major stakeholders, that is owner of the property – Church Authorities – and the custodian of the property – Archaeological Survey of India. One refers to the structure as a ‘Church’ and other addresses the same as a ‘Monument’. To one, it is of immense spiritual value and to the other it is a World Heritage property. So the two, as in the past years, should have sat together and listed short term, intermediate and long term strategy for the repairs and conservation of the assets. Agreed, there could be shortfalls from either side, but since conservation is an ongoing process a document – Management Plan – is mandated and state of conservation be documented on priority to address all the conflicting issues that need to be addressed in next five years.

Hence, let good sense prevail amongst the stakeholders and settle the conflicting issues internally by carrying out preventive conservation round the clock, while planning major interventions after following due process and detailed documentation.

The way forward is to frame a functional Management Plan in which the State government can take the lead and expedite the scheme envisaged in 2007 by the writer and also the then Collector North Goa, Keshkamat to formulate an ‘Old Goa World Heritage Management Authority’ similar to the one at Hampi World Heritage Site. The final draft had been forwarded to the State Law Ministry for vetting and notification by the competent authority. However, it got stalled, not due to administrative will but due to the political equations that existed at that point in time at Old Goa.

I conclude by confessing that delisting of the property by UNESO is not the immediate concern of the custodians. The property was listed in 1986 and the evaluating body, the ICOMOS even then had suggested that the property be listed as World Heritage and simultaneously be declared World Heritage in Danger, so that all the regulations of management and safeguarding of historical context and conservation can be first put in place. Now is the time to sit across the table and settle the differences amongst the stakeholders and carry out the planned and time bound conservation for the preservation of the Basilica of Bom Jesus.