Protect biodiversity to prevent the next pandemic

The second wave of Covid pandemic is now sweeping across the country, with the number of daily cases crossing 3 lakh. While the immediate focus is on controlling the spread of the virus, there is also an equally urgent need to understand the factors leading to the emergence of such pandemics. NITI B. JADEJA & ABI TAMIM VANAK of the Ashoka Trust for Research in Ecology and the Environment, Royal Enclave, Srirampura, Jakkur, Bengaluru have the details. 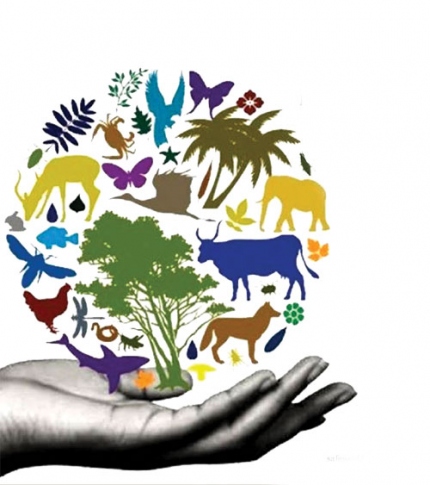 he Anthropocene, the age of humans, has been characterised by the indelible impression humans are leaving on this planet. Most of this, however, is not positive; extensive habitat destruction as a consequence of anthropogenic activities like agriculture, deforestation, industrialisation, and urbanisation has changed the Earth, affecting its climate, dooming millions of species to extinction, and ultimately risking our own existence. The dwindling proportion of unaltered land for animals and wildlife that remains today, has led to increased interactions between humans and animals thus posing the threat of pathogen transfer. Chikungunya, Yellow fever, Ebola, and Coronavirus are examples of pathogen spillover from animals to humans. While understanding the emergence of novel pathogens and transmission of viruses from animals to humans, the SARS-CoV-2 pandemic, the sixth global health crisis since the flu pandemic of 1918, and its repercussions have brought the world to a standstill.

In addition to more than 1 lakh lives lost to this pandemic, the International Monetary Fund projects India’s Gross Domestic Product value to have contracted by 10.3% in 2020, widening the rich-poor gap at large. This pandemic has cost 100 times more than the estimated expense of its prevention by preserving biodiversity, which highlights the need to address environmental challenges now more than ever.

The global estimates of mammalian viral diversity by Mark Woolhouse and colleagues from the University of Edinburgh had revealed that since the discovery of the first human virus (Yellow Fever virus) in 1901, about three to four new virus species are being discovered every year, with an estimate of about 1.6 million viruses still unknown to us and a prediction of 500,000 pathogen spill-over instances of these unknown viruses. The assessment of habitat disturbance involving 6,801 ecological assemblages and 376 host species worldwide by Rory Gibb of University College London and colleagues confirms how intruding into natural habitats has led to increased human-animal interaction. This work proved how alterations in land use have facilitated animal-host interaction and hence increased the risk of zoonoses. Over the last decade or so, efforts to identify potential pathogenic viruses have accelerated. However, there is a need to integrate holistic strategies for surveillance of novel diseases in humans and animals with the understanding of the impact of the environment and climate. The otherwise not so well understood ‘OneHealth Approach’ is now being widely accepted to implement the required integrated surveillance strategies in zoonotic disease management in a few countries like Kenya and Sri Lanka. While deforestation is believed to be one of the key drivers of emerging diseases there is a need to study specific cases to dissect the underlying mechanisms and address them.

The State of World’s Forest report (2020) by the Food and Agriculture Organisation of the United Nation makes use of ‘forest area’ as an indicator of Sustainable Development Goal 15: Life on Land (SDG Indicator 15.1.1). As per this report, a large population and extensive agriculture account for the loss of biodiversity in India. According to India’s Ministry of Environment, Forest and Climate Change’s Annual Report 2019-2020 statement for total forest area approved for non-forestry use (under FC ACT, 1980) a total of 11467.83 ha of forest cover was used for 932 non-forestry projects which include road construction, optical cable lines, mining, transmission line projects. The Global Forest Watch databases indicate for the year 2010, India had 31.3Mha of natural forest of which 115kha has reduced by 2019.

A recent study by the Central University of Orissa’s Rakesh Paul and Kakoli Banerjee in Koraput district (Orissa, India) calculated the change in both forest cover and fragmentation from years 1987 to 2017 and also made predictions for 2017 to 2027 which confirmed a gradual decrease in the forest cover and an increase in fragmentation. There is a substantial increase in the mining activities in this region owing to the establishment of three major industries namely National Aluminium Company, Damanjodi, Hindustan Aeronautics Limited, Sunabeda and Ballarpur Industries Limited in this region. Goa is one of the Indian States that is heavily impacted by mining activities. In 2010, the state of Goa reported 117kha of tree cover, extending over 32% of its land area. In 2019, the State has lost 41.6 ha of tree cover which is equivalent to 15.1kt of CO of emissions as per recent Global Forest Watch figures.

Goa and its endangered

The geographical canvas of Goa is naturally bicoloured with the blue of the Arabian Sea marine life and the green from the diverse forest cover of the Western Ghats. The State has an interesting topography that consists of semi-evergreen forests, mangrove forests, creeks, beaches where rich endemic species of rare flora and fauna inhabit. The Western Ghats of Goa are among the 36 of the most biodiverse regions of the world and one of the 4 in India. The forest and biodiversity of this State are now at serious risk because of deforestation for mining and road constructions, uncontrolled tourism, and chemical industries. Bhagwan Mahavir Wildlife Sanctuary and Mollem National Park, Cotigao Wildlife Sanctuary, Mhadei Wildlife Sanctuary are this State’s biodiversity rich hotspots to sites like Bondla Wildlife Sanctuary, Navelim Wetlands and Netravali Wildlife Sanctuary have been added recently by the Bird Life International. The economist Ram Ranjan has assessed the key drivers of deforestation in Goa according to which mining activities are the major reason for deforestation which has severely impacted the State’s biodiversity.

The State has also received much attention in the past owing to the rapid road and coastal infrastructure development at the cost of the environment. The recent railway and highway expansion projects (Panjim-Belagavi National Highway expansion, Tamnar power transmission project and South Western Railways’ double-tracking project) were sanctioned by the State government of which two projects were granted the Wildlife clearance through a virtual meeting involving the National Board of Wildlife. Implementation of these projects might alter the natural ecosystems of Bhagwan Mahavir Wildlife Sanctuary and Mollem National Park. The loopholes in the EIA regulations with respect to the sanctioning of railway and highway expansion projects in Goa have been reviewed by Girish Punjabi and Colleagues (2020) which includes problems in the reported methodology for the baseline survey on plant species, missing impact assessment on insect and arachnid diversity, missing information on the river basins of South Goa, underestimation of the bird species and several other equivocalities.

Changes in Land-use, Disruption of the Ecological barriers and Diseases

Deforestation and other land-use changes can i) drive the evolution of microbes into pathogens or ii) disrupt the dynamics of existing pathogens within their reservoir, thus increasing the chances of disease emergence in both cases. For e.g: in niches like fragmented forests, associated forest edges, agricultural fields, and pastures, many wildlife species are likely to disappear as forests are cleared, while others that are able to adapt become more concentrated further increasing the chances of infections. Habitat modelling and evolutionary studies of wildlife populations have shown how closer animal-animal interactions have led to crossovers of viruses across wildlife species. The abiotic factors that impact the host-pathogen systems in nature are in turn affected by human activities. More than a decade ago, Kate Jones from the Zoological Society of London and colleagues had assessed the emergence of 335 infectious diseases between 1940 and 2004 of which 60.3 % were zoonotic and 71.8% of these were of wildlife origin with an increasing rate of emergence over the years.

95-99% of the microbial diversity is yet unknown to us and of the million undiscovered viruses in mammals and birds, more than 45% have the potential to harm human health. The ‘infect-shed-spill-spread’ model described by Raina Plowright of the Montana State University and co-authors make use of the bat to human transmission model to explain the infection dynamics in reservoir hosts, pathogen spillovers in cases of land-use changes. This article emphasizes the need for interdisciplinary action from the environmental, wildlife, and human health fields to address loss of landscape immunity and resulting zoonotic disease emergence.

We are living in the UN decade of ecosystem restoration (2021-2030) which calls for government, civil societies and private firms to dedicate efforts and resources for ecosystem restoration. Natural means of forest and grassland regeneration can restore landscape heterogeneity and resilience in biological forms. The efforts of the Foundation for Ecological Security in replicating the natural ecosystems at various states of India are ideal examples of natural methods of building back the degraded landscapes.

The loss of forest has been identified as the major reason for the emergence of Kyasanur Forest Diseases (KFD) in the Western Ghats and an increased threat to the forest tribes and vulnerable communities was recognised. The KFD, although limited to India, has spread across states of Tamil Nadu, Kerala, Goa and Maharashtra. Our previous research has shown that deforestation in the Western Ghats for agricultural purposes has led to the creation of “risky” habitat mosaics. The case of KFD has indicated the need for integrative approaches to manage public health inclusive of conservation strategies for humans, animals, and the environment. The need to transform India’s current health management system is highlighted from another example where Sreejith Radhakrishnan from the Imperial College London and colleagues in their recent historical review of rabies disease identify the British era’s old administration and societal approaches that persist to date. A new stage facilitates collaborations to address human, environmental, and animal health in a unified way such that the ecological issues giving rise to the threat of zoonotic diseases can be resolved. The proposed initiative of the National Mission on Biodiversity and Human Well-being for India is an example of one such interdisciplinary action which integrates diverse aspects of Ecosystems, Climate Change, Disaster Risk Reduction, Agriculture and Health to build biodiversity science. The (sub-program) One Health and Zoonoses component of this mission is based on integrative sciences where collective efforts by experts from interdisciplinary areas for health management in India are proposed.

The rate of communicable diseases has fallen from 61% to 33% from 1990 to 2016, (National Health Profile) in India. This progress of India’s public health management has been challenged by the current SARS-CoV-2 pandemic and the potential threat of similar outbreaks in the future. In such scenarios, the role of governmental actors and agencies at all levels is critical as there is a need for integrative action which has been discussed by Senior Policy Analyst, Mridula Paul and colleagues at ATREE. This extensive review of existing networks of the Indian Governmental agencies helped us identify the gaps in individual efforts of these authorities and highlighted the much-required intersectoral collaborations. For example, the absence of the wildlife sector in zoonoses management and the insufficient participation of the Ministry of Environment, Forest and Climate Change in addressing zoonotic diseases were identified as the areas where co-participation is required. The SARS-CoV-2 pandemic has proved that Government and related private agencies are capable of rapid political responses and timely financial support to enhance disease surveillance and vaccine development in emergency situations. However, if we prevent scenarios that lead to such outbreaks it would cost us much less and could be better managed. Biodiversity crisis, climate change and deforestation need sufficient consideration in the designing of health and environmental policies. The financial figures indicative of the country's economic growth needs to consider the damages caused to natural ecologies. Current trends in the management of biodiversity and natural resources might turn ‘nature’ into history before mankind can even peak its population.