Reflections of a river: Oysters, clams return after ages only to be exploited immediately

Goa’s appetite for ‘Tisreos’ and ‘Calvam Hadde’ delicacies are threatening its future. Recently, environmentalists were delighted that clams and oysters had returned to the Zuari river bed after a gap of a few years. But their joy was short-lived and soon turned into dismay after locals rushed to the Chicalim-Sancoale bay and other similar areas to collect the tisreos and calvam hadde in large numbers. This overexploitation raised concerns about irreparable damage being caused not only to marine life but also its natural eco-system, which could hamper breeding activity that could lead to their disappearance in the future. DHIRAJ HARMALKAR speaks to stakeholders who share their fears 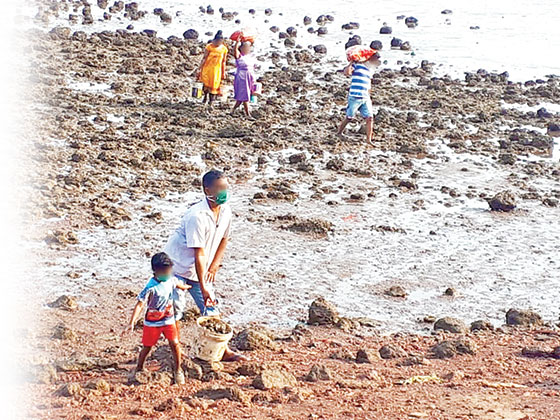 While the rest of the State is grappling with the COVID-19 pandemic that has set the world on a cautionary note, it is a different story around the Chicalim-Sancoale bay. There appears to be no sense of caution for coronavirus or any social distancing norms as people have been gathering in large numbers frequently despite the pleas of the police and the environmentalists. The Greens have come into the picture to stop the overexploitation of ‘Tisreos’ (clams) and ‘Oyster Shells’ (Calvam Hadde), which have incidentally just made a comeback to the Zuari river bed after ages.

The first to notice what was happening and bring it to the alert of all authorities concerned was the Chicalim Biodiversity Management Committee (CBMC) members. In the last week of April, they even managed to stop people from gathering with the help of the Vasco Police. The cops assured the CBMC members that they will not allow people to enter the seawater in large crowds to collect clams.

While this was at Vareg Island, Chicalim, Cyril Fernandes, a Chicalim BMC member saw that people from neighbouring areas were now coming at the site of St Anthony Cross at Dabolim in the wee hours of the morning. So there was the issue of how to stop people from Chicalim, Dabolim, Sancoale, Cortalim, Zorinto, Quellossim, Thana, Consua, Cuelim etc.  There were even people coming from canoes across the Zuari River from Agassaim and Siridao.  Similar large crowds were since in Sancoale near the old church as well.

While the office of the sub-divisional magistrate Mormugao, Chief Minister and local police took cognizance of these concerns and have been trying to get people to refrain from such activity, the problem persists. As the saying goes, ‘where there is a will, there is a way’, even if it means at the cost of marine life.

Even the Chicalim Parish Priest Dr. Fr. Bolmax Pereira has been repeatedly appealed to the public to villagers to desist from venturing out into the low tide water during this sensitive period of the lockdown.

Rui M Da Costa Araujo, Chairman of CBMC added, "Gathering such a huge number of persons in one place is a violation of the present lockdown. Such crowds will help facilitate transmission of COVID-19.”

While it has been a game of cat mouse with the cops and the public, the police have often come to the aid of CBMC members and managed to put a stop to such activity and have also been present before the rise of dawn. But with the way things are going, every few days; one can spot few people either collecting tisreos or calvam hadde.

CMBC members also pointed out that whenever there is a low tide, it attracts people and their actions may spell doom for the biodiversity of Zuari bay.

“With a fresh crop of Haddes likely to emerge, the locals may once again approach the low waters to forage them from the site and take home for extraction and consumption. It could lead to the final blow on this natural breeding habitat hotspot and cause the complete destruction of the bi-valve species," said Cyril Fernandes.

"In normal circumstances, the shell cover is opened by the extractors at site with a hook- like instrument and the oysters extracted. The remains of the empty shell or Haddo are left in the water body's ecosystem. The empty shells or the mother shell is essential for the fresh breeding of the oysters.  But this low tide season saw the carrying away from the bay the entire Haddes by the locals to their homes. Instead of extracting the oysters at site, the locals uprooted the Haddes from the river bed and carried them home to extract it at their residences. This horrible action by hundreds of the locals has emptied the riverbed of this precious living organism that helps the bio-diversity of the riverbed," Cyril added.

Earlier few days ago, at the Vareg Island in Chicalim Panchayat jurisdiction, tisreos (clams) saw a return after nearly four to five years breeding in huge quantity this year.

This has been highlighted by the appeals made by Chicalim Parish Priest Dr. Fr. Bolmax Pereira.

“This year we are lucky to get tisreos and therefore we should behave responsibly and preserve and protect these marine resources for future posterity and not exhaust it completely,” said Fr in his message to the public.

He added that the Zuari river bed; especially the Chicalim-Sancoale bay has traditionally been the hotbed for oyster breeding, particularly the window pane oysters and also the clams. “These were on the verge of extinction due to overexploitation over the years and the starting of shipping and ship repair activities in the bay. For nearly 4 to 5 years the bay had almost lost its treasures of clams and oysters. Fortunately by God's grace, this year clams resurfaced coinciding with the lockdown imposed due to the COVID pandemic,” he said.

“If at this time, we want to preserve the clams for the future people need to refrain from extraction of clams to allow the breeding bed to re establish itself. Secondly, lifting up of the oyster shells substratum locally called Hadde, from the natural riverbed will cause irreparable damage to the river bed and eco-sensitive habitat as erosion of sand will take place and the baby oysters removed from its natural habitat will die off. Hence we need to be responsible to preserve and conserve these natural marine resources for our posterity" Fr added.

Captain Viriato Fernandes, member of Goencho Awaaz group opined that Chicalim village has been blessed with some natural resources like river, springs, fresh water ponds, fertile agricultural fields, etc. “The Chicalim bay that was world famous for its windowpane oysters, clams, oysters, etc has in the recent past lost its shine due to some unplanned exploitation of the resources coupled with some natural vagaries due to the environment, unchecked shipping activity of barge repair in a number of workshops along the River Zuari adjacent to the village, etc. The window pane oysters are almost extinct.

He further added that some concerned villagers in the last few years along with members of the Village Development Committee, the BDC as also members of the panchayat and some concerned citizens and social organizations like the CVAC took some active interest to restore the window pane oysters by involving scientific research agencies like the NIO and ICAR. “Efforts have been made in the recent past like protection of the bay in the CZMP plan for the village. Scientific studies and seeding undertaken by concerned organizations and schools have started bearing fruits. Pearl breeding in the bay is another adventurous activity that the villagers are looking upto. Such active involvement and concern are bearing results with the tisreos returning to their home in Chicalim bay and holding out the hope of a total revival of the past years of marine glory," Viriato added.

CBMC members felt that it is the responsibility of our society to protect, preserve and conserve the biodiversity and that it will be difficult to regain such ecological wealth once lost.

“The authorities should act in cohesion and plan a long term plan to stop this destruction of the Zuari waterbody and its natural breeding habitat. Part of the area around the Vareg Island in Chicalim panchayat jurisdiction and part of Zorinto in Sancoal panchayat should be earmarked as ‘no entry’ areas and banned from extraction of tisreos and oysters respectively. In this manner, part of the clams and oysters crop shall remain untouched, undisturbed and safe for future breeding of these two species. Some harsh measures are needed to preserve this gift of nature given to Goa bountifully,” said Cyril.

Another CBMC member, Rui said the unavailability and absence of pysters, Mussels, clams etc for past few years is due to over exploitation and extraction of these natural marine resources for personal consumption and for commercial sale by many people.

He added that around five years back people from Cortalim, Agassaim side used to come in hundreds, sometimes in canoes and carried out rampant extraction of oysters, clams at that time. which has adversely affected the breeding of these clams and oysters.

He added that as per the Biodiversity rule of 2002, the local villagers have got the first preference and the right over the natural resources of that particular village and not the outsiders. He also revealed that recently with the help of some environmentalists and scientists it was collectively decided to totally avoid going inside the river water to extract oysters and clams but unfortunately the message went out wrong that the clams can be extracted at May end and therefore many flocked at the Chicalim Bay.

"We want that these oysters, clams and mussels should breed in ample and we need to preserve and protect it for posterity before it is too late" Rui added.