While a large section of Goa’s population is up in arms over the coal issue, the State government has paid no heed to the demands of the people. The whole issue had started with the new Sagarmala Volume 5 by Eckom, which intends to expand the ore handling capacity at the Mormugao Port Trust (MPT). SURAJ NANDREKAR brings out the highlights of the report and the impact of the expansion on the State. 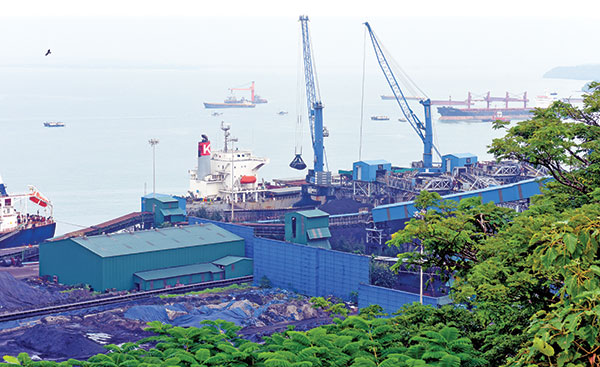 Susanne Fernandes, (name changed as per request), a 59-year-old lady sits by her husband’s bedside, who is suffering from cancer.

While nursing her husband, a few metres away from the railway tracks of Majorda, Susanne also cleans the dust, the black dust showing the lensman “this has killed us”.

Indeed, while the spillover of the coal transportation on the railway tracks is clearly visible, the situation is no different in the houses.

She says that the coal has choked the lungs of people around and it has already claimed hundreds of lives.

“Now they want to take away our houses to bring in more coal transportation,” she says.

This is not the story of one Susanne and is the same right from Vasco to Kulem where the wagons carry the coal.

“While as if this was not enough the government wants to expand the facility at MPT and also double tracking the railway line so that more transportation can be carried out to the neighbouring states,” said Captain Viriato Fernandes, who is fighting the battle under the banner of Goencho Ekvott (GE) with the State government as well as the South Western Railway (SWR).

He says while the State government has been in the denial mode al through on coal transportation, the document - Sagarmala 5, which is in Black and White, exposes the government’s lie.

Captain Viriato also says with several ports in Karnataka and Maharashtra there is no need to bring coal to Goa.

“Why should coal come to Goa? Goan does not need or does not have facilities for its usage. If Karnataka wants there are enough of jetties in that States,” he said.

The Sagarmala 5 is indeed a draconian document, if one goes by and if it is implemented in toto… it could a remedy for Goa’s disaster.

While the current handling of coal has cause huge environmental degradation and dust pollution, the Central government wants to increase the coal handling capacity.

The document clearly states that double tracking of railways is a must to expand the coal-handling facility.

Not just this, the report also suggests that MPT could become a major coal transportation hub right upto jetties in Easters India.