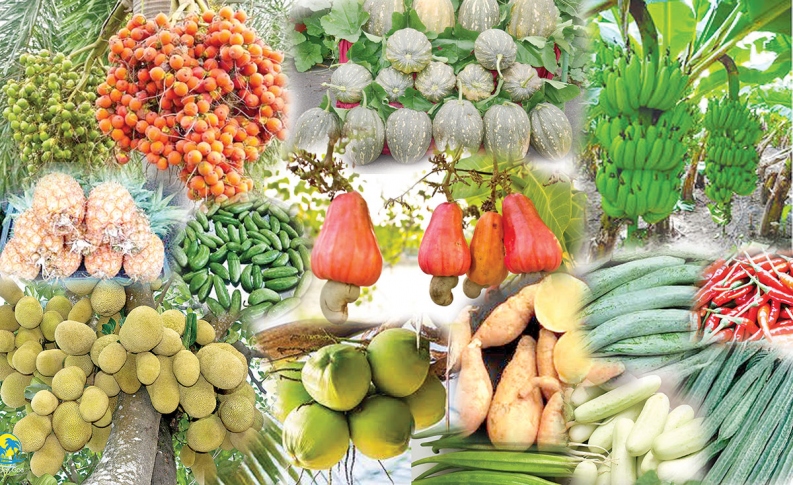 The Agriculture Export Policy of Goa which was notified this month, promises hope for the farmers of the State that their products can also be exported. Goa is preparing to take advantage of the logistic infrastructure which is being built now, most importantly the Mopa Airport which is likely to become one of the biggest logistics hubs in the Western coast. Team Herald takes a look on what the State government has planned for the farmers through the Agriculture Export Policy.

The Government of Goa has finally notified the Agriculture Export Policy (AEP) this month. In fact, the Government of India has aimed to double agricultural export from US $30+billion to US $60+billion by 2022 and reach US $100 billion in the next few years after that. Goa State believes that it can contribute its share above target by having a guiding policy for Agricultural Exports at State Level and a Monitoring Committee.
Agriculture produce from Goa such as cashew, Mancurad mango, Moira banana, Alsando, Korgut rice could form the export blanket of the State. Goa Cashew is organic by default. As of now 9500 hectare cashew plantation is under certified organic and additional 1500 hectare of cashew is under conversion stage. In addition to above, another 10,000 hectares of area under different crops is under conversion under Paramparagat Krishi Vikas Yojana (PKVY). Branding organic Cashew from Goa can fetch revenue to the State and increase farmers’ income.
The notification mentioned that the export of Agriculture and Processed Food Products Export Development Authority (APEDA) products from Goa in 2016-17 was 17740.23 metric tonnes with value of Rs 9881.12 lakh. In 2017-18 the export was 13585.93 MT of value Rs 7364.51 lakh. The major products exported from Goa are alcoholic beverages, jaggery and confectionary, miscellaneous preparation and cereals preparations, etc.
The broad objectives of Goa State Agriculture Export Policy (AEP), aims to increase farmers’ income and State share in national agriculture exports. Main objectives of the State government are to promote Goa as agriculture export hub of India; entrepreneurship development; to diversify export basket, destinations and boost high value and value added agricultural exports including focus on perishables.
The Goa government also through this new AEP wants to promote novel, indigenous, organic, ethnic, traditional and non-traditional agriculture products exports; creation of efficient export oriented infrastructure and utilisation of existing infrastructure; to set up an institutional mechanism for pursuing market access, tackling barriers and deal with sanitary and phyto-sanitary issues and also skill development of the concerned stakeholders in the agriculture export sector.
The government believes that Goa can become an export hub owing to the facility of Mormugao Port and Dabolim Airport and with upcoming green field international airport can multiply the opportunity for exports and boost State revenue. All this can be achieved when efforts of farmers are coupled with development of necessary export infrastructure in the State. Private entrepreneurs and Goa Chamber of Commerce and Industries (GCCI) will have to be involved in infrastructure development.
Providing of stable trade policy regime and reforms undertaken in Agriculture Sector will pave way for Agriculture Export from Goa. Directorate of Agriculture, Government of Goa is nodal department for Agriculture Export Policy and efforts like formation of FPOs, processing units etc, will boost agriculture exports from Goa.
Goa, India’s smallest State by area and fourth smallest by population is bounded by Maharashtra on the North, Karnataka on the East and south and by Arabian Sea on the west. Goa has an area of 3702 sq. km. The geographical location of Goa is between latitude 15 40’00’’ North to 14 53’54” North and longitude 74 20’13” East to 73 40’33”. Goa is a part of the coastal country known as the Konkan, which is an escarpment rising up to the Western Ghats range of mountains, which separates it from the Deccan Plateau.
However, the State faces problems for enough cultivable land to feed its own population. The coastal areas are exposed to salinity and do not qualify as good agricultural areas, while the inland areas are not productive enough. For its day-to-day needs of agricultural produce like vegetables, Goa is dependent on Karnataka and Maharashtra. Also, approximately one-third of the total land in Goa falls under forest areas.
The important crops, apart from paddy and pulses, cash crops like coconut, cashewnut, arecanut, mango, jackfruit, banana, pineapple are also grown in abundance. A variety of mangoes are grown in Goa. Some of the famous Mango varieties are Mankurad, Mussarade, Fernandine, Xavier, Alfonso, Colaco. There are two varieties of jackfruit grown here namely Kapo (hard) and Rasal (soft). The vegetables that form a part of the agriculture in Goa are brinjal, lady fingers, radish, cucumber, pumpkins, drumsticks, chillies, breadfruit and different varieties of gourds. Sweet potatoes, onions are also available. (See Box 1)
The export of Agriculture and Processed Food Products Export Development Authority (APEDA) products from Goa in 2016-17 was 17740.23 MT with value of Rs. 9881.12 lakhs. In 2017-18 the export was 13585.93 of value Rs. 7364.51 lakhs. The major products exported from Goa are Alcoholic beverages, Jaggery and confectionary, miscellaneous preparation and cereals preparations etc. (See Box 2)
Production centric approach has to be reoriented towards market centric production in order to boost exports. Agriculture exports, if properly supported by infrastructure, institutional backup, packaging, freight, transport and connected to the internal production system backed by market access will be in a position to transform agricultural economy. Low farm productivity to poor infrastructure, global price volatility to market access form the challenges in agriculture exports in the state but the broad objectives is to increase farmers’ income and State share in national agriculture exports.
Related news