SWEPT AWAY BY THE WAVES tourism industry in doldrums

The windswept sands of the beaches of Goa, undisturbed by footprints, the red flags along the shore and baton-yielding police patrolling are the startling testimony of a tourism season that has ended badly. Restrictions, lockdowns, curfews combined to send Goa’s tourism industry into a freefall. What happens next? Has Goa learnt any lessons from the pandemic-truncated season? Will the industry change course when the season opens four months from now? TEAM HERALD fanned out to talk to industry stalwarts for answers, but there were few coming. The focus has been on the season that has been lost, the second wave of the pandemic that was fueled by entry of tourists who were unchecked and the losses that were accumulated 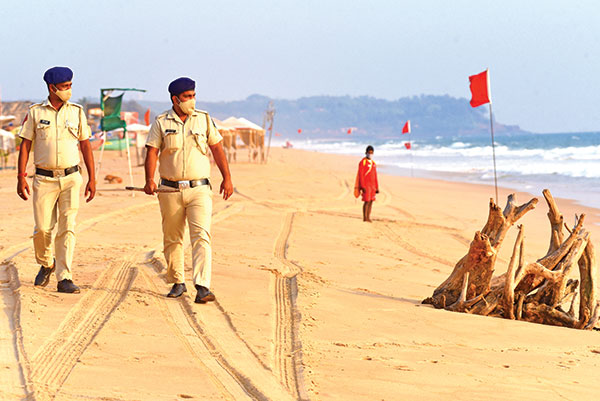 Previous year’s story repeats. Beach side shacks have shut down pre-maturely whilst the entire tourism industry came to a standstill much before the 2020-21 season ends on May 31.

We’ve all spoken about how blanket ban on mining operations, that once contributed over 30 per cent to Goa’s Gross Domestic Product (GDP) put an incredible pressure on the outsized tourism industry to balance Goa’s financial status. Tourism lived up to people’s expectation.

The business was at its peak mid-last decade but gradually its performance began to fluctuate owing to several reasons be it crime against women/tourists, impact of cyclonic storms, unruly taxi operators or overcharging cabs/hotels. The list goes on.

After many ups and down, a major blow to overall tourism was last year. Indeed, business across the world was severely impacted as uninvited guest, Coronavirus pandemic, checked in affecting the hospitality and tourism sector. Goa’s considerable population which is dependent on tourism for survival unarguably lost their source of income.

As a part of Unlock 2.0, Goa officially reopened for tourism on July 2, 2020 but unrestricted entry until High Court of Bombay at Goa’s intervention this month cost the State dearly. Goa   smallest State and a tourist heaven - has caught international headlines for reporting highest positivity rate across the country.

Cases began to rise from March 2021 as Goa government remained adamant that demanding mandatory COVID-19 negative certificate or RT-PCR test from visitors will have an effect on tourism. With consequences in front of all, the industry is now desperately looking forward to government support to survive and recover in 2021. The future is bleak.

“The impact has been tremendous. It is going to be difficult for most of us to survive. Last year’s savings are exhausted. It is a tough time and a big challenge for everyone,” President of Travel and Tourism Association of Goa (TTAG) Nilesh Shah said.

The association has come across instances wherein stakeholders are left penniless to even pay their employees. “No bank will give loan because the balance sheets are blank. A lot of help is needed from the government,” he said as he also admitted that the ordeal is being faced by several sectors other than tourism.

Certain wrong decisions in the past and barely any discussion on efforts to revive the industry during recovery phase could prove a doom for the stakeholders.

Past President Savio Messias has come down strongly on the government for wrong decisions leading to a disastrous situation in Goa. “The situation is very bad. We opened for tourism (July 2, 2020). It was a wrong decision. News about Goa’s high positivity rate is flashed everywhere. We now have to re-build confidence among the tourists that Goa is safe,” he said.

The veteran has suggested that re-opening doors for tourism in the future will have to be cautiously carried out, stating, “We have to really go slow and make sure Goa is not attacked by the third wave. If it happens, we are doomed.”

Another leading tourism leader Charles Bonifacio has also been critical of government for treating the second COVID-19 wave lightly. “Government miscalculated since the beginning. It has led to bombing of COVID-19 cases in Goa. Inter-State movement was allowed without precautions although the neighbouring states and even some countries like UK and Australia had already imposed strict travel restrictions. I blame the government for the pandemic rise,” he said.

Bonifaco, who has also served as TTAG President from 2002-06 has also questioned government’s utter carelessness to come to the rescue of the traders.  He has sought rebate to the industry particularly small traders on lines with relief provided by countries like USA, Australia, Canada, among others.

“Where incentives are to be given, government is not bothered. The hotels are shut. How are they going to pay their license fees and other taxes? So many sectors under the tourism should get a rebate since they have been paying taxes even during the lean season. Moreover, small traders like flower sellers should also get the relief,” he said.

Messais is also of the opinion that relaxation on licenses, power tariff, etc should be considered by the government. “We are not demanding compensation but only relaxation. There should be no payment towards no consumption of services. There are many stakeholders who although are open for operations are in losses,” he said as Shah too supports monetary help for tourism stakeholders.

While we speak about vaccination, here’s an example of a small and world’s most vaccinated country Seychelles once reported spike in cases on reopening its borders for tourism in March-end.  The mandatory quarantine requirement was done away and its previous plan to open for vaccinated travelers was dropped in favour of mandatory PCR testing. This time, the small island nation has barred countries including India with high number of cases among its travelers list.

Goa neither wanted quarantine nor mandatory negative certificate nor has insisted for fully vaccinated travelers’ entry. If not for the High Court, Goa would have continued to allow inter-state movement without RT-PCR negative certificate of not be older than 72 hours from May 10. The Pramod Sawant-led Government’s attempt to tweak the crucial direction of the High Court brutally backfired as it imposed the RT-PCR COVID-19 negative test only certificate for “tourists”.

“Unfortunately the virus does not differentiate between Goan and a non-Goan,” the Bench of Justice M S Sonak and Justice Nitin Sambre had observed forcing the government to amend the order and making the rule compulsory for all.

Bonifaco maintained that absence of restrictions led to increase in cases. While demanding the mandatory negative certificate continue, he also slammed the government for imposing curfew which is nothing less than an eye-wash. He cited example of UK where the government put a lockdown soon after detecting one variant of COVID-19 while several countries observed strict restrictions on the movement. “In Australia, the fine amount for violating lockdown is $200. On the other hand, in Goa, people are roaming. There’s a big queue outside liquor shops every day. Let us be practical and honestly impose restrictions,” he suggested.

“The Chief Minister has to act tough and not allow every panchayat to declare their own lockdowns as per their whims and fancy to make it a political stunt,” he further said.

The sitting President Shah has further added reminding the government to vaccinate all in the tourism sector by treating them as frontline workers. As cases refuse to decline, Shah has asked the government to do away with home quarantine and replace it with government quarantine. He also insisted on vaccination coverage including for 18-44 years of age and RT-PCT negative certificate for entry into the State.