On the occasion of the World Day of Remembrance for Road Traffic Victims, PRATIK PARAB reviews the statistics, the problem areas and what needs to be done to reduce the high number of deaths that occur every year in Goa due to road accidents. A large number of locals suffer serious injuries too, which alters their and their families’ lives forever. Road safety is not only paramount but is also something that shouldn’t be brushed aside without a second thought. Instead, the authorities and the public should look at this with seriousness and clear intent to bring about a much-needed change in order to save lives 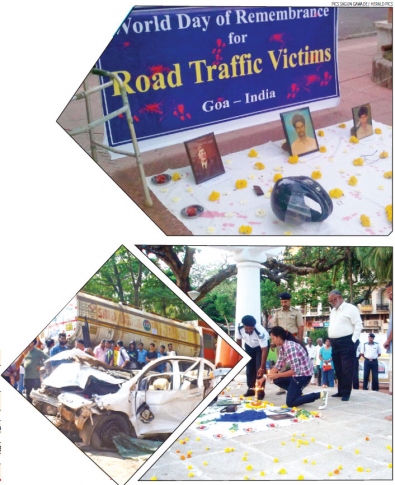 November 15 will mark the World Day of Remembrance for Road Traffic Victims (WDR). While the number of accidents and deaths that take place per year are high, this year,  may appear to be less but that is due to the long extended lockdown. However, even then the accidents that took place during the rest of the year show that there is a lot that needs to be done to improve the current situation.

The statistics show that the highest number of accidents is in localities, which have highways and a lot of tourism. The efforts of the authorities, line agencies, local self government bodies and the State government will play a key role in helping save lives, especially that of young persons, which the State loses in road accidents every year.

The Global Decade on Road Safety is ending in 2020 and there are some goals identified for the Governments and executive agencies for the next 10 years, which will be guiding the agencies and Governments including India. These goals will directly impact the four pillars of Road Safety, which are ‘Engineering’, ‘Education’, ‘Enforcement’, and ‘Emergency Care’. In addition to that, there is a Supreme Court Monitoring Committee on Road Safety, which takes a quarterly review from the Government agencies.

If observed closely the highest numbers of deaths that are reported in Goa are in and around police station jurisdictions which have major highways, heavy, fast-moving traffic, and touristic traffic. For instance, Mapusa in 2019 had 23 deaths and has already touched 15 deaths by the end of October 2020,with two months left to go. Anjuna had 18 deaths in 2019, while there have been 7 so far in 2020. Pernem had 20 deaths in 2019 and has 8 deaths so far in 2020.

In the State, November 15, that is today, will be observed as the Goa Remembrance Week for Road Traffic Victims with a focus on the increasing number of deaths and grievous injuries due to road accidents in Goa.

GOACAN through its ‘Road Safety & Traffic Management Campaign’ has been observing the World Day of Remembrance since 2009.

Its convenor Roland Martins has written to and coordinated activities for traffic safety. "This Global Day of Remembrance of Road Accident Deaths is an opportunity to look back at what has happened, how and why it happened. Now there is a Supreme Court Monitoring Committee on Road Safety and now the Committee takes a quarterly review on road safety. Now, we can't look away from the accidental deaths as there are a large number of young lives being lost due to the accidents" said Roland.

The Chimbel tanker crashing into several persons killing one and injuring another 8 persons completed 1 year on November 14. Citing the Chimbel accident, GOACAN said that since the road is always a hotspot of accidents the accident could be avoided.

Roland said, "The Road Safety Committee at the local level in the village and urban areas is a game-changer, which will help the implementation of rules at the village level. Various points of view through the committee members which consists of businessmen, teachers, senior citizens, women, and others" said GOACAN.

Adv Moses Pinto from Margao who has done considerable research in this matter, said, "In choosing to observe November 15 as an appropriate acknowledgment for the vulnerable road users who became the victims of road traffic crashes; the most important lesson that the authorities, functionaries, planners, leaders, and activists can take away from the day’s observance is the profoundly negative impact that the fatality has incurred on the family members of the victim. The endeavor should be to prevent a similar fate from being faced by the next generation of vulnerable road users.”

"It could be illustrated that a father whose limbs have been amputated due to a road crash involving his two-wheeler while he was on the commute of returning home, would not want his child to grow up and face the same risks on the road when his next generation takes to using the road for their further studies or to reach their workplace. He certainly would wish for safer transportation systems, which would drastically reduce the uncertainty of traveling on the road and make a safe arrival more predictable," he added.

Moses further stated that one of the ways that the victims can be honoured is by learning the effects that the fatality has had on the victims family and pledging to ensure that a similar fate shall not be faced by the rest of the surviving family members who also would be expected to use the same road in their lifetime.

"Preservation of future generations’ interest in using the road should serve as a guiding factor for present decision making and planning of road safety regulations and road engineering, “he added.

Moses also pointed out that the Novel Coronavirus' new social distancing norms are taking the road safety initiatives to a backward setting as the majority of the public are taking to private vehicles instead of public transport.

In the Goan context, there is a fear that the number of road crashes could increase due to this trend.

“Secondly, the vehicles including both two-wheelers and four-wheelers could have been neglected of their general maintenance that has to be ordinarily carried out such as servicing at regular intervals, tire pressure check, and tread wear check, and other factors,” Moses added.

Given that one of the four pillars of the Road Safety is Emergency Response, the lesser availability of emergency service vehicles due to the pandemic has impacted the response time in reaching the road accident victims. At several accidents, the people or the persons attending the victims are seen heard complaining that the 108 emergency ambulances reached late. The golden hour after the accident is breached which can result in fatality.

With an increased risk of road crashes during the Coronavirus pandemic, emergency services may be overwhelmed due to limited resources which means slower response time of Ambulances and paramedical staff; shortage of emergency response personnel; overcrowding of the Hospital's Casualty department with emergencies mainly related to Coronavirus; shortage of beds in the Intensive Care Unit (ICU); growing shortage of ventilators and other medical equipment and other factors. "Resultantly, all these factors point out that there is even more reason than usual to drive safely and that includes obeying the speed limits; avoidance of alcohol impaired driving; proper use of safety gear in the form of helmets and restraints such as seat belts, maintaining vehicle distancing of at least two meters; using advance turn signals, observing the pedestrians right of away and others,” Moses added.