The celebration of the World Environment Day on June 5 was observed yet again but River Sal is still dying a slow death every day and the story is the same every year. MARCOS GONSALVES says this river is losing its unique environmental beauty with each passing day. The biodiversity of River Sal is lost forever and the situation has come to a stage where the old glory of the River Sal may never return. 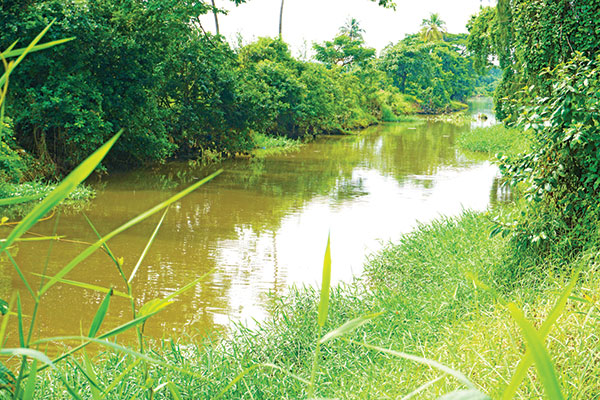 River Sal, once upon a time known as lifeline of Salcete, is short of oxygen. There are hardly any efforts to administer some scientific cocktail into the River Sal to prevent all infections, which have damaged the Sal River very badly down the years.

River Sal, or the Sal River, is a small river located in the Salcete Taluka, District of South Goa. River Sal is the third largest river (35 km) in Goa with the third largest basin (301 km2). The Sal River is a geological and hydrological oddity: it is the only river that follows a north-south direction before meeting the Arabian Sea at Betul. Although its catchment area and runoff (700 million cubic metres per year) is one-third of the Zuari River, it has not received even one-third of the attention which both Mandovi and Zuari rivers have received. However, it is more disturbing is that the manner in which the greenery donning the river banks is being shaved ruthlessly.

On World Environment Day Herald has found out that this river has lost its old glory permanently. Environmentalists and social activists feel that there is a need for 'Green Governance' something that the River Sal has missed out on in the years gone by.

Environmentalist are of opinion that mounting public alarm over mega-housing projects in the proximity of the River Sal disrupting the ecological balance or eco-systemic harmonious relationship in its vicinity demands effective intervention for its Ecological Protection.

Despite efforts from the government, Sal is experiencing a slow death and, therefore, on the verge of utter destruction.

Speaking to Herald citizen of Margao Savio Dias said today the River Sal has degraded from bad to worse and the only reason is the contamination.

"In our childhood days, our River Sal was a unique spot for youth. We used to go there for swimming and fishing. The water was clean and cool. There used to be water rise and water decrease like high and low tide. We used to see a variety of flowers and plants on the bundhs", he recalls.

"Today we see River Sal degraded from bad to worse. The River is clogged and stagnant with raw sewage water and sludge released from the city and markets. The river bed is full of mud and muck", he added.

According to Savio Coutinho, former Chairperson of Margao Municipal Council, on one hand, the Sonsoddo continues to remain as a nightmare and a major pollutant on the North-East of the city, the once beautiful River Sal continues to haunt the South-West of the commercial capital.

"In 2016 nearly Rs 5 crores were spent on the cleaning of the river Sal from Khareband downstream to a length of around 4kms. However, the sources of pollution of River Sal was neither plugged nor any concrete measures taken to contain the official discharge of raw sewage from the chambers of the sewerage network", he stated.

He further said that it is five years since then, but the concerned authorities have not done anything to prevent the raw sewage from entering and polluting the river. Instead, on account of the availability of central funds, the government has embarked upon yet another useless project, which is an eyewash in the guise of cleaning the river Sal. Even more disturbing is the manner in which the greenery donning the river banks are being shaved ruthlessly and low-lying adjoining fields are being filled up with an ulterior motive.

According to Abhijeet Prabhudesai, social activists and environmentalists, from a scientific point of view river is not just a river, river includes its entire catchment area. This river starts from the hills of Verna, Margao, and Cuncolim.

"Urbanisation and even the Sonsoddo is affecting very badly to the River Sal. Dredging and de-silting are nothing but equal to zero. In the real sense, it is all meaningless", he stated. 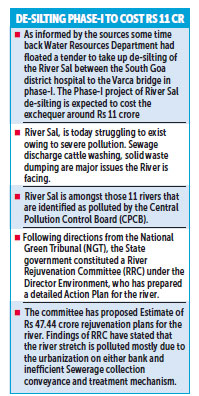 The Verna and Cuncolim Industrial Estates, besides sewage flowing from Margao, Navelim, and other areas need to be stopped.

His apprehension is that the few efforts from the government side are maybe for wrong reasons. "This project of dredging and de-silting of river Sal are maybe to exploit river or to misuse the nature. The government efforts are implemented by hiding ulterior motives from the public", he alleged.

Co-ordinator of GOACAN Roland Martins said that the river being de-silted in its present state must be a people movement which requires regular monitoring from all the villages along its banks. The Biodiversity Management Committee (BMC), the Village Water and Sanitation Committee (VWSC) and the Village the Development Committee (VDC) of every Panchayat will need to take the lead in this vigilance.

"The rejuvenation of River Sal has come after it was classified in the most polluted category III and the National Green Tribunal issued directions for its de-silting. The project costing an estimated Rs 60 crores covering the entire stretch of the River will require the contractor to maintain it for three years", he informed. 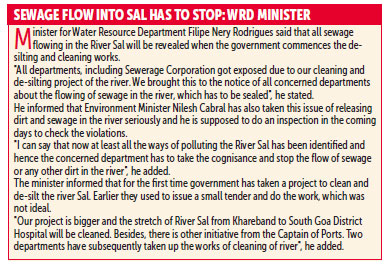 As a human being faced with addiction needs to go through detoxification in the first phase, the subsequent hand-holding by the family is required so that he builds his willpower to remain free from addiction; this is what the River Sal will need, he added.

"Just a de-silting contract alone will not be sufficient; River Sal must become a river of the people of Salcete Taluka.

A sense of ownership has to set in and what better day for this to start", he stated.