Goa has witnessed one of its heaviest rains and one of the victims of these harsh weather conditions has been the local farmers. With their fields inundated with water, there is little hope of them securing a good harvest. More so, because saltwater intrusion that has come from broken and breached bunds has offered no protection and has only made the situation worse. Water level rising during the high tide, which has often led to floods, has only compounded their problems. After speaking to experts in the field, PRATIK PARAB arrived at a common consensus that a cross-sectoral approach is required to bring about proper coastal management that can minimise the loss of Khazan lands in Goa 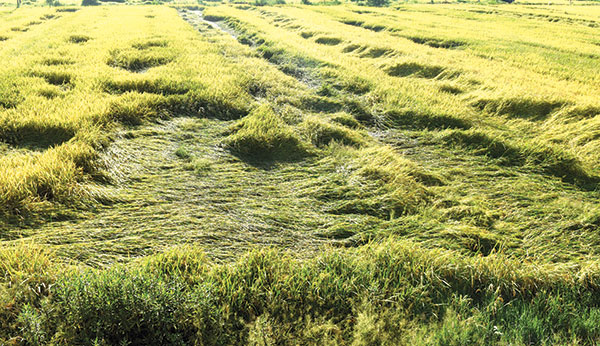 The absence of a cross-sectoral approach to bring about proper coastal management has resulted in Goa losing its unique Khazan lands and cultivation within them. Reliable studies have shown that almost all the bunds of Goa, which are a natural mechanism to control the saline water influx into interior low-lying areas, have got destroyed. While the State stares at a bleak future for the Khazan cultivation, the Government however seems to be more interested in pushing the revival of mining for Goa.

Phila Antao, a farmer from Betalbatim, who cultivates at least seven fields, said that the other farmers in her village are not as lucky as she is.

“They may have to miss the Rabi season of paddy as a bund that controls the water into the Kharo Khazan and Datali bund got breached and the fields were damaged due to incessant rains.

Goa has at least 16 thousand hectares of land under Khazan lands. Khazan cultivation is unique to Goa. In the olden times, the Portuguese had scientifically conceived the Khazan lands for both cultivations of paddy and Aquaculture, pisciculture, and fish.

An example of which can be seen today at Raitollem where both, paddy cultivation, horticulture, and fish culture is practiced.

There was a time in Goa when these Khazan lands would employ at least 700 or 800 persons from villages around. The Asgo and Korgut variety of paddy has tolerance for salinity and can grow in khazan lands.

There has also been some positive news from the areas of Neura, Dongri and adjoining Khazans wherein, after decades, there has been a successful attempt to grow paddy. Importantly, the youth have taken interest in the paddy cultivation and revival of the khazans. However, today almost all the bunds which were built during the Portuguese-era and later have been destroyed. The state of the largest Khazan cover the land in Carambolim, which is an agrobiodiversity hotspot, is today precarious as there is an inundation of saline water into the low-lying lands, which have a glorious past of paddy cultivation and aquaculture, which worked in synergy.

Reports suggest that the people who live near khazan lands and have a history of tilling have expressed willingness to get back to paddy in these fields. With little mechanization and Government support, the lands can be revived to their glorious past.

Dr Antonio Mascarenhas, former Scientist at NIO Goa said "There needs to be a cross-sectoral approach and that is what coastal management is about. Today, it is simply not happening.”

The old science of bund management looks to be missing today.

Dr Antonio added, "The flooding of saline water in the fields has two parts. There is the natural reason and there is the deliberate breaching of the bunds to flood the wetlands and fields to undertake the fish culture.”

This has resulted in bringing in mangrove seeds, which germinate during low tide. Mangroves in Goa have risen by 400% but Dr Antonio said that they are growing where they should not.

This invasion of mangroves has resulted in a lot of cultivable land being lost.

Farmers from Salcete village have been facing the problems of breached bunds and invasion of saline water into the fields. Farmers from Betalbatim have been facing this problem for the last 3 years. Phila Antao said that for the last 3 years, the farmers have faced losses due to saline water entering into their fields. "Bandh of the Kharo Khazan has breached and the farmers have faced downtime in Rabi season," she added,

J Santano Fernandes while speaking on the issue said that under the Curtorim Biodiversity Management Committee had submitted a report for the protection of the Khazans and asked for classifying them as Biodiversity Heritage Sites. The Former Minister for Environment and Forests Rajendra Arlekar had praised the Biodiversity Committee of Curtorim for taking an initiative to declare sites as heritage sites. However, the delay in the declaration has resulted in the loss of agriculture land in Curtorim and today is occupied by mangroves.

J Santano added, "Every department works individually and is busy in one-upmanship. Even after submitting reports to the relevant departments there is no hope that the Khazans of Curtorim may ultimately be protected."

He added that many departments have indulged in putting a spoke in the process, which actually should have been done by them.

Curtorim the granary of Salcete has at least 7 Khazan lands and is situated on the banks of river Zuari. Indiscriminate sand extraction across the river line has also threatened the traditional bunds and mechanisms, which help in the use of Khazan lands for various activities mainly cultivation.

The bottom line is that the Government, which is expected to say show efforts to revive agriculture and help it flourish for the people, is running after reviving the mining business, which they say is the mainstay. The people have to realize that agriculture is here to stay, it was there before, during, and will be there after mining.

Farmers from mining areas like Varad Samant and others is an example of how agriculture has come to the rescue of the mining affected people from the locales of Codli-Dabal, which were once the hotbeds of mining businesses.