Sanjivani: A sweet to bitter journey

In mythology, the name Sanjivani is associated with a life-saving herb. But in real life, a defunct sugar factory in Goa bearing the same name, has spelt doom for the hundreds of workers and sugarcane farmers, transporters and others dependent on this factory. PRATIK PARAB reveals how government mismanagement has left lives in disarray 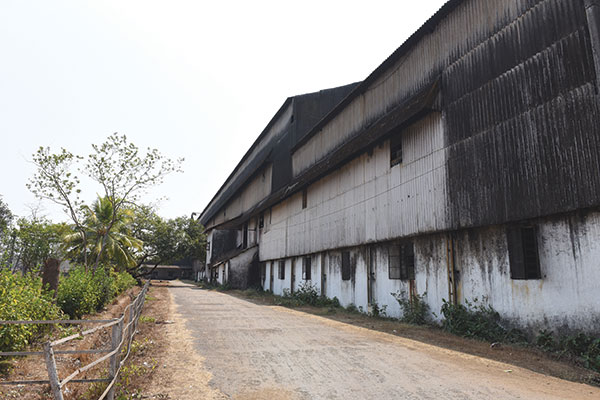 The only sugar factory in the State stopped crushing sugarcane for almost three years due to mechanical problems and shortage of sugarcane and today it has turned into a white elephant with continued government apathy and neglect.

The government has given only mixed signals on whether the factory will be re-opened or not but has promised to restart it, but the process so far has been sluggish which has confused the sugarcane producers.

A series of wrong moves by the Government of Goa jeopardised the ‘Sanjivani’ and the factory finally was shut down. To understand the strategic apathy, that the sugarcane plant and farmers faced, one has to delve into the past and understand the decisions that have led to the present state of the sugarcane cultivation in Goa.

In 1968, Sanjivani Horticulturists Cooperative Society was established aiming for promotion of sugarcane crop in Goa alongside other crops. It was in the year 1973, the Government of Goa under the leadership of the then Chief Minister late Dayanand (Bhausaheb) Bandodkar set up the Sanjivani Sahakari Sakhar Karkhana (Sugar Factory) at Dharbandora in South Goa.

By 1979, the area under cultivation of sugarcane had increased. The factory received 55,000 tonnes of cane in 1977-78 compared to 13,532 that was produced in the year 1973-74, which was the trial season during the commissioning of the sugarcane crushing plant.

The first season immediately after the commencement of crushing cane in 1974-75 saw 31,227 tonnes of cane being harvested from the plantations of Goa. There were 63 registered Taluka Farmers Service Cooperative Societies spread across 10 talukas of Goa.

The Government of Goa Daman and Diu through its Local Administration and Welfare Department under the Registrar of Cooperative Societies provided loans and support for improvement and promotion of sugarcane cultivation in Goa. Various societies working in the field of agriculture and moreover in the sugarcane front were amalgamated and reorganized into a single society.

The factory and sugarcane cultivation in Goa was at its peak in the 90’s. However, the government took over the factory in 1996 after it started incurring losses. Sanjivani Sahakari Sakhar Kharkhana (SSSK) Ltd, Goa was running the show until then with Former Chief Minister Pratapsingh Rane as the Chairman. The losses of the Sanjivani factory continued to mount despite being taken over by the government.

At the time when the Government took over Sanjivani, the factory had incurred Rs 8 crore in losses. The Government took over the plant in 1996 as a measure to contain the losses. Now, after 26 years, the losses have mounted to a whopping Rs 120 crore. The sugarcane crushing plant is redundant, the land has been plundered and the farmers have quit sugarcane cultivation.

In 2020 the government announced to shut the operation of the sugar factory and production dropped to 26,282.61 tonnes, which was cultivated on 664.17 ha with engagement of 784 farmers.

In the year 2020, the Government decided to transfer the Sanjivani sugar factory from Cooperative Department to Agriculture Department.

The biggest sugarcane producer of Sanguem taluka, Harshad Prabhudesai said, “Without any prior intimation, the government shut down the plant in 2019. Now it is taking independent decisions without taking any of the farmers and office bearers into confidence.”

“The factory did not incur such big losses when it was being operated and managed by the Cooperative Society,” Prabhudesai said.

“According to the bye laws, the right to take decisions on behalf of the factory lies with the cooperative society. However, the society was never taken into confidence,” he added.

When the plant was being run by a farmer's cooperative the entire responsibility of cultivation, harvest and production was borne by them. However, after the government took over the plant in 1996, the government rules conflicted with the set procedure which was the first drawback. The government made a big mistake by taking it under its stride. “Sugar mills, factories will never succeed under Government operation. It is a sector which has to be run under cooperative or by outsourcing,” he said.

He said that the Government undoubtedly had their eyes set on the large tracts of land that the cooperative owned.

“The Government has given up precious land that belongs to Sanjivani Sugar Cooperative. What kind of cooperative is this where the farmers are not taken into confidence at all?” the sugarcane farmer  questioned.

“The Government strategy to usurp the Sanjivani land has been exposed. To avoid criticism and opposition, the government covertly let the plant die and the farmers quit the cultivation so that they could take away the land that was meant for the sugar cooperative,” another sugarcane farmer Chandan Unandkar alleged.

The Sanjivani plant was in fact placed in such a strategic manner that it would never have a lack of water supply and also power supply as there was a high tension line passing through the land. The farmers say that since sugarcane is a cash crop and it could have been a great contributor to the economy of Goa.

However, the Government mismanagement caused severe hardships for sugarcane cultivators. The sugarcane cultivators who were used to immediate cash payment till 2012 were forced to wait for 6 to 7 months for their payments. This agony aggravated to such an extent that the farmers began quitting sugarcane plantation. These moves caused aberrations in the sugarcane farming resulting in slow withdrawal of farmers.

In a bid to bring the loss-making factory to profit, late Chief Minister Manohar Parrikar in 2017 had advocated the need for producing by-products out of sugarcane.

Parrikar had mentioned that by producing by-products, the factory will run well. He had said that there was need to generate ethanol, alcohol, biomass, biogas from sugarcane waste.

He had asked the officials, then, to prepare a financial roadmap and to prepare points how this factory will come in profit.

Union Minister Nitin Gadkari during the Assembly election campaign in 2017 had stressed the need to generate fuel from farm products. He had said that the alternate fuel can be generated from rice straw, wheat straw, cotton straw and sugarcane bagasse.

This aroused hope amongst sugarcane farmers that the factory would grow and they would get good opportunities to sell their produce. But, it all came down crashing in 2019 after the State government abruptly shut down the plant.

Along with the closure of the Sanjivani plant, several cooperative societies from villages that lend money to the farmers are also staring at a total closure. Office bearer of Curdi Sahakari Society Ayetin Mascarenhas said, “Our society would give loans to farmers in order to develop and boost production of sugarcane. But due to the closure of the factory, we may have to shut down soon as there is no economic activity.”

In fact there is nothing on record to ascertain that the Government is taking steps to improve the sugarcane production in Goa.

“If the Government is serious in starting the Ethanol plant the agriculture department was expected to create awareness among the farmers of all the talukas having sugarcane cultivation. There is no awareness being done,” Mascarenhas added.

Coming to the present state of the Sanjivani, hardly 800 farmers have remained in the sugarcane cultivation and are reducing rapidly. Some farmers have taken up jaggery production locally as there are no takers for sugarcane in Goa.

A farmer informed that sending sugarcane to Karnataka is unaffordable as the entire earning would be spent on transportation. According to the farmers, the production won’t go beyond 12,000 tonnes this year.

Narendra Sawaikar, chairman of Sugarcane Farmers Facilitation Committee and former South Goa MP, speaking to a news agency recently said that Request for Quotation (RFQ) has been invited to set up an ethanol production plant at Dharbandora. "After this whole procedure gets complete, we will come to know the exact picture,” he was quoted as saying.

What remains is that the 15 lakh sq m land of the Sanjivani factory lies plundered. Two illegal stone quarries spread out in 5 acres of land have made a fortune from the Sanjvani land.

Between 2019 and 2022, Government gave land of Sanjivani plant to private entities, including 35000 sq m land to a college run by the trust of MLA Ganesh Gaonkar and large tracts of lands to private institutes, while watching the number of sugarcane cultivators dwindle.

“The cooperative farmers had officially complained to the government. However, no action was taken,” he informed.

While the stakeholders continue to wonder about their future, there is no doubt that the closure of the factory by government has certainly left a bitter taste in everybody’s mouth.