Save our sandy shores

Coastal erosion and climate change have already started to show their effect on Goan beaches. The fishermen and locals who live near these beaches along with scientists warn that today’s ripples could lead to a wave of destruction in the future where we not only face the risk of seeing such sand stretches reduced, but also witness a big part of Goa’s identity being washed away. Those concerned about the environment feel there has to be an immediate change in policy guided by scientific inputs if the recent trends are to be reversed and the gradual degradation of beaches can be stopped. KARSTEN MIRANDA reports 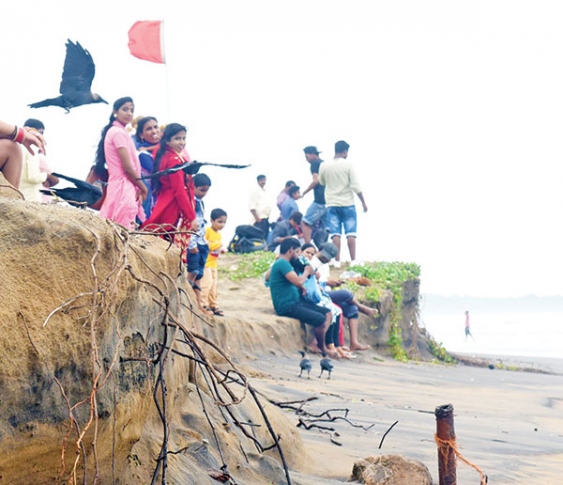 According to a recent technical report based on satellite mapping that was carried out by the National Centre for Coastal Research (NCCR) under the Union Ministry of Earth Sciences, 19% of Goa’s coastline underwent sea erosion between 1990 and 2018.

This data was part of a national report that stated that 32% of India’s coastline underwent sea erosion during that period. West Bengal led the States in that table.

The information was tabled by the Central Government in the Lok Sabha August 10, 2021.

The Centre further revealed that 98 coastal pockets of the country have been facing sea erosion, three of which are located in Goa. Andhra Pradesh led this table.

According to NCCR, these stretches of India’s shoreline are subject to varying degrees of erosion due to natural causes or anthropogenic activities. NCCR warned that the coastal erosion has impacted coastal communities residing in the erosion prone areas, including fishermen communities.

The Ministry further pointed out that only 52% of Goa’s shoreline is stable, although Goa leads this table.

The Ministry cited wave energy, climate change, strong littoral drift, construction dams in catchment areas, sand and coral mining and dredging are some of the reasons that have led to shoreline erosion in the country.

What’s happening in the rest of India holds true for Goa too.

According to experts, developmental activities have been carried out without properly understanding the coastal dynamics, leading to long-term damage, particularly to local communities.

“This is not the first time such alarming statistics have been raised in parliament. In 2014, the then Rajya Sabha MP (late) Shantaram Naik had shared in the House how 21 beaches of Goa’s 105 km-long coastline had been affected by erosion. What has happened today? Nothing!” said Raju Mandrekar from Pernem, who has filed complaints with the State government regarding sand erosion.

For perspective, in the year 2012, the then Tourism Minister Dilip Parulekar had announced that the Centre had allocated Rs 50 crore 'to save Goa's beaches from erosion'.

At that time, a report tabled by the Water Resources Department (WRD) in the Goa Legislative assembly, 25.02 kms of Goa's coastline was severely affected by sea erosion.

The beach stretches coming under Pernem, Bardez, Tiswadi, Quepem, Canacona and Salcete talukas were amongst those affected and the State government had then allocated Rs 30 crores ‘to restore the coast’.

Fast forward to 2017, the then WRD Minister Vinod Palyekar had said that 10 kms of the overall coastline that had faced erosion were critically damaged. Belatalbatim (1,320 m), Arrosim (1,190 m), Agonda (1,000 m) and Keri-Tiracol (1,000 m) were some of the beach stretches that had witnessed erosion, as per that report.

Today, according to WRD, measures such as stepped sea walls, concrete blocks, earthen and sand bag embankments, geo-tubes and others have been taken up at various beaches.

However, experts believe that these measures have led to further degradation of the beach and that unchecked development like the construction of a concrete wall at Vainguinim beach will only cause more damage to the beach, effects of which are already visible.

“At Querim in Goa, a 300 metre long rubble wall was fixed in 2008, and tripods laid in 2010, blaming coastal erosion; in 2012, 2013, 2015, 2019, 2020 the beach in front disappeared completely, confirmed from satellite images; the strip has become overtly dynamic,” said Antonio Mascarenhas, former scientist at the National Institute of Oceanography (NIO).

“At Campal, a laterite boulder wall was erected a decade ago to tackle erosion; the narrow beach has vanished,” he added, while citing similar instances where beaches have been detrimentally affected across the Indian coast, not just in Goa.

In his opinion, sandy beaches belong to the ocean and that it is where the waves break and the sea comes to rest. He explained that sea waves that rush towards the beach must get attenuated or nullified all by themselves without any hindrances.

“Here, the beach width, dune height and vegetation density play an inherent defensive role. As such, if the incoming wave encounters a hard obstacle, such as a vertical concrete wall, before its energy gets neutralised, consequences on the adjacent beach can be dramatic. Since powerful waves break on the hard wall, reflected waves are created, thus resulting in high energy turbulence and a ‘confused sea’, a condition highly damaging to the stability of beaches,” Antonio added.

Another scientist, Baban Ingole, who is associated with the National Centre for Polar & Ocean Research Goa concurred with the views expressed by Mascarenhas.

He blamed constructions near the beaches or river beds which displace the accumulation of water and have negative consequences at some other low-lying areas, which has also led to sand erosion.

“There was a time when we had beautiful beaches. This is before all these developments in the name of tourism. Now look at the beaches. In some places like Morjim and Galgibaga, the habitat of turtle nesting sites too have been affected,” he added.

Ingole also referred to the recent reports of NASA projecting how sea levels will rise in Indian coastal regions where Mormugao is facing the danger of being submerged at the end of the century.

He agreed that recent natural calamities like the cyclones along with rough sea conditions led to the washing away or uprooting of a large number of casuarinas, palm trees and other beach foliage/vegetation that would dot the shorelines.

“You can plant a tree; it will grow maybe in 50, 100 years. But you can’t grow a beach. Once it’s gone, it’s gone as the conditions that led to the beach erosion will prevent the beach from being replenished,” Ingole added.

Locals who live by the beach like the fishermen feel that there have been changes in the sea such as its temperature as compared to how it was earlier.

“We have been walking and working on these beaches for generations. During the monsoon, it was common to see water passing through the sand or the shape of the beach changing a bit but it would go back to normal later in the year. But now in the last few years the changes have been more permanent in nature and all negative. Shoreline is receding. On top of it you find tar balls on the beaches,” said Constancio Pinto, a fisherman from St Andre.

“The amount of rainfall has also increased tremendously over the past few years. The usual places where the water would accumulate have gone as low-lying areas have been filled up. Where will this water go? I believe this has had some impact. There used to be small patches of water in the middle of the beach that we could jump over. Now they are like big ponds and you have to either walk through it or around it,” said Rebecca Misquita, a conservationist from Salcete.

Residents who live near the beaches believe that man-made destruction of sand dunes, which used to work as the last barrier against sand erosion has also led to the type of devastation that one can see today and they felt that the worst is yet to come.

As per a report prepared by the National Centre for Sustainable Coastal Management (NCSCM), Chennai, the major causes of degradation and destruction of sand dunes of Goa have are construction of hotels, resorts, guesthouses, then dune reclamation for making approach road to the beaches, landscaping or beautification of frontal dune and other tourist activities. The report also states that the installation of shore protection measures such as seawalls also contribute significantly either for alteration or destruction of sand dunes, something the scientists in Goa have lamented about.

They have also batted for the immediate need to restore these sand dunes, which they felt is imperative along with a thorough plan to ensure that they are conserved given the significant role sand dunes have in protecting the beaches from oceanic forces. 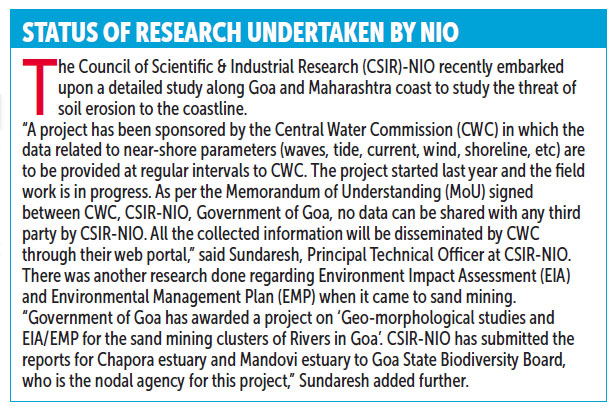 “The biggest solution is a strong adherence to the Coastal Regulation Zone (CRZ) rules in the State. Constructions should not be allowed within 500 metres. What is 500 metres today will be 200 metres in years to come given the shoreline erosion, rise in sea levels... all effects of climate change. There cannot be bad precedents set as otherwise tomorrow you will have more such violations like concrete walls built in other beaches that have already suffered enough damage. Irresponsible actions have already led to such negative changes. There has to be a change in mindset not just with the administration but amongst the public too for there to be any real positive change in the future,” Ingole added further.

Mascarenhas listed out some suggestions that can offer solutions without any side effects.

“Sand nourishment, replenishment of eroded beaches needs to be a routine exercise. Promoting the growth of dune creepers as ‘ipomoea’ is imperative as these plants bind sand. Emplacement of sand fences along the frontal dune line is imperative to curtail trespass, avoid trampling of vegetation and ‘trap eolian’ sand. Purely temporary structures, if any, should be located on the dry beach only. Retreat from an affected coast to a safe distance inland needs introspection. Coastal shelter belts in the form of buffer wooded bio-zones that nullify inundations need to be designated by law,” said Mascarenhas while giving some of the examples of what can be done.