She rhymes, she raps and has set her own path in Goa’s music scene

Fresh from the release of her original 'Who's Gonna Love Anyway', this time, Goa’s only female rapper, Sharlaine Menezes from Margao has teamed up with Shikha Lagali from Nagoa to come out with a song ‘Rise’ that was produced by fellow Goan Morrison Barreto during the pandemic. She speaks to KARSTEN MIRANDA about her interesting and unique journey 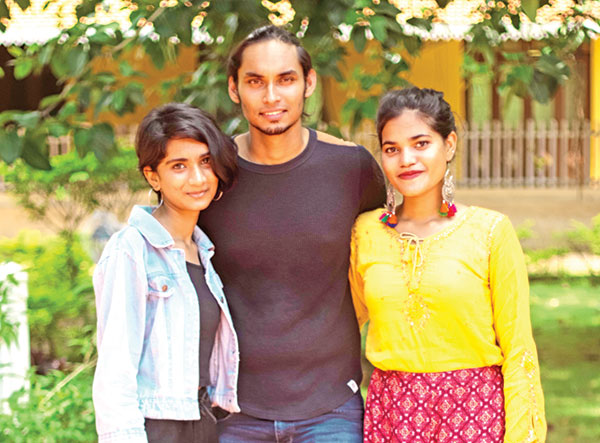 The young Sharlaine Menezes has taken many by surprise by choosing to rap when she had all the tools to master classical music. Instead, she decided to create her own music at a time when budding artistes usually start off by attempting covers or soulful renditions of popular songs. Especially, when there are hardly any female rappers in Goa; at least those who compose their own lyrics.

By doing so, she has carved a reputation for herself and has also come out with tracks like ‘Hush Baby, Going Back’.

“Toughness in Soul, Not about that Muscle. This is what we do, It's the Real Hustle!” is one such verse of one of her raps.

But even in the Rap genre, Sharlaine has chosen yet again to try and be different from the rest. Certainly not one to fit into stereotypes and definitely not one to follow the well-trodden path; Sharlaine is all about her music and the message it sends as opposed to simply conforming to the norm.  For instance, she is the daughter of one of Goa’s most celebrated violin virtuoso, Selywn Menezes, and was recently seen singing gospel music with her family in an Instagram Live session; an indication that she can easily perform various types of musical genres and styles. She has also worked with the eclectic ‘Six Strings Productions’ this year.

So how did it all begin?

“I got into music at the age of 4, bagging a prize for a singing competition at Clube Harmonia and then a Portuguese track for All India Radio. My dad, who's a musician himself, always put me up for music lessons and classes. I began to feel the pressure, being his daughter and keeping up to his name. It got to a point where I stopped music completely for three years. In Grade 12, I accidentally got into rapping and people began asking for more. By the time I reached college, I'd won a couple of rap/singing competitions. Last year, I had the opportunity to perform live with Georgie Dias in Assam, for the Northeast Futsal League. That's where I actually took off. I began performing at various functions in hotels and open mics. Came out with my first single in December 2019 and then it kept going,” she adds.

“I am proud to say that I am by far the only known female rapper in Goa with multiple original tracks, out in leading platforms. It is difficult for me to produce a lot as I also work with other projects apart from music and of course, I’m asthmatic, so I've got to learn to breathe more before I rap. That being said, I really hope I can inspire many Goan youth especially the women to rise. We need more female rappers!” she says.

Presently, her goal is to work with as many local artistes as she can in Goa as well as India, to create fusion tracks. And that’s exactly what she has just accomplished.

This latest song, a collaborative effort includes vocals in Hindi and rap in English and they pulled it off even though she had exams she had to prepare for.

For this, she reteamed up with the UK-based producer Morrison Barreto, who is an ex student of Don Bosco College, Goa. Having worked with him on her debut track, 'Who's Gonna Love Anyway', they decided to try something different.

They roped in Nagoa-based Shikha Lagali for their new single ‘Rise’, who adds the touch of Hindi. They hope it can be an anthem in a year, where everything looks bleak and also inspire youth in music to create more original content.

“We were busy preparing for our final semester exams and looking at future ventures. While doing so, we found ourselves being stuck between life in this pandemic and our goals, as the exams kept getting postponed. We knew the world was being pushed over and yet tried to see the positive. Coordinating only over the phone, we managed to get vocals and music in place and began the journey to ‘Rise Above’,” Sharlaine recalls.

“Weeks after Morrison came back to Goa; we decided to come out with a video for the same through the harsh weather and pandemic. Thanks to the people who made this happen, namely - Jeruel Paul, Enoch Dias, Russel Barreto,Shreeya Kudchadkar, and Sheniah Menezes,” she adds.

On a future note, Sharlaine elaborates on the general perception of Rap music in Goa and all that is happening in that sphere.

“I’ve heard a lot of the ‘latest’ or ‘modern’ songs and I love the beats and tunes. However, what puts me off is the lyrics and idea that usually revolves around love, sex or heartbreaks. This restrains me from also playing them while around elders. My aim is to create songs that actually revolve around life or reality while using the pumping beats. I want people to understand that our generation is not all about ‘noise’ as music,” she says.

“As a Rap artiste, I do not want to limit myself to the typical 'hip hop' style of music. I want to branch out into all the genres. With 'RISE', it is a unique combination of a Hindi melody, pop EDM beat and Rap. I may not create the ‘best music, but I do know what I make is different,” she concludes.