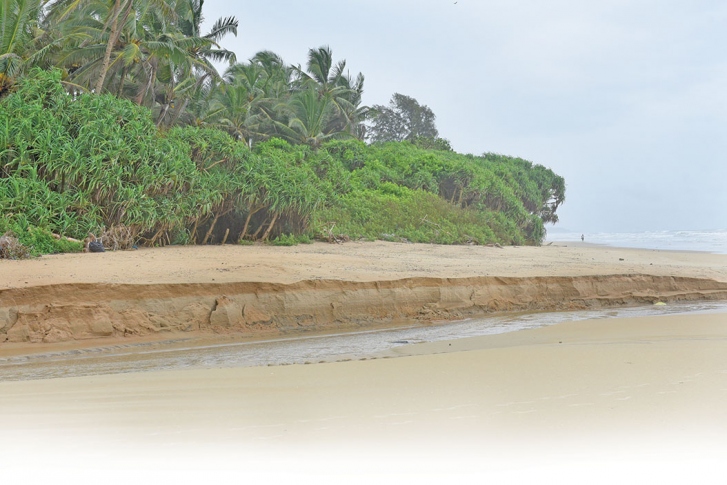 Once considered pristine, Goa’s coast has seen large-scale changes in its geological and ecological set up over the years, all thanks to tourism and its associated infrastructure requirements, large-scale constructions, and haphazard growth. Sand dune ecosystems, which are over 6,000 years old, have borne the maximum brunt of this “development”.

Nature's line of defence from the forces of the ocean, cyclones and tsunamis, dunes also double up as sand banks, maintaining the dynamic equilibrium of the beach. Experts feel that it is high time the government laid its emphasis on conservation and restoration of these beach dunes to protect Goa’s 105 sq km-long coast.

Several studies by the National Institute of Oceanography (NIO) and the National Centre for Sustainable Coastal Management (NCSCM) have revealed that development and tourism activities have led to destruction and degradation of sand dunes along the coastal belts. The damage is most prominent along the coastal stretches of Betul to Cansaulim in South Goa and Sinquerium to Baga, Arambol, and in the middle of Morjim in North Goa.

“Time and again, we have reiterated that the coast of Goa is under assault. Tourism and related human activities are a major cause. Several coastal areas have changed from virtual wilderness in 1970’s to haphazardly developed stretches, full of concrete buildings and related structures, in the last 30 years. The Baga-Candolim coast is a classic example of frenzied development,” former NIO scientist Antonio Mascarenhas said.

The Coastal Regulation Zone 2011 declared sand dunes as CRZ I(A) areas, which are ecologically sensitive. It also mandated restricted development activities along the

Mascarenhas explained that the dune environment is classified as fragile, sensitive, and vulnerable due to its propensity for changes under even slight environmental stress. “Despite that, its onslaught continues with authorities like the Goa Coastal Zone Management Authority (GCZMA) least bothered,” he said.

AgneloBarreto, member of the citizens’ group, Calangute Constituency Forum (CCF), said that several roads laid perpendicular to the coast and across dune belts in Calangute have severely altered, razed, levelled and eliminated a large number of dunes He also said that for construction of various tourism facilities like toilets and parking lots, sand dunes

“Recently, there have been three cases of sand dune destruction in Candolim as well as in Calangute. The GCZMA, which grants permissions for temporary structures, is least bothered to check whether the applicant sets up temporary or permanent concrete structures,” he said. “There are far better ways to promote tourism while also protecting and conserving ecology.”

The Comptroller Auditor General (CAG), in its recent report, observed that despite the existence of sand dunes, the GCZMA gave permissions for infrastructure development and construction of hotels and residential houses along vulnerable beach stretches.

Citing an example, the CAG observed that the construction of the four-lane National Highway 17-B from Varunapuri to Sada Junction near Baina Beach was recommended by the authority in 2015 despite observations of the site inspection team that Baina beach contained sand dunes covered with vegetation, and that it was prone to annual cycles of erosion which made it ecologically sensitive.

Against the backdrop of the state government celebrating the Centre’s approval of the Coastal Zone Management Plan (CZMP) for Goa, the worst fears of environmentalists have come true as the GCZMA has now claimed that there were no sand dunes on Sernabatim beach.

Ironically, the GCZMA had itself ordered the restoration of a sand dune on that very beach in the past, but now insists there aren’t any, paving the way for commercial developments on the beach.

The recent notification issued by the Union ministry of environment, forest and climate change was met with scepticism by various green activists who claimed that lakhs of square metres of sand dunes were missing from the CZMP that was approved for Goa despite the same having been verified during the ground-truthing exercise.

While the state government promised to approach the Centre about including the sand dunes that were verified in the GCZMA’s ground-truthing exercise, a case has already emerged where the GCZMA had asked the National Green Tribunal (NGT) to dismiss a petition based on its claim that no sand dunes exist on Sernabatim beach.

The Colva Civic and Consumer Forum (CCCF) has raised objections to the approvals granted by the GCZMA to a private company for the construction of cottages and other structures on the Sernabatim coast. It has pointed out that there are reports from 2009, 2014 and 2020 that confirmed the presence of sand dunes on the beach. Two expert members of the GCZMA had also confirmed the existence of sand dunes on Sernabatim, it claimed.

In fact, the forum has gone a step further and provided documentary evidence from the past that not only confirms the existence of sand dunes but also underscores the fact that they are continuous.

There was light at the end of the tunnel for the CCCF when the NGT set aside two prior orders of the GCZMA on the grounds that they were in violation of the authority’s own policy on the Beach Carrying Capacity (BCC).

“In view of the policy laid down by the GCZMA through its minutes dated November 15, 2016, it is clear that the GCZMA has decided not to allow any further construction of huts etc in the survey number in question and yet has proceeded to allow the said construction, which appears to be in violation of the said policy,” the NGT’s Pune bench stated.

“Keeping in view the precautionary principle, we are also of the view that no such construction should have been allowed by the GCZMA in the said area without clearly mentioning as to whether the permission granted of the said construction would fall within the beach carrying capacity or not,” NGT added.

Environmentalists now fear that they will have to challenge the CZMP as there could otherwise be similar cases where sand dunes across beaches in Goa will be shown as non-existent and approvals will then be granted for projects on these beaches.

Local residents of Velsao had recently protested against the construction of a road in a no-development zone (NDZ) area that was allegedly destroying sand dunes there, too. They had demanded that the work near the beach be stopped, and had vowed to remain vigilant if there were further attempts to construct that road near the beach.

The locals also approached various authorities over the issue.

These are incidentally the areas where the fishing community, in particular, suffered during the recent cyclones. They had stressed that it was the sand dunes that offered them protection. Traditional fishermen also pointed out that the state tourism department had done a BCC study and had recommended protecting the rights and livelihoods of the fishing community.

Earlier this year, the GCZMA confirmed that a total area of 1,100 square metres of sand dunes had been damaged by the proponent of a hotel at Cavelossim.

The authority had been asked by the NGT to file a report after local residents and environmentalists approached the tribunal.

"The sand dune indicated on the draft CZMP has been cut by the project proponent for construction/ widening of the approach road and public beach access,” the GCZMA had stated in that report.

This was not the first time that the NGT had to be involved in matters concerning sand dunes at Cavelossim. In the past, it had directed the state government to take immediate remedial measures for the restoration and regeneration of the sand dune ecosystem and riverside areas in Cavelossim.

This was based on a petition by the Cavelossim Village Forum against destruction of sand dunes. However, while the environment department celebrated World Environment Day in the village after supposedly having adhered to the directions of the NGT, environmentalists had maintained that work was incomplete. They had a bigger concern. How where the authorities themselves granting permissions for constructions in the vicinity of sand dunes; violations that are only stopped when locals approach the green courts.