Goa has the country’s highest percentage of men in the 15-49 age group who drink alcohol, with 59%, according to the National Family Health Survey (NFHS)-5. Recent studies from Goa by mental health research and intervention organisation Sangath state that the co-relation of alcohol consumption with intimate partner violence, alcohol-related fights, legal issues and workplace issues lead to stigma around Alcohol Use Disorders (AUDs), posing as a major obstacle in the way of accessing physical and mental health intervention, reports SHASHWAT GUPTA RAY 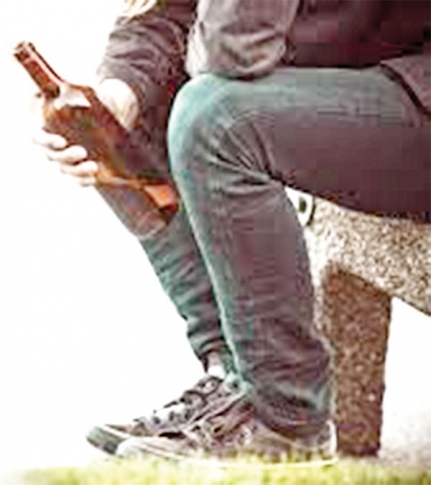 Stigma towards alcohol use disorders is prevalent in India and can lead to social exclusion and hamper treatment access and outcomes. Family members of individuals with dependent drinking are often their primary caregivers and play a key role in decisions around help-seeking, treatment and recovery. The nature and role of stigma in caregiving, and the consequent burden on family caregivers of those with dependent drinking, has not been qualitatively studied in India. 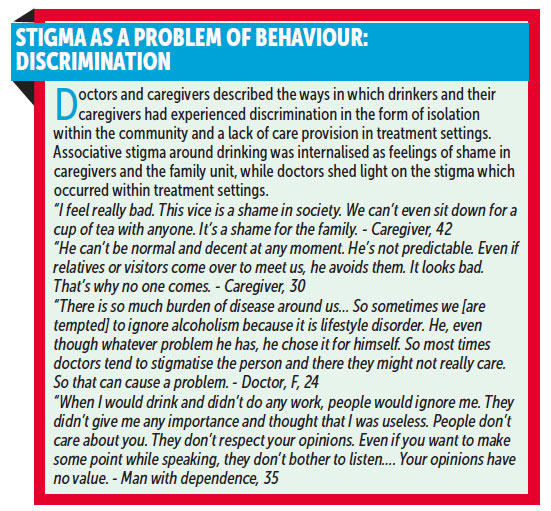 Alcohol use disorders (AUD) are a significant risk factor for a range of adverse health outcomes, reducing the lifespan of those who drink by more than a decade. Dependent drinking is the most severe form of AUD, often characterised by increased tolerance to alcohol, impaired control over drinking, persistent drinking despite harmful consequences and physical withdrawal upon discontinuation. 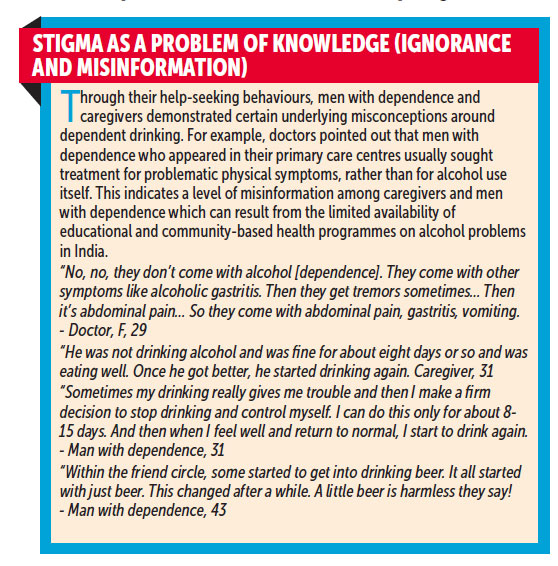 In India, the prevalence of dependent drinking among males aged 15 and over is estimated at 7%, a significantly higher prevalence than the average for the World Health Organization South East Asia Region (2.9%). Individuals with AUDs frequently face stigma and social rejection from their communities. Stigma around alcohol consumption is recognised as a key determinant of social exclusion, particularly in poorer countries.

In India, ‘alcoholism’ is regarded with a high degree of social disapproval, probably because alcohol use is not as common among the general population (India’s lifetime alcohol abstention rate is 79.2%), but is likely to be problematic among those who do drink (17– 26% dependence among current drinkers). 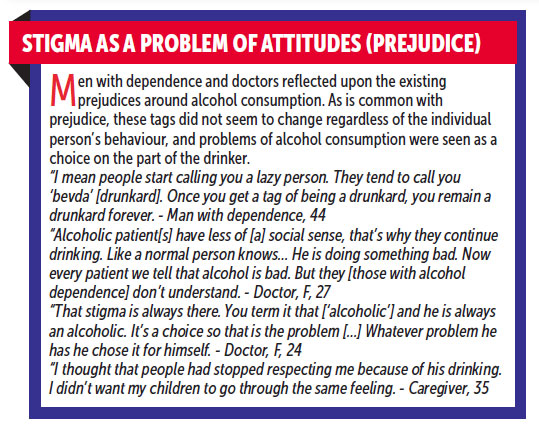 A study from Goa suggests that risky drinking patterns, such as heavy episodic drinking and frequent drunkenness, are associated with lower socio-economic class, lower educational status, perpetration of intimate partner violence, alcohol-related fights, legal issues and workplace issues. These factors probably contribute to the stigma around AUDs, which is a recognised impediment to the proper identification, diagnosis, treatment and rehabilitation of these problems.

In a study by Sangath, titled ‘Stigma towards dependent drinking and its role on caregiving burden: A qualitative study from Goa, India’ published in the Drug and Alcohol Review journal, it has been found that Men with probable alcohol dependence, doctors and family caregivers in this sample demonstrated a level of misinformation around dependent drinking. Stigma in this form may have contributed to short-term, symptom-centric treatment-seeking and intervention-delivery by men with dependence and doctors, delays in help-seeking by caregivers and a triggering environment at home for men with dependence in recovery.

Those are the hard numbers but if you have to do something about it then you have to understand why it happens this paper tries to understand what are the kind of barriers that are there in the way of seeking service and stigma is one of them stigma happens not only at the level of drinkers but also the family.

“The stigma and the lack of awareness about drinking problems along with availability of services results in people not accessing the services and even if they do, they don’t take advantage of it because people don’t complete the treatment and drop out of the treatment regimen,” he said.

According to him, ignorance depends on how drinking is conceptualised.

“On one hand, within society we are conceptualising drinking problems as morality issue. One seems to be drinking because the person doesn’t have high moral or the willpower is not good enough. This is how the general society looks at it. On the other hand, the medical professionals look at it primarily as a biological problem which can be treated with medication,” Dr Nadkarni said.

The problem is drinking issues are extremely complex. There’s connection with social issues like unemployment and psychological issues. There’s a lot of interaction between all these different factors.

“The patients go to doctors not for getting treated for alcoholism but for acidity in stomach. The advice given to them is to stop drinking lest he or she would die. That does not help. Scaring people does not get them to change it might change people’s attitude, but not the behaviour. Changing behaviour requires a lot more work, beyond warning that smoking and drinking are injurious to health,” the mental health specialist said.

Currently people having drinking problems are mostly referred for treatment to hospitals.

“In Goa for example people having drinking problem either have to go to either Asilo, Mapusa, IPHB Bambolim or Hospicio at Margao. But the kind of drinking problem that requires such kind of specialised services is just tip of the pyramid. That’s more severe part of alcohol dependency,” the head of addiction research group at Sangath said.

Dr Nadkarni added that policy makers are spending a lot of money on these kind of specialist services, which are high intensity and costly. But it will cater to only limited sections of affected people.

We are barking up the wrong tree we are spending a lot of time, effort and money which is needed only for a small proportion of people with drinking problem.