South Goa gears up to tackle impact of monsoon 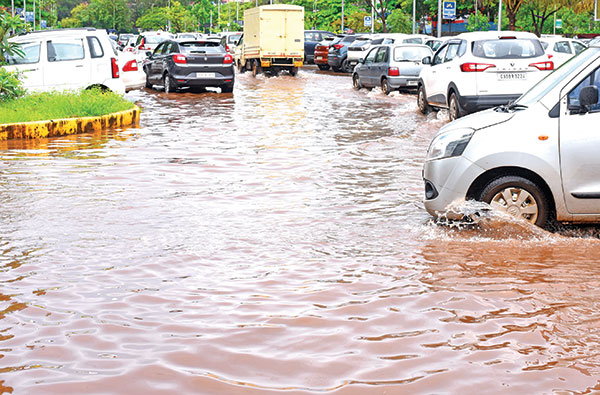 Keeping in mind havoc caused by heavy rains in July 2021, resulting in major damage in Ponda taluka, besides other parts of the state, the South Goa District Disaster Management Authority (SGDDMA) has begun the preparations for the coming monsoon season. This time extra preventive measures and timely alertness is the main agenda of the Disaster Management Authority in South district.

SGDDMA has already formed the teams for rescue operations along with arrangements for medical, shelter, food amongst others. Directions have been issued to all the concerned departments reminding them about the duties and seriousness of disaster management.

It may be recalled that the havoc created by incessant rain and flooding in the month of July, 2021 had resulted in major damage to the houses and other properties in Goa, mostly rural areas. Usgao and Ganjem of Ponda taluka were the two villages that were badly affected due to the heavy rain, and the people had to struggle for several months to recover from the disaster. Around 219 families and 1205 persons were affected by the floods. Religious structures like Saint Joseph Church and Ishwar Parvati Temple at Nanus were also damaged.

The household appliances, furniture, groceries, utensils washed away from the houses that were affected by the flood. The affected residents also lost their valuable documents, cash, etc. The livestock was also affected. The horticulture plantation was damaged at various places thereby causing a huge loss. There were several vehicles submerged in the water which included six Bal Raths from St Joseph High School Takwada, Usgao. The water supply was disrupted in the affected areas.

Additional Collector South District Surendra Naik informed that the first-hand report pertaining to the disaster management plan has been already prepared, but the in-detail plan is under process.

Nearly 123 shelter places have been identified in the entire South district, wherein 31 shelter houses in Ponda taluka itself. Directions have been issued to Public Works Department, Water Resource Department, besides concerned Municipalities, and local bodies to carry out pre-monsoon works such as desilting of nallahs, gutters, trimming of trees on road sides, removal of dangerous buildings.

A taluka wise committee has been constituted to conduct survey of dangerous trees along roadside and in jurisdiction of local bodies for immediate pruning. A control room has been set up at the district headquarters as well as at the taluka mamlatdars office of South Goa district.

More importantly disaster management authority has deliberated in details pertaining to vulnerability assessment, past history, geographical feature, impact and intensity, damage of past disaster, and the list of most vulnerable taluka/villages. The Deputy Collectors and SDMs of the concerned Sub-divisions have already identified and mapped the shelter homes.

As extra precaution, based on the vulnerability assessment the Deputy Collectors and SDMs have mapped the routes for evacuating people residing in the low areas. Recently a mock exercise was conducted by the district disaster management authority, South on May 7atBenaulim beach in order to train the fishermen how to remove their boats from the shoreline to a safer place during an emergency.

"Direction has been issued to the Director of Civil Supplies to ensure that adequate stock of essential commodities is kept ready which can be utilized during an emergency. Direction to ensure adequate stock of essential medicines are stocked in all the Urban Health Centres, Health Clinics, and Primary Health Centres of South district which can be utilized during emergencies", informed Additional Collector.

In Salcete taluka the authority has identified nearly 21 areas which are most likely to be flooded in case of heavy rains. 62 shelter houses identified in this taluka can accommodate more than 10,000 people at a time. Vulnerable areas prone to flood include Talaulim, Pedda-Banda-Socoradem (Ambelim), Colleavaddo-Passagem-Orivaddo (Assolna), Paroda, Khareband (Margao) etc. There is fear of landslide in 4th wardColva due to sand erosion, besides at Manora-Arlem (Raia), Belloy and Gounlloy (Nuvem), ChandreshwarBhutnath hill and at Baradi-Cumbeabhat-Pocklimol, in Baradi-Velim.

In Sanguem taluka, Disaster Management Authority has identified nearly eight shelter places as there are possibilities of flooding at Dando, Sanguem at the time of heavy rainfall, and dam overflow.

Nearly four government buildings have been identified for rehabilitation in Quepem taluka, besides private shelters.

Authorities will be keeping a strict vigil at Ponda and Dharbandora in this monsoon.

In Dharbandora, nearly five shelter homes have been identified as there are areas which are most likely to be flooded in case of incessant rains. Disaster Management Authority, South have also listed some nallahs which required an urgent desilting. Desilting and widening of traditional water passage in ward number six that is Bazarwaddo, Collem to allow easy flow of rain water and allow a sage footpath to go to the river. Flooding can occur if fails to desilt gutters at Navawaddo.

A special attention has been given to the Ponda taluka, keeping in mind the havoc created over here due to heavy rains in July, 2021. Nearly 31 rescue centres have been identified by the authorities and village level teams of all the concerned authorities have been formed to keep strict vigil, beside to carry out rescue operations, in emergency.

There are nearly 611 houses which are vulnerable to flooding in case of heavy rains in Ponda. A site inspection has stated that nearly 301 houses located at Usgao and Ganje, besides 57 houses in Betora, Nirankal, Conxem, Coder, 50 households from Betqui and Candol, 86 from Savoi-verem and Vaghuurme, 55 in Volvoi and 62 houses located at Curti-Khandepar are likely to be affected during hide tide after 48 hours.

Canacona too will be closely monitored by the disaster management authority, as nearly 13 rescue shelters have been identified at the village panchayat level, which include Agonda, Cola, Gaondongrim, Poinguinim, Shristhal and also the Municipal area.

“Fire and Emergency Services plays an important role at the time of disaster and hence we are fully equipped for any situations to handle. Three rescue boats have already arrived and they will be kept ready for the rescue operation,” Herculan Gil Souza, Fire Officer, Margao said.

The new recruitment of 300 staff which is kept on hold could have been a great help to the department in the coming monsoon season. However, all our fire-fighters are geared up to tackle the disaster if it happens. Equipment, may it be a tree cutting machine or other rescue machinery is kept ready.

“Yes, we are aware of the worst situations reported in 2021 due to the heavy rains. It was a tough time for our fire personnel. Now, everything is in place so that we can run for help at any point of time,” Souza said.

“Several shelter homes have been identified. More importantly, reports of vulnerable areas for the flooding have been listed, and several teams constituted under the Disaster Management Authorities have been directed to keep vigil on the areas,” Naik said.

Directions have been given to all the concerned authorities including local bodies to take preventive measures.

“People of Goa and more especially the citizens of Ponda will never forget the floods in July 2021, which had affected hundreds of people. And hence, the government and the other concerned authorities need to take all the preventive measures to avoid the disaster, and loss to the people. The Disaster Management Authority should take this issue of preparedness for monsoon very seriously,” said Roshan Naik, a resident of Ponda.