There are examples of heritage homes having crumbled to dust, but there are also success stories of families that have maintained the mansions that give Goa a unique charm. But, how long will they survive? ROSEMARY MARANDI makes a case for protecting Goa’s heritage homes 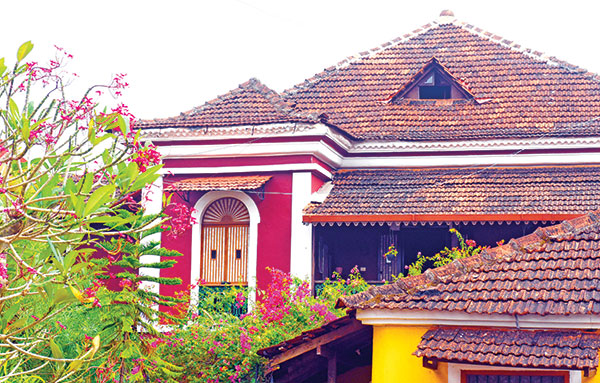 For visitors and those who chose to make Goa their home, the balcaos and mother-of-pearl shell windows of its old houses have been as intriguing as its beaches and vibrant social life. Many have spent hours admiring the beauty of these heritage houses, further many have wanted to own them, and a few have had the chance to savour it from the inside as lucky residents of these beautiful dwellings.

These houses speak as much as the State’s history and culture, as about the fine craftsmanship of Goans and their penchant for travel, education, and social and cultural interactions.

So as Goa celebrates its 60th year of liberation from Portuguese rulers this year, and the government embarks on promoting heritage tourism acutely, preservation experts and heritage lovers are pressing on the urgency to have a stronger regulation in place to preserve heritage houses that dot India’s smallest State.

The pitch has also become stronger as the double tracking of railway lines in the south of the State threatens to significantly damage the foundations of around 150 heritage houses along the track, most of which are built in stone bound with mud or lime mortar.

Ella Mascarenhas, a resident of Arossim village, has witnessed the collateral damage from such development first hand. Her house, which has been her husband’s ancestral home for over a century, had to be rebuilt in the mid-90’s as it is close to the existing railway track.

“My house is no longer a heritage house,” said Mascarenhas. “Due to vibrations (caused from running trains), it developed cracks. Everything started falling apart and we had to break it down and reconstruct in 1995.” Mascarenhas joined the fight to conserve Goa’s heritage houses from rampant development.

One of the organisations she has associated with is Goa Heritage Action Group (GHAG), formed in 2000 to advocate preservation and protection of heritage. The Group has been trying to convince the Goa government to grade heritage properties, for the past decade, in order to help serious preservation efforts. It also released a book in 2017, ‘The mapped heritage of Panjim, Goa’, identifying and grading heritage properties around the state capital.

The reality is that only a miniscule percentage of Goa’s heritage properties are currently protected. The Goa Land and Development Constructions Regulations, 2010, does protect some properties, but at present the stipulations only cover three geographical areas – Fontainhas, Margao stretch and Campal – and some specific structures outside of that area. There is currently no plan to extend these zones. For the rest of Goa, any heritage house, no matter how beautiful, can be torn down at the will of the owner or a developer, and there is nothing that can be done to stop that. (One exception is Old Goa, which is managed by the Archaeological Survey of India since it is a UNESCO World Heritage Site, and various other properties protected under ASI)

Section 6B.1 of the Regulations speaks of Conservation Zone, under which “(a) All cases dealing with any development/re-development/repairs/demolition falling within Conservation Zone...shall be referred to the Conservation Committee.... (also) prior permission for the demolition of any such structure, repairs of facades/of compound walls, change in colour or any other changes in the external appearance of a building or structure, shall be obtained from the Planning and Development Authorities/Town and Country Planning Dept, who shall grant/refuse permission after reference to the Conservation Committee,” it reads.

“In case somebody wants to add any building to the list of heritage structures (outside of the conservation zones), they have to make representation to us (the Conservation Committee). That person has to give total history as to why it is worth preserving. So then our committee goes through it, detailed deliberations are carried out and if found that yes it is worth preserving for the next generation then this committee recommends it to be listed,” said Naik. “It is more voluntary, it has to be brought to our notice otherwise people say we don’t want it under conservation.”

“Nowhere in the world is listing done like that!” GHAG’s chairperson Heta Pandit said. “Once (a list of heritage properties) is made by a government agency, it is made public for objections and suggestions from the members of the public. The conservation committee then sits, deliberates and calls genuine cases for a hearing.” Pandit further explained that the Conservation Committee has no way of knowing whether listed heritage houses in the Conservation Zones are being torn down.

They don’t go out and do inspections, and so GHAG itself has carried out surveying work to understand whether houses in the Conservation Zone are being protected. During the surveying work for their book “Mapped Houses of Panjim,” they found that Panjim lost 124 heritage buildings to delisting, or demolition, or rebuilding exercise, or was just non-existent in the decade between the first survey (2005) and the latest in 2016.

GHAG is urging the government to pass Heritage Regulations that will clearly define what qualifies a heritage structure, so that planners and citizens alike can know which structures are most important to preserve. Heritage structures are generally assigned grades such as Grade I or Grade II (A or B) or Grade III. A Grade I categorised building is understood as that of national or historical importance and no structural changes can be made in them, while Grade II (A or B) are regional or local landmarks. Grade III structures and precincts are those that are considered important to the townscape. The Goa government to date has not graded any of the properties, though GHAG has done so for Panjim. The Group identified 907 houses of importance around the Panjim area as of 2016, of which 17 were Grade I, 172 Grade IIA, 513 as Grade IIB, and 204 properties as Grade III.

Naik acknowledges the GHAG submission and said, “In the last conservation committee meeting itself (held a month back), we took it up. Earlier also grading was done by Charles Correa Foundation, that was already adopted by our government. We have to see what are the other features are there in it that can be included. The committee will go through it.”

He further clarified that TCP uses Charles Correa Foundation’s grading of buildings as a reference list. In case someone comes in with a request for making changes to a heritage structure or houses the TCP and the Conservation Committee refers to the grading list by the Foundation to check which grade these structures fall under. Permissions are given accordingly. But restrictions aside, maintenance of these houses are heavy on the pocket.

Even though the TCP department, as per Naik, has a budget of around Rs 50 lakh annually to support maintenance of listed heritage properties, private owners of heritage houses seem to have not had the taste of the benefit. To avail funds from the department, one just needs to apply seeking funds giving details such as ownership and cost estimates.

Aires Andrade, whose family’s home in Fontainhas, is a listed heritage property, says his family has not received any support from the government to maintain the property in over three decades. “It is difficult to maintain the house but I do it purely for the love of heritage and history.”

One of the major reasons to safeguard Goa’s heritage is tourism. The churches of Old Goa and protection of heritage buildings are now understood by most tourism stakeholders as having touristic value, and the importance of attracting tourists to Goa’s villages and heritage properties are discussed in Goa’s new tourism policy. The 25-year vision document has been prepared jointly by KPMG Advisory Services and Leisure Advisory Services, and approved by the state Cabinet.

While some home owners such as Pedro Figueiredo have managed to convert part of his 430-year-old Portuguese-Goan heritage home Figueiredo Mansion into a successfully-run heritage inn, some others such as Ranjiv Fernandes of Chandor are struggling to keep the property floating.

Fernandes arranges tours of his mansion for tourists and has seen good footfall, but he rues about the costs of restoring the 17th century mansion and historical and culture treasures it houses. Both Figueiredo and Fernandes have been thus far taking care of their respective mansions on their own.

Mackinlay Barretto of The Local Beat, an “appointment only” adventure tourism and heritage walks organising agency, believes that Goa is witnessing a heightened interest in its cultural identity, where visitors remain utterly enthralled by local experiences best done over a passoi (leisure walk) into the old world charm of Goa.

“In this, the luxury of local access, be it visiting a heritage mansion, having chão on a balcão or listening to stories by locals are priceless moments that are much sought after by visitors. Goa's identity remains very much ingrained in such lively heritage walks,” he said. “I believe that the tourism department has to provide better incentives to heritage home owners".

The Local Beat is planning a heritage concert at the end of the month to promote such homes.

Heritage protection and promotion of village-based tourism can put money in the pockets of locals for a whole sector of village-based tourism that will land up in the pockets of Goan locals. Imagine a scheme whereby people with old homes are given money to ready parts of their home for paying guests. Incentivising locals in terms of tax breaks and funds for renovation of their old houses, can act as a reason for them to hold on to the heritage.

While the government did introduce an incentive scheme for heritage houses to convert into home stays in 2004, it did not seem to have really worked on a large scale. In 2019, it had said it is considering a scheme of tax sops, similar to that in Rajasthan, to incentivise locals to conserve their homes.  Perhaps, the scheme should be revisited with urgency to boost tourism in these troubled times.

But as first and crucial step, GHAG says, the government must “do a proper survey of all the heritage houses in Goa, using the best practices for naming/defining a heritage structure. They must pass regulations that protect all the heritage properties in the State, not just those in the conservation area. There are vast numbers of houses that are of heritage value that are not covered by any existing protections. “They are beautiful and worth protecting for their own cultural value, and in the long term, their preservation will bring economic benefit to the homeowners, as well as the wider community, when the village remains a charming, desirable place to live.”