Against the backdrop of the Prime Minister recently announced strategy of making the country 'Atmanirbhar’, the State is facing an unprecedented setback and is presently in a precarious position due to its dwindling economic resources and increasing dependence on the neighbouring States. COVID-19 and the nation-wide lockdown left Goa without basic resources and supply of various types of essential commodities. Experts and economists believe that the need of the hour is a radical shift towards agriculture and that scaling up this sector, is the only way Goa can really become ‘self-reliant’. They believe this ‘self-sustaining model’ is the antidote to the prevailing crisis, which can aid the empty coffers of the State’s treasury as it seeks to ride out the proverbial storm and meet future challenges. PRATIK PARAB analyses further 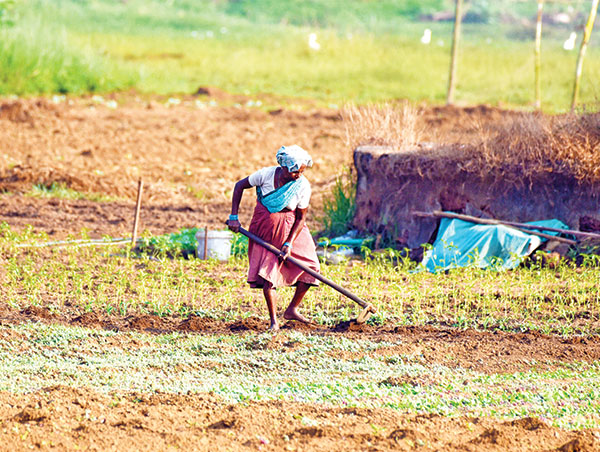 Staring at beak future and worried about the uncertainties that lie ahead, many in the State fear the worst as the local economy and demand and supply chain has been disrupted like never before and the results are devastating.

How does one stem the cracks and what is the way ahead, is a question on a lot of people’s minds right now as local businesses across sectors take a hit.

Against that backdrop, there is a common consensus amongst economists and experts that ‘going back to grassroots’ and working on what the Prime Minister has said and the Chief Minister has encouraged- the ‘Atmanirbhar’ (self-reliant) approach is the solution. On that note, they believe that agriculture should be the mainstay of the economy and that before mining, Goa was an agrarian economy and focusing on this sector will make a difference in the State’s efforts to deal with the after-effects on the economy, which is suffering from a slowdown due to the COVID-19 pandemic.

Nitin Kunkolienkar, National President of Manufacturers Association of Information Technology (MAIT) who is on the Goa Governments Committee for Economic Revival has also emphasized on pursuing agriculture to help uplift the State’s financial situation.

“The amount of scope for agriculture in Goa is highest in comparison with other States. But, the contribution of agriculture is only 7.18% to the total GDP of the State. We have recommended that the Government increases this to a least 15% and it is possible” said Nitin Kunkolienkar.

Former Director of Agriculture Sachin Tendulkar said that the road to economic revival of Goa will be full of hurdles in the post-COVID scenario. “One of the sectors that need urgent attention and aggressive monitoring and regulation is agriculture. This sector can provide work to unskilled hands locally, in a decentralised manner, maintaining social distance, boosting immunity and ensuring that the workers earn decent wages. Money in the hands of small and marginal people will be spent on basic needs and will roll multiple times earning revenue for government” said Sachin. He also expressed the need for the Agriculture Department to be proactive in its approach and concentrate more on organizing and promoting community farming in common lands.

“This will require that Krishi Door, Technical Assistant and AAO reach out to farmers who own common land and are not cultivating. For instance, Naguesh Samant from Dabhal has demonstrated what can be earned through agriculture by producing 25 tonnes of Chilli, 60 tonnes of cabbage. However, you travel to the above field 6 km away from Tatoti in Kuina, Nirankal they are lying fallow for the past so many years” Sachin added.

Further, the lift irrigation system in Kuina was resurrected at a whopping cost of Rs 60 lakhs with a 400 mm pipeline and a devoted pump operator but the land still lies fallow. “The Shirodaconstituency, which voted for a second time for change and development, has not seen any change in land use. If farmers tilling this field come together and avail community fencing and even try fodder there is huge scope. So economic revival is not only about making available more money but changing the mindset. Fallow lands like these if cultivated can make Goa Atmanirbhar” told Sachin.

Speaking about what the government can do, Leader of Opposition  Digambar Kamat has recently submitted a memorandum to Chief Minister Pramod Sawant, detailing a Rs 100 crore economic revival package, which he has demanded be implemented immediately.

In this, the former Chief Minister focuses heavily on agriculture, while describing how the impact of the fallout on the State’s economy since the nation-wide lockdown.

“The government of Goa needs to look at the pains of our plantation–growers, farmers of cashew, areca nut, coconut and pepper crops, which have been provided with meagre rates as Minimum Support Price. The Agricultural Sector needs to be given utmost attention and priority with maximum possible financial aid, which should be provided at the earliest,” he added.

The Aam Aadmi Party has also urged the government to take immediate steps on the revival of the economy, keeping in mind what measures have to be taken because of COVID-19.

Other groups, non-political, believes that the present economic condition of Goa is unsustainable due to its economic policies; which, coupled with its exceptional environmental sensitivity and unique social conditions, has left Goa facing an irreversible socio-economic and environmental collapse in the near future, unless policies are corrected without any further delay.

Some of the issues, they say Goa is grappling with are water security, food security, public health, and coasts, rivers and khazans degradation due to speedy commercialisation of the State and also due to misplaced priorities.

One such group, Rainbow Warriors (RW), who have been working on the issues of environment in the State have undertaken a deep study of Goa with the emphasis on economic revival of the state. RW added that their requests to the government for creating an environment of self-sustenance and self-reliance have been resonated in the call given by the Prime Minister for becoming Atmanirbhar.

Experts also refer to the earlier State Water Policy for Goa, which listed the constraints faced by the water resources of the State. That had sounded an alarm that Goa is in for a massive water crisis in the coming years on account of the loss of local water resources due to indiscriminate mining of iron ore, basalt, laterite and basalt, industrialization of plateaus, real estate, urbanization and tourism projects, coupled with diversion of inter-state rivers, such as the River Mandovi diversion by the Karnataka government. Further, 3 out of the 12 talukas of Goa, namely Pernem, Bardez and Bicholim are dependent on Tillari Dam in Maharashtra for their water supplies.

“Widespread pollution is also destroying water resources across the State. It is certain therefore that unless the destruction of local water resources is stopped, Goa will find itself in the middle of an insolvable water crisis with unimaginable consequences,” experts added.

They further highlighted how the recent lockdown exposed Goa’s dependence upon other States for its food supplies.

“To combat, what is one of the State’s biggest weaknesses; it is certain that unless steps are taken to rectify this situation and make the State food secure, Goa will face even more severe humanitarian and survival crises in the future. It is therefore absolutely necessary that we should conserve all lands and rivers in Goa for farming, animal husbandry, forestry and fisheries, if we wish to make Goa food secure in the future,” they added.

Experts further opined that given the weakening monsoons it will be a major task for the State to survive through the reduction of agriculture and ensure security of food in Goa.

While placing all the emphasis on agriculture,  Abhijit Prabhudesai, member of Rainbow Warriors, said that the State has to restore all the Khazan lands back to its original glory, on priority. “We can be self-reliant for food and at the same time create at least 50 thousand jobs for Goans if we emphasise and put efforts in restoring our khazan lands. In this economic crisis the Government will save a lot of money by not using cements while restoring our bandhs, khazans and small water bodies, as we advocate the use of mud and laterite stones for the building of these natural heritage sites and not cement. Use of concrete and cement has destroyed several of our productive khazan lands” said Abhijit.

It is to be noted that the villages of Shiroda, Borim, St. Estevam have started protecting and reviving their khazan lands and Chinchinim has successfully done the same by reviving agriculture in a land, which was earlier left fallow for decades.

Abhijit also advocated for the restoration of the agricultural lands in the mining areas which are ravaged by the leftover ore industry of Goa.

“Devastation of ecology and environment in the hinterlands has also been a major factor for the changes that the State has undergone. All of the iron ore mining leases in Goa are located in the Western Ghats of Goa, in the four talukas of Bicholim, Sattari, Sanguem and Quepem. The mining leases are exclusively on lands of the indigenous communities, whether forest, grazing or prime agricultural lands, and which are critical water resources not just for the local communities, but also for the entire water-scarce State of Goa. The iron ore mining belt is the biggest source of environmental security for the State of Goa. All the major environmental resources of Goa, including forests, water, soil, fertility, wildlife, and flora and air quality require the conservation of the traditional land use of the mining belt. The need of the hour is to restore these resources on a war footing to their original glory, bringing about a revival of the sustainable economies of Goa.