The Fate of Stray Animals in Goa’s COVID Times 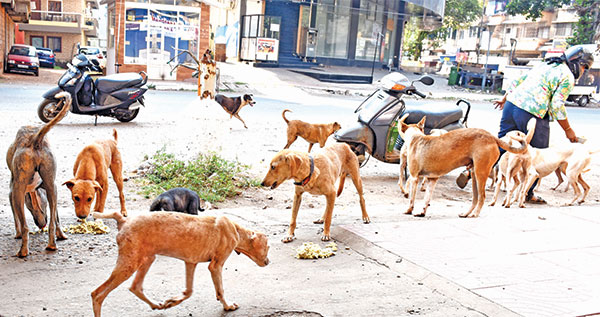 The COVID lockdown created a sudden, unusual and difficult situation for the animals, especially the strays and those living on the streets, as their usual sources of food disappeared overnight. Having become entirely dependent on human goodness to provide them with sustenance -- leftovers from peoples’ homes, discards from restaurants, beachside shacks and roadside stalls, trimmings from the meat and fish vendors, the assorted surprise goodies in the garbage bins and at garbage sites -- would they survive the almost absolute closure of human kind?

As it turned out, most of them got through the mysterious and bewildering absence of human beings and food from neighbourhoods, simply because a number of large-hearted people in the State decided to go the extra mile for them. This is a story, in brief, of the fate of strays in COVID TIMES.

No sooner did the Prime Minister announce on March 24, the imposition of a 21-day-lockdown throughout the country, beginning from the midnight of the 25th, animal rights activists and animal lovers began frantic telephone exchanges. The real concern was whether the animal shelters would be permitted to function at all. If yes, - then whether any special dispensations, from the quarantine would be available for the shelters’ staff and for procurement of food for the inmates of the shelters. People were also worried about the animals on the street, bereft of access to food with the sudden closure of markets shops, hotels, office canteens, etc.

Fortunately, thanks to Kuldeep Singh Gangar, an exceptionally pro-active Secretary for Animal Husbandry recently posted to Goa, solutions for every problem were quickly found.

Gangar was already off to a good start with the animal activist community being extremely informal and approachable by nature and topped with a strong love for animals. In fact, within days of his first meeting with the activists in January 2020, he had set up a WhatsApp group. This later became the lifeline for the stray animal feeding programme during the lockdown.

Gangar quickly ensured that passes were issued to all shelter personnel to ensure that there was no disruption in the functioning of the locations. But feeding street animals had a different set of needs: many more hands as well as food. Fortunately, a large number of citizens volunteered to be enrolled as feeders. This was quite unprecedented. There were business people, traders, teachers, college students among the volunteers, all eager to be a part of this compassionate army. Eventually, a total of around 514 passes were issued to pro-animal welfare citizens -- from Canacona in the south to Pernem in the North -- based on recommendations of NGOs working with animals. Of these, 327passes were issued for North Goa alone. The area-specific passes enabled the holder to step out of their homes to feed street animals in the designated localities. In North Goa, the maximum number of passes – around 137 – went to Bardez taluka, which hosts a large number of NGOs. Salcete and Tiswadi took 50 each, while Ponda, Mormugao and the balance talukas required lesser numbers, around 40 each. Feeding of street animals began in right earnest because the government quickly cooperated.

Strict accounting of food and its distribution routine was maintained by all the NGOs. There could be no random feeding or duplication or wastage, as food itself was scarce and had to be distributed among as many animals as possible. So, areas were marked out, charts were drawn up with lists of volunteers and their timings and reports prepared at the end of each day of the number of animals fed in different localities.  For the most part the food was cooked by the NGOs and the volunteers carried buckets of ‘khichdi’ in their vehicles throughout the day to their allotted areas, making sure that the place was clean before they left. The WhatsApp group was daily inundated with photographs of animals being fed on street corners, city centers, in residential areas, parks and on the beaches.

But feeding of strays did not happen through the NGOs’ efforts alone. Policemen and security guards helped, as did lifeguards on beaches. We also discovered that Goa has many people who care for street animals quietly and use their own resources for doing so. A business man from Quepem was found feeding 200 street animals in the town and in Sanguem, aided by his mother and wife. They cooked the food which he would take by car to the different villages. A teacher from Ponda said she had been feeding around 40 street animals for the past several years and taking care of their health as well. So feeding during COVID was not a major issue. A young girl who discovered some puppies born on the street took them home and later found homes for 8 of them.

It certainly helped that the PM specifically drew the attention of the nation to the welfare of animals in his televised address on March 24. He said: “In addition, please also think about the animals and birds in the area where you live. Because of this lockdown, even animals will also face the problem of where to get food from. Think about them too.” Perhaps this reminded people of their constitutional duty [Art 51 A (g)] to show compassion to all living creatures. Or perhaps, it was the sight of the feeders moving around in the hot sun that motivated people to contribute to the effort.

Be that as it may, many of the NGOs reported a spurt in donations to their shelters. People gave rice, dals, biscuit packets, milk and eggs, and sometimes cash donations as well. Atul Sarin of Welfare of Animals in Goa (WAG) said that on finding that there was no ‘bhusa’ (rice bran) to feed their cattle, he sent out an SOS on social media for green leaves (any kind -- banana, palm, mango, jackfruit) and was amazed at the piles of leaves that were soon deposited outside the WAG gates. A gentleman from the South opened the gates of his farm property to let the cattle feed on the green grass. There are umpteen examples of citizens coming forward to help the strays survive.

The animals themselves were surprisingly quite well behaved. Despite their obvious hunger and thirst, there were by and large no dog fights on the street. Video recordings and photographs show animals eating quietly, deeply concentrated on finishing whatever was placed in front of their newspaper plates. Not a grain would be left at the end. Smaller animals were fed separately, as were the aged and infirm ones. Interestingly, street dogs who scoot away at the sight of a shelter vehicle were now running towards it, knowing that there was something in it for them.

While not many local bodies participated in these efforts, one must mention two which made outstanding efforts to quench the thirst of strays: the Corporation of the City of Panaji purchased 45 cement bowls for water, placed them at strategic places all over the city and ensured they were refilled every alternate night by the night water tankers. Likewise, the Anjuna village panchayat, set up a large water trough on the barren plateau and thirsty animals were seen regularly congregating around it. Appeals by activists on social media to keep water bowls outside the gates of buildings and within colony premises drew a modest response.

While it was relatively easy to feed the smaller animals, it was quite an uphill task to source food – grain and fodder – for the large animals. Cattle feed comes either from Karnataka or Maharashtra; and with the borders closed and movement of vehicles by road and rail halted, the activists running the ‘gaushalas’ faced several anxious days as each of them holds between 150 to 400 cattle. Once again, Gangar represented the case of the gaushalas before the authorities and soon transport passes bringing in the much needed fodder were made available. A newspaper report that 10 elephants held in captivity in the tourist spice farms / resorts were facing food shortages resulted in calls to the Forest Dept to ensure that relevant transport passes were issued. The Chief Wildlife Warden also sent his officers to inspect the animals and reported that they were in good condition.

While all regular animal welfare programmes for sterilisation, vaccination, lifting of cattle from the streets, etc., came to a halt during the lockdown and many shelters put up notices requesting the public not to bring their pets to the shelters for routine problems, emergency treatment for street animals was continued. Two organisatons must be singled out for their exceptional services in this time of crisis, namely, Worldwide Veterinary Services in North Goa and Dhyan Foundation in South Goa. The management and staff of these two organizations were constantly on their toes as they responded to emergency calls from across the state to ferry sick animals, help delivery of pregnant cows, carry out emergency operations and organize the rescue of animals stuck in drains and water pipes.

And so it appears that in Goa at least, even the worst of times had their silver lining. The lockdown was no different. Although the usual dumping of puppies outside the gates of the shelters continued, and reports of cruelty to animals also continued to roll in, there were far less accident cases due to the sheer absence of motor vehicles. The positive outcome of the lockdown was the large number of volunteers who flocked to the shelters to help in any way they could. As Sarita Parab, Director of the Ponda Animal Shelter remarked: “The biggest asset that PFA found during this lockdown is the large number of citizens ready to assist in the care of the street animals.” Surely, this is a clear sign that Goa has a heart which beats strongly for animals.

(The writer is a member of the State Animal Welfare Board and also President of People for Animals, Goa, which runs the Ponda and Mormugao Animal Shelters)