The grass (sports) ain't greener on the other side... It’s best where you water (fund) it!

Every sportsperson wants to climb up the ladder and reach the summit. While some get lucky to find an escalator to get to the top, others, especially the poor and the girls in particular, have to struggle and are forced to cross hurdles. ALLAN VALENTINO D'CRUZ talks to one Goan teenager Chanel Crizzle who has not only shone in various sports at the State level, but has also excelled internationally at such a young age. Whilst thanking her family and school authorities for her success, she is filled with anguish at the government authorities who just make promises but fail to provide the real push to attain her potential 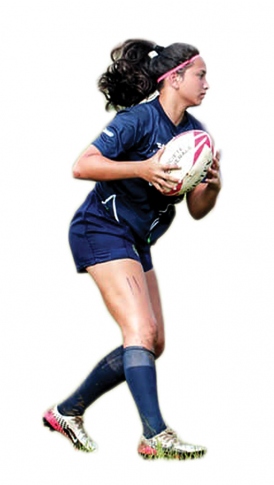 Every sports person/athlete feels the grass is greener on the other side. An athlete once complained of seeing a shuttler (badminton player) getting better facilities while a hoopster (basketball player) felt the football fraternity is doing a brilliant job considering the support they received from the State Government.

Every sports person and an association feel the other association is doing better. But is this really true? Is the grass really greener on the other side?

The pictures painted by various sports associations could be misleading but only the ones who have been associated with different sports would be able to speak on the same. And there are very few who would be able to shed light on this issue.

A tale of a young champ facing

Chanel Crizzle is one such athlete who has not just played various sports but has been a champion in every field she has participated in. However, she has experienced highs and lows and faced almost similar problems in every association except rugby and football.

“The story and struggles at most associations are the same. They try to help but they lack support from the government and authorities,” stated Chanel.

Chanel holds the state record in shot put in the U-14 and U-17 category. She is currently the fastest girl in her age category in the 100m and had gone to represent the State in Assam earlier this year. She has participated in a few other athletics Nationals and has won second place in the West Zone Athletics championship in shot put.

“I was the lone athlete to participate at Nationals in athletics in February 2021. However, the association didn’t fund me at all. My family supported me and let me participate in the championship. I had to even wear my own jersey during the event which was quite disappointing,” expressed Chanel, who had to wear her tracksuit which she received for the Football Nationals earlier.

The Assistant Sports Secretary of Sharada Mandir School, Chanel won many accolades in several sports like sepak takrow, handball, athletics, football, table tennis and many more. Chanel highlighted the situation being the same at every sport except football. “Most of the sports associations are struggling for what I feel could be due to lack of support from the authorities concerned. I experienced this and I know the struggles the sports persons are going through,” stated the 16-year-old multi-talented girl.

“There is a lack of infrastructure facilities. Sometimes the grounds are there but not maintained. Sometimes we have good grounds, etc, but then there is no equipment. Then there is everything and we fall short of good coaches. This has been our struggle,” said Chanel.

Having also represented Goa at the U-14 touch rugby Nationals three years in a row and having captained the State team for two years, Chanel successfully led her team to finish second during her captaincy.

Recently, Chanel made it to the Rugby National team squad. The news broke out when the local MLA tweeted about her feat followed by the Chief Minister Pramod Sawant congratulating the youngster.

Chanel represented the Nation and even returned with a silver medal in an international rugby tournament held at Tashkent, Uzbekistan, a sport which she took up just three years back.

Does it really matter to Goa govt?

On her return, she received reception from her friends and the Goa Rugby while the local MLA once again took to her social media to congratulate the 16-year-old girl. But then besides just mere congratulatory texts, nothing really followed next. 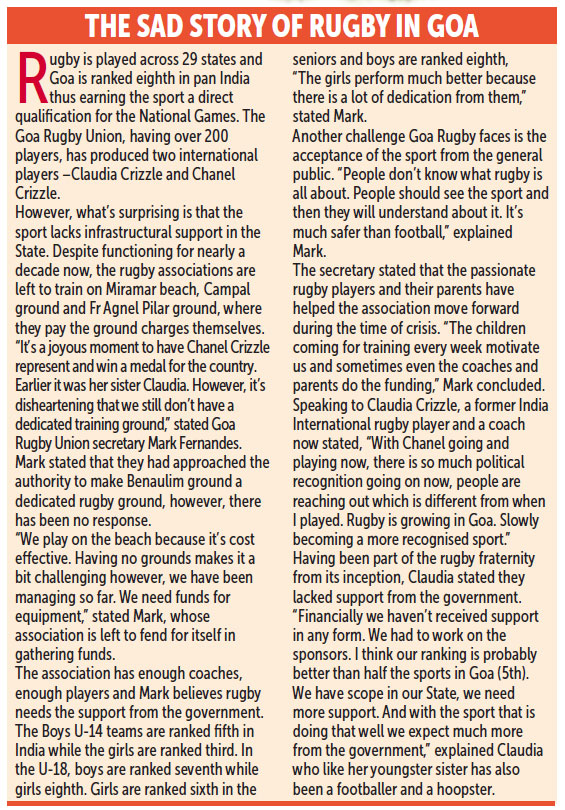 In recent times, the States like Odisha and Bihar have been doing a great job in promoting sports in the country as well their States. The Odisha government was first to felicitate the Silver winning rugby team where their CM Naveen Patnaik even gave Rs 5,00,000 to the team while the Bihar govt gave their two players Rs 5 lakh each.

The amount could be small, but the State has been making efforts in motivating the teams and the players. Earlier, before the championship, the Bihar government had announced their support in terms of providing facilities and aid to the rugby teams.

Cost of being a women

Chanel has represented Goa in football at the U-14 and U-17 nationals at the young age of 13 and had been playing in the Vedanta Women’s Football League and she feels the Goa Football Association has been much organised and has been providing the better facilities than the rest.

However, Chanel experienced a different struggle here. It’s the discrimination and how the women’s sports is neglected and given lower preference as compared to the men.

“The struggle is real in other sports. However, in football it’s better as the association takes care of you. However, just like the other association, where women are sidelined, even in football men are funded more and encouraged a lot more than women. And I don’t think it's right for the people to do that. Women can also go and perform at the highest level,” stated Chanel.

“Despite not being given as much attention given to the men's team in training, we still went on to come third in at the Nationals. If they would have given us the same attention; then we could have done better,” expressed Chanel. 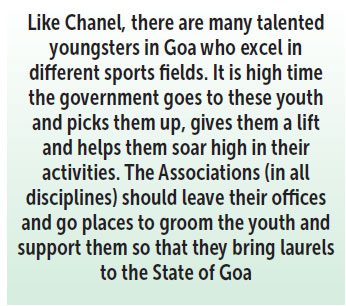 The shy girl yet a robust personality has outperformed herself and her expectations in every sport she's played and continues to do so. Being the only girl from Goa to attend the U-18 India team selection camp with no professional experience in contact rugby and simply deserves more respect and support.

Chanel thanked the school authorities and parents for their support and motivation in pursuing the sports and also pleaded to the government and authorities to take care of the sports persons and specially the women sports and said, “Goa has champions. Only proper infrastructure, facilities and support from the government will motivate the Goan youngsters in carrying on with the sports,” she expressed. Chanel called out to the government to help them in providing a dedicated ground and appealed to everyone to help in sponsoring and financing the Goa Rugby Union. Herald appeals to all the business houses in Goa to come to Chanel’s aid so that her talent in sports travels far and wide like the Chanel Perfume.

Like Chanel, there are many talented youngsters in Goa who excel in different sports fields. It is high time the government goes to these youth and picks them up, gives them a lift and helps them soar high in their activities. The Associations (in all disciplines) should leave their offices and go places to groom the youth and support them to bring laurels to the State of Goa.