The problem is the politician, not the people

Why is it that there is so much turmoil in Goa? Why the suspicion and apprehension in the minds of the people about the intentions of the government? ANTONIO LOBO proposes to examine the factors lying behind the almost continuous simmering dissatisfaction in the Goan population 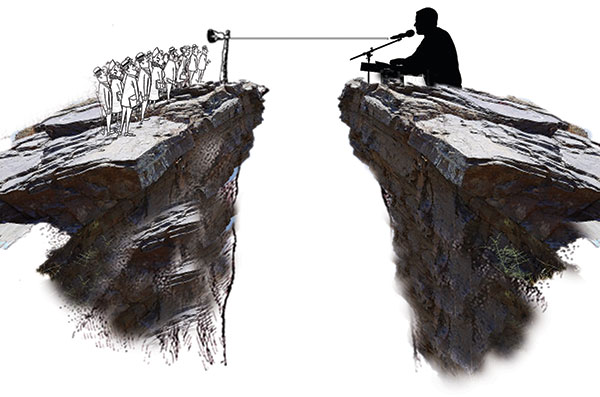 We need to step back a little...to the days post the Opinion Poll ...and look at a few markers in the not too distant past that provoked the ire of the people:

- Zuari Agro Chemicals Ltd, one of the first heavy industrial behemoths was set up in Goa, after D B Bandodkar the first Chief Minister had literally made a present of a huge tract of land belonging to the Comunidade of Chicalim at Sancoale, to the company and was responsible some years later for polluting the aquifers in the village due to seepage of toxic chemicals. The government of Shasikala Kakodkar (DB’s daughter) despite visible illnesses such as rashes and boils appearing on the skin of children and stomach complaints, after consumption of the water from the surrounding wells and even after the water tests had shown presence of abnormal levels of chemicals, was not willing to take steps to have the factory take measures to stop the pollution. It needed hunger strikes and road blockades for the government to finally see sense several months into the protests. The name ‘upas nagar’ in Dabolim originates from that agitation.

- The Ramponkar Movement which originated mainly after the MGP government created the problem by encouraging, with hefty subsidies, the acquisition of mechanised fishing vessels such as trawlers and purseiners, without establishing any ground rules which would prevent a clash of interests between the traditional fishermen and the new mechanised class. No laws were in place to prohibit mechanised fishing within a certain distance from the shore, or to protect the fish shoals during the spawning season or to prohibit bull-trawling which was responsible for the destruction of all organisms existing and thriving on the sea bed upon which the fish and other marine life depended. This struggle which was at one stage quite violent, by Goan standards, went on for over seven years and was responsible ultimately for the downfall of the MGP government;

- The setting-up of the Nylon 6,6 factory in the taluka of Ponda, which was a proven highly polluting and toxic industry, sought to be transplanted from the West, where it had already played havoc with the health of the people, to a third world country by Du Pont and which the government of Goa saw fit to welcome with open arms. The government even helped to identify and acquire land for the factory. This was rightly objected to by the population of Ponda and it is due to their persistent and determined struggle that that industry was unable to start its operations in Goa.

- The laying of the Konkani Railway line was another project which drew protests, not because the people did not want it, but due to the route chosen which would pass over fertile cultivable land as well as through densely populated talukas of Bardez, Ilhas and Salcete. Despite a prolonged agitation this project went ahead. The sad part is that at the fag-end of the agitation certain elements allied to the RSS and to the BJP tried to turn it into a communal issue. We can see today the ill-effects of this line passing close to the cities and through the paddy-fields. There is stagnation of the water along the route which has led to the rise in mosquito-borne diseases.

- A Special Economic Zone (SEZ) was sought to be created for the setting up of industries meant for export production. These industries would be exempt from many of the labour laws and/or provisions, including exemptions from certain taxes. These special zones would have been highly detrimental to the people as it would create new power structures not answerable to the majority of local authorities nor be beneficial to locals in terms of jobs. Yet the government favoured the creation of such zones. A large tract of land on the Dona Paula plateau was acquired and the government went ahead with the allocation of land to industrialists, some of whom bid for specific areas of that land for the purpose, of all things, the setting up a supermarket. Some politicians invested in other plots for speculative purposes and the government saw nothing wrong with that. This struggle went on for a couple of years until the government realised that it would not be able to put down the agitation without causing permanent damage to its chances for re-election and scrapped it, but had to subsequently pay compensation in crores of rupees to the investors.

- In order to satisfy the insatiable greed of the elected MLAs who do not find a place in the cabinet, the government came up with the plan of setting-up the Planning and Development Authorities (PDA) in each of the two Districts of North and South Goa whose task it would be to prepare the Outline Development Plans (ODP) for the areas over which they had jurisdiction. The Town and Country Planning Act was amended in order to subordinate the Town and Country Planning Department (TCP) to the PDAs. These bodi es became the milking cows of the politicians appointed as the chairpersons and who, for the right price, were and are willing to change the zoning in the ODPs from orchard to settlement and from settlement to commercial and so on. This has led to massive changes in the land use maps. This provoked massive protests led by an organisation calling itself the Goa Bachao Abhiyan (GBA) calling for scrapping and preparation of fresh plans for the period ending with the year 2021 as they were permitting development even on cultivable land. Though the government assured that the plan would not come into force, the depredations did not end there as the politicians found a way to bypass the lack of an approved plan by resorting to a case by case approval of applications based on the old ODP. Individually, however, some villages specially in Salcete, have been raising objections to multi dwelling units being given permission to build in their village.

- One of the two latest examples of the government’s dictatorial decisions and insensitive and uncaring attitude is the Shel-Melauli episode where an IIT (Indian Institute of Technology) was sought to be built on land which has been cultivated by the locals allegedly for decades and which provide the means for their livelihood. Only after a fierce opposition not only by the population of the affected village but also by the surrounding villages , that went on for months, did the BJP government finally decide to drop the project fearing for its future election prospects

- The other issue is the decision taken by the government to permit the broadening of the Goa-Belgaum highway, to allow the Goa Tanmar Transmission project as well as the double tracking of the South Western Railway (SWR). All the three linear projects pass through protected forest areas, namely the Bhagvan Mahaveer Wildlife Sanctuary and the Molem National Park, both located within the highly sensitive and fragile Western Ghats eco-system, a world heritage site recognised by UNESCO. Presently a committee appointed by the Supreme Court of India ( CEC) is studying the issue after visiting Goa and hearing the objections.

Industrial estates were set up all over Goa where thousands of industries small, medium and heavy were invited with promises of subsidies, tax moratoriums and subsidised electricity (in an energy-deficient State). No plan was prepared to decide what type of factories should be allowed with a view to employ Goans, the declared aim, and give the necessary training/know-how to potential workers/employees, nor were the industries required to do it, resulting in thousands of outsiders being employed (whilst at the same time thousands of Goans went out of Goa in search of jobs specially in the field of Information Technology and engineering in which Goans are proficient), thus changing permanently the demographic balance and providing the politician with the opportunity to play vote bank politics with the migrant as the unwitting pawn.

All the governments in Goa, which are supposed to be democratic, function in a highly autocratic manner, where decisions which have the potential of adversely affecting people’s lives, be it in the field of industrialisation, environment, tourism, mining or any other, are taken without conducting any consultation with the population. It is a top to down process which, when faced with opposition, is sought to be implemented by the use of force and by threats to the liberty of the opponents. Ego of the politician plays a big role in this doubling down, the other is the hidden monetary consideration.

The last three linear projects mentioned above are sought to be implemented allegedly, to transport imported coal to cater to industries operating in the State of Karnataka belonging to big magnates, who had reportedly heavily contributed to the BJP war chest during elections, such as the Jindals, Adani, Vedanta, etc, by using Morrmugão port as the entry point and the whole of Goa as a corridor. In exchange for this we get coal dust pollution, destruction of heritage homes and of our forests and the concomitant damage to the flora and fauna in one of the most sensitive eco-spots in the world. That there is no coherence in the planning process is evident from the fact that polluting industries, the destruction of the forest cover and of the architectural heritage which are otherwise anathema to a tourism-based economy, does not seem to bother these ‘planners’.

Protests are the only measures that the population can resort to in order to seek to prevent the complete destruction of the land as well as from being turned into irrelevance by the vote bank politics where migrants have become involuntary pawns. There are other insidious things taking place such as the uncontrolled ‘development’ (read concretisation) of Goa, which has no limits, all with the blessings of the politicians. The result is the scarring of the once pristine verdant beauty of our hillsides with ugly buildings mushrooming in the place of trees. This is an ongoing plague upon our sacred soil and there does not seem to be any way to stop it from continuing to happen.

The politician complains that Goans oppose everything! Really? The problem lies with you Mr Politician and not with the people.