Never before has the tourism industry faced a crisis like this. Not only does the immediate future look bleak, there are also various factors to look at in the present such as adopting to the new safety norms and adjusting with their limited resources. VIBHA VERMA speaks to various stakeholders, who are hoping for some sort of concession from the government and that whatever business does come in, is enough to tide over the coming season. Many in this interim period, have taken up innovative alternative options to keep themselves busy and earn some revenue to help them sustain their livelihood 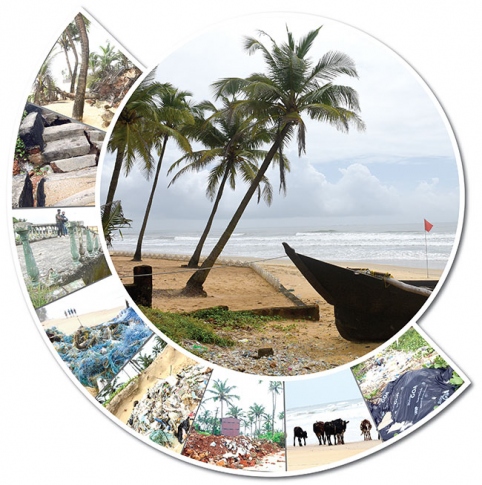 oa’s tourism sector has earned the repute of commanding a major share of employment be it the local community or non-Goans. After a disastrous collapse of the highest revenue generating industry - Mining - around 8 years ago, Tourism took over the top position only to encounter hurdles since 2015.

While stakeholders managed to pull it off all this while, COVID-19 pandemic has severely crippled the sector leading to job losses and an economic impact that might take many months to heal. The 2019-20 season saw an abrupt end due to the COVID-19-induced nationwide lockdown in March 2020 followed by various difficulties linked to the contagious disease.

As the virus is here to stay until the vaccine is found, Goa opened its doors for tourism from July while restrictions on movement of persons and goods were lifted this month. Now as hopes are pinned on the new season 2020-21 starting next month and strategies being chalked out to woo visitors, a bunch of dejected tourism traders have already switched over to an alternate source of income.

Converting the swimming pool to fish pond, utilizing open space into poultry farms or making use of the hotel rooms to stock farm food; things have changed particularly for those in the small and medium hotel/accommodation industry.

Like for instance, a two-star eco-friendly hotel will not be providing rooms for tourists, if at all the season picks up in view of the increase in COVID-19 cases. Foreseeing downfall in the business in the upcoming season, Serafino Cota, owner of Dona Sa Maria at Tamorim near Cavelossim beach has taken up farming and poultry business.

“I have stopped accepting bookings for this season. There is no hope that tourism will be revived soon. In order to sustain our living, I have been growing paddy and looking forward to growing vegetables once the rains stop,” Cota told this reporter while recalling the heydays when visitors looking for tranquil ambiance would flood his hotel rooms.

Cota along with his family has also started a bakery and poultry business at the same premises on a smaller scale. Among local staff, three men, hailing from Jharkhand continued to be with Cota even during the lockdown. “I have engaged my hotel staff for my present business and paying them regularly. I am waiting for the good days to come but till then my focus is farming,” he added.

On how he has been utilizing his hotel space, Cota explained that all his farm produce will be stored here. Some rooms are allotted to his staff for stay.

Paul Lobo, owner of Lobo’s Guest House, at Cavelossim has also switched over to agriculture and bakery amidst unreliable tourist season 2020-21. The bed and breakfast place for tourists will also remain shut with the space being utilized to boost the alternate occupation until revival of tourism.

To help the distressed traders, the Centre for Responsible Tourism (CRT) tied up with ICAR at Ela Farm to hold sessions of agriculture. It is the lockdown period that CRT motivated the traders to convert the challenge into opportunity.

“During the lockdown, we assumed the business wouldn't start that soon… The challenges have to be converted into opportunities. This is what we have done. Some guest house owners have started fishing in their swimming pools, open spaces are converted into poultries to support themselves and their families,” Fr Freddy Braganca of the CRT said while discussing in detail the phase since lockdown.

Since the majority has been taking up farming, the CRT tied up with ICAR Ela Farm to organise sessions in agriculture. “They have been cooperative… With the expertise provided at these sessions, rooms of some guest houses are converted into indoor greenhouse,” he added.

A recent report by YouGov DestinationIndex — an international research and data analytics company that tracks public perception of the world’s most popular hotspots on a daily basis surprisingly revealed that Goa is the first choice of urban Indians for their next vacation followed by Delhi, Kerala and then Maharashtra. Interestingly, Goa is preferred over Maldives.

However, the news comes with many challenges considering the current scenario the entire world is reeling under. While the small and medium tourism traders across the coastal State fear a grim situation, the 5 star and 7 star hotels seem to be a bit relieved.

“Since there is no restriction on domestic movement, visitors from high income groups might turn up. We also expect business trips. In fact, bookings have already begun. We are following all the SOPs to ensure health standards are maintained in the wake of the pandemic,” Sales manager of a five-star resort said. The resort official however conceded that they might not record 100 percent occupancy at least till the COVID-19 cases drop.

Official records indicate 3,870 hotels in the State. Of these 700 applied with the Tourism Department for resuming operations while 610 have been granted the permission. The Travel and Tourism Association of Goa (TTAG) explained why the hotels have to register, a practice never adopted before. “Owing to the pandemic, the government has released SOPs wherein all health safety standards have to be followed. Since we are in the health crisis, hotels have to register with the department to ensure these are following the mandatory protocols for the safety of its staff and guests,” TTAG President Nilesh Shah said.

While the luxurious hotels might find a way to earn some profit, the middle and lower in the hierarchy of the hospitality sector are into next mode. Braganca explained the plight of the medium and small hotel/guest houses claiming ‘the whole problem is their survival.’

“The question is about their survival at this phase of life. If they shut their current business to try luck into a new venture, they will have to go through all the processes to re-start the former trade in future,” he commented on being quizzed if the new farmers/bakers will not look back to the hospitality sector once the situation subsides.

The forum is busy preparing a detailed report to seek rehabilitation packages for all stakeholders, from the government. For now, business consultants, economists and financial advisors with whom CRT has held discussions have anticipated not a good future for the tourism industry. “They say that tourism will not open for the next 2-3 years because of the drop in economy,” Braganca explained, adding, “Financial issues are not only with those in the business sector but everyone. People don’t have money to even go on leisure trips. The pandemic and monetary issues will keep visitors at bay for some time.”

Beach shacks, which have been instrumental in attracting a huge number of tourists to the State, might also not show up unlike in pre-pandemic times. Government’s silence on requests to waive off or reduce license and excise fees could be one of the main reasons that shacks might delay its presence by the sea side.

“We are open to starting shack business but none of us have so far made applications for renewal of licenses as the government has assured us it will come up with something. We had requested the government to reduce license and excise fees. Last year, we paid full amount but the season stopped due to COVID-19. So some relief in the oncoming season will be appreciated. Government should understand that we are also at a loss,” he said.

Cruz also emphasised that shack operators are not pressured to refrain from applying with the authorities for license renewal by paying full amount. “It is an individual decision,” he said.

“We hope everything is sorted soon and we commence our business before Dussehra and Diwali because that is the time when tourists’ influx will be in large numbers,” Manuel said.

The shack operator from Calangute is hopeful of good response citing that Goa is already receiving a good number of travellers after lifting of inter-state movement restriction by the ministry of home affairs. “We will at least earn something if not profit,” he added.

With delay by around one month expected since the government is yet to take a call, Sindhudurg is likely to come as a biggest competitor with the Shiv Sena government planning to set up shacks in the district. “Sindhudurg is also a coastal district and already a famous tourist destination. Once the Maharashtra government’s policy on tourism is approved, the neighbouring district will soon have beach shacks on lines with Goa. It will be a tough competition for the Goan shack operators to ensure they don’t lose their visitors,” shack operator Inacio Noronha added.

With no sign of charters commencing their operations at least in the near future, dependence on domestic tourists is evident. A senior official in the tourism department suggested that Goa should consider a travel bubble, like the way some foreign countries have done, to allow international tourism. “Lockdown has significantly weakened the financial health of tourism and its allied activities. For now, only relief and repatriation international movement is allowed. The ministry should consider a travel bubble to allow at least limited movement of incoming foreigner tourists whilst strictly enforcing all the safety standards required to stay safe from the virus,” he said wishing anonymity.