There’s an oft-used phrase that goes like this, ‘Give a man a fish and you feed him for a day; teach a man to fish and you feed him for a lifetime’. In these unprecedented times, many in Goa are turning to traditional forms of occupations and are figuring out ways not just to make their ends meet for a day or two, but how to sustain themselves for a long period of time. At a time when cash is hard to come by, youth from Goa have taken to selling fish and to their surprise, are discovering that all is not lost, as they once feared when they had lost their ‘white collar’ jobs or were unable to get a one. TEAM HERALD looks at some of these inspiring stories that serve as a template of what has been happening across the coastal State as youngsters earn their livelihood and help bring food on the plate for their families back home. Some even see a long-term career plan in this line as they feel there are enough opportunities to scale up and convert this into a lucrative business model 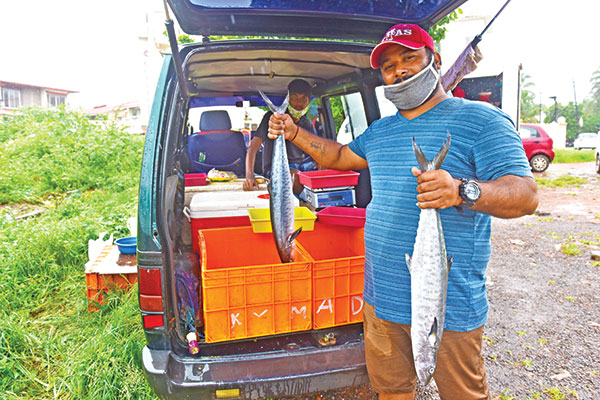 It is a known fact that life in the post-COVID era will not be the same anymore. The effects of the current pandemic, which has shaken the entire world, are expected to have a lasting impact on every sphere of activity, with everyone trying hard to protect their own livelihoods. The world-wide job market has been tumultuous amid the crisis with huge job losses across various sectors and soaring unemployment. Goa has not been an exception to this.

As the pandemic-induced lockdowns battered economies and affected livelihoods across different sectors, Prime Minister Narendra Modi’s ‘Atmanirbhar’ call seems to have taken seriously by our youth. The struggle for survival has made the young generation realize a lot and come to terms with what they can do and what’s in store for them in the near-immediate future. Always known for inclination and pursuit of “white-collor” jobs, the Goan youth, is today seen selling veggies, fruits, fish, to earn theirs and their families’ livelihood in the current crisis.

These types of jobs were earlier taken over by migrants. Presently, the fish business is something that is catching up pretty fast amongst the youth across the State. Today you will find on every nook and corner, locals selling fish in large numbers. With migrants returning back to their States, Goans have taken over the trade, which has no full stop. Fish is part of Goans staple diet and Goans love to eat their favourite ‘nustem’ all 365 days of the year. Incidentally, under ‘Atmanirbhar Bharat’, the State Government has prepared Rs 163.1crore State Action Plan that includes 24 beneficiary oriented schemes for providing boost to fish farming in Goa.

Back from britain and into the fish business

The story about Edward, a 25-year old youth who has returned from London and lives in Old Goa, and his friend, is similar to the story of many in the State.

It was in the first week of February, this year, that Edward had gone to the UK to start his new job at the airport Lounge. However, it was just a month that he had started to work and the airport was shut down in view of the worldwide COVID pandemic. Helpless, he returned back to his motherland in June, with no income in hand.

His close aid Gautam, 30, son of a fisherman, also lost his job. He was working as a store manager in a private firm at Kundaim Industrial estate. Being the eldest brother of three young sisters, Gautam had to look for an alternative to ensure his survival and that of his family’s.  Edward and Gautam are among the several youngsters across Goa, who lost their jobs due to the COVID pandemic. But today, they don’t have any qualms about taking up fishing to help their families during the crisis.

“My baba (father) is a fisherman. We have our own canoe. When I was working, he used to catch fish and Ma (mother) used to sell it. I decided to take up the business of selling. Edward has a Maruti Omni.  We used the vehicle as our fish selling cart,” Gautam explains. “Initially it was difficult. But then, we got in touch with a fisherman in Malvan from whom we get fresh catch every day and sell it here. I must say, the daily revenue is what my monthly salary was. We both together earn around Rs 7,000-Rs 8,500 daily by selling fish,” he added.

Edward explained that after initially trying to sell fish in the Old Goa area itself, we went to Kundaim, Ponda and Panjim and areas around on a weekly basis. I tell you, we have seen many youths getting into this business. You see across the State, you will find youngsters with vehicles selling fish. There is no shame,” he said with a big smile on his face.

If one takes a round across Panjim, Taleigao, Old Goa, Porvorim, one can see many unemployed youths in Goa, whether male or female, have ventured into this newer role of direct selling of fish, which till now was popular with some senior citizens and non-Goans. These youths include graduates and some foreign nationals with Portuguese passports. “It is nice to see that our own boys and girls are into the fishing business. They give you a very homely feeling. Good barging also. This is what Prime Minister Narendra Modi means ‘Atmanirbhar’,” Rohidas Shet, a customer, said. Fish, vegetable and fruit sale is the fastest growing business in the current pandemic and has been caught up well by the local youths. This is a story of many, who are hit hard due to the current pandemic.

The father of an infant, Santosh Rivonkar, a bus driver by profession, is left without any work today.

"My daily expense is around Rs 1,000. From where am I going to get this? I took a loan of Rs 10,000 from my friend and sold my bullet. And I have started this fish sale business," he explained.

Rivonkar further stated that he has started the business since the last two months and he sells the fish at wholesale price. "We move out of the house around 5 am in the morning and later go home in the afternoon. The sale is good and I feel, government should support such business," he added.

‘Better to do this instead of remaining unemployed’

Lockdown and the absence of fresh fish in the State have pushed several people to fish starvation. However, some youth have taken it upon themselves to make sure fish reach the plates of the people. In Salcete, the trucks coming from other States may have been discontinued. But the small-time fishermen continued to venture into the rivers and sea waters, which gave them returns of moderate catches. This fish was being sold by the fishermen themselves or also by some youngsters who saw it as a business opportunity.

Afroz Shaikh, a fruit and vegetable shop owner from Margao now sells fish on a road leading towards Ramnagari, and ahead towards Chandor. The road sees a lot of traffic. Herald had a chat with Afroz and he said, "I earlier sold vegetables at the market. However, after the lockdown, there were no people walking into the market. We have spent days sitting at home as we did not have a business," he explained.

Afroz stated that he is now selling fish as this is good business.

"I make a decent income to support my family," he said. On the day Herald spoke to Afroz, he had mackerels and small fish, which he finished selling by that evening itself.

Another youngster in his 30s, Simon Mascarenhas is selling fish as well as homegrown fruits at Borda. Not that he has no competition but his work for 12 years in a car dealership as a Sales Executive, a white-collar job and the traits of selling that the job gave him is setting him apart in the entire crowd.

While speaking to Simon about his journey and the similar kind of work others are doing, one could get the feeling that that there is a lot of desire amongst the youth to be self-employed and they have resources too. However, they need push and in the case of Simon the question "what after the lockdown?' has pushed him ahead.  Simon told Herald that he had quit his job to do business but life had some other plans. After the lockdown instead of service, he chose to help his mother and sell their products and also procure more variety of horticulture and fish products from his friends from Ponda.

Another youth Saiesh Prabhu who was running a successful Event Management company faced downtime during the lockdown and he too, took to selling fish in bulk. He told Herald that he has also started selling mangoes grown in his home town, Cuncolim.