Vector-borne diseases on the rise in Mormugao

A visit around Mormugao taluka, especially in the port town and nearby areas revealed that vector-borne diseases like dengue were on the rise. DHIRAJ HARMALKAR has the details 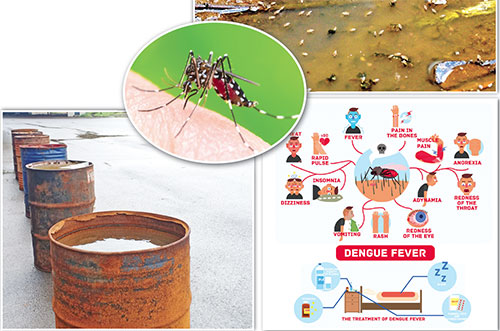 In recent years the dengue outbreak in Mormugao taluka has panicked the people as two deaths were reported in 2018 and 2019 even as health authorities are trying their best to combat the disease and treat the affected patients.

While passing through the Dabolim airport, Shantinagar, New Vaddem, Mangor Hill and Sada areas, it was shocking to see that barrels are kept open outside their houses by many people for the purpose of personal use. In scrapyards across the Mormugao municipal area there are used tyres, scrap materials and other plastic containers which have been left open. Due to heavy rainfall, these barrels gets filled up while water is also accumulated in the old tyres and in scrape materials which act as breeding for mosquitoes.

Situation in Belabai, Maimolem and Mestavadem areas is also similar, wherein the garbage dump spots, empty bottles, tins etc have become a breeding ground for mosquitoes as people tend to dump coconut shells and plastic waste specially which has the capacity to withhold the water and life cycle of mosquitoes breeding is seven days.

Also some of the densely populated pockets in Baina area too pose threat to the residents due to presence of scrapyards and dumping of empty bottles, barrels, tyres etc all over. The presence of migrants workers at the under-construction flyover project work is also posing a threat to the nearby residential area even as the government has made screening of migrants workers mandatory in view of rise in vector-borne diseases.

Little further at Headland Sada many people tend to store water in plastic barrels and other containers. This is being done as residents do not receive water throughout the day which was promised to them by the government. People get water for two to three hours and sometimes if there is pipeline breakdown then they do not have any other alternative source of water. Therefore people have been storing water in barrels and drums since several decades and keep them uncovered outside their homes which acts as breeding ground for mosquitoes to lay their eggs and multiply as per the information given by the health officials. The life cycle for mosquitoes to breed is seven days. There is an absolute need to keep the barrels, drums and containers storing water covered with lids.

Doctors working in the National Vector Borne Diseases Control Programme of Directorate of Health Services have been creating awareness following sudden spurt in the dengue and malaria cases.

The unplanned and uncontrolled urbanisation has caused pressure on the civic amenities especially on water supply which further leads to people storing water but fail to keep them covered. Larva tend to float in clean stagnated water and therefore it is very important to keep the stored water covered with lids or it be used daily. Further the changing pattern of rainfall has also led to the shifting of the transmission dengue outbreak and therefore people tend to see more suspected dengue cases.

It is equally important that people should inspect their surroundings regularly and keep it clean ad dengue mosquito larvae breed in clean water. Disposal of solid waste such as plastic and water holding capacity containers need to be done systematically. Safe water storage practices such as properly covering the water barrels and tanks need to be followed. Responsible behaviour and community participation is of paramount importance in eradication of vector borne disease like dengue.

In 2018, a total of 335 dengue cases were reported across Goa while, it rose to 726 cases in 2019. During both these years, two deaths were reported both in the Mormugao taluka. However, due to various measures taken by the public health authorities the dengue cases dropped to 376 in 2020.

Statistical data of dengue and malaria cases in various primary health centres from Mormugao taluka are as follows:

According to health officer of Cansaulim primary health Dr Samita Gauns, there were only five dengue cases while there were no malaria cases during the last seven months this year. 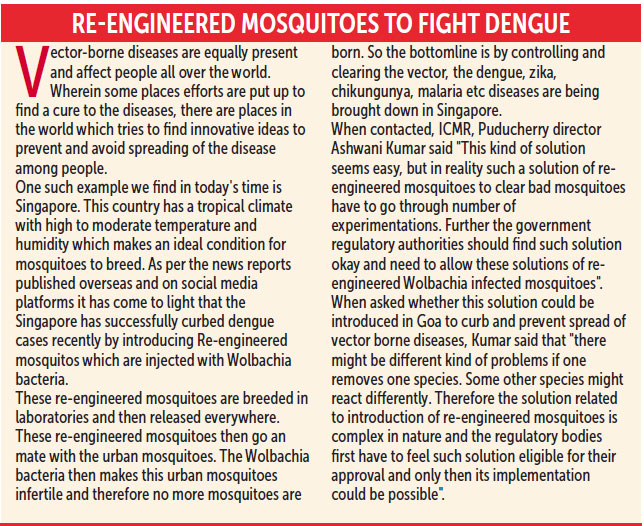