Water, water everywhere but very few drops to drink… ... and land, land everywhere, but no plots to give 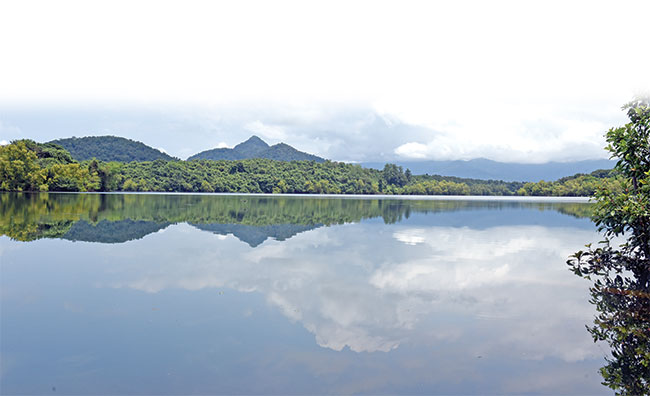 This is a story, which has gone down in the record books of stark ironies in the history of Goa. Kusatta Nilu Gaonkar has seen it all. He even got into electoral politics to see if he could better the lives of those who were displaced from their beloved Curdi village. As he travelled with team Herald through the rehabilitation sites, and to the old Kurdi village, his exasperation has reached its peak, “We had about 2 acres of land divided into lands we owned as tenants (deemed owners) and complete ownership in Kurdi. Since then it has been all downhill.

Gaonkar speaks of how the villages of Vaddem and Valkini where almost all the Selaulim displaced still struggle for water. We are at the edge of the dam. “Our old village is submerged in water. And yet we have to struggle for regular drinking water. How on earth can you call this progress and development when those who give up so much are left high and dry,” he says.

Manoj Nayaran Paryekar, former Sarpanch and now panch of Bhati says, “So you had those who got compensation and the “missing families” who were later accommodated under the 20 point programme. But no one has water to drink. With regard to the missing families, we have had so many meetings and sub-committees formed, where we have outlined the need to give them compensation at par with the rest.”

For over twenty years, this hasn’t happened.

He recounts the first such meeting in 2006 at the Pajimol guest house chaired by then Chief Minister Pratapsingh Rane. Incidentally, they had the same Water Resources Minister Filippe Neri Rodrigues. “In that meeting, Executive Engineer WRD Ashok Rane said that there was no land. I, as Sarpanch of Bhati village, retorted and said that there was enough land which we were willing to identify and mark,” he added.

WRD Minister Rodrigues then constituted a sub-committee to identify land for the missing families. The sub-committee was Chaired by the Samguem MLA  and had the Deputy Collector, Superintending Engineer WRD, Member Secretary WRD, Exec Eng PWD and two elected representatives of local bodies, Manoj Paryekar and Gokuldas Gaonkar.

This committee identified 31 demarcated plots in Valkini colony 1 and 51 demarcated, but not allotted plots in Vaddem. Besides, land which was supposed to come under submergence due to the increase in the dam height, but did not submerge and was released by the beneficiaries, would also be available.

‘We were confident that we could actually earmark 80 hectares of land. And the sub-committee in its report clearly identified those lands.

In 2013, the then Chief Minister (late) Manohar Parrikar met officials of departments and local representatives and “assured” (in the minutes of the said meeting) that "these cases will be reviewed and settled suitably".

And now in 2020, Revenue Minister Jennifer Monserrate during her visit has given a fresh set of assurances and asked for a resurvey of the lands so that allotments can be made to the missing families.

Let us not forget that this has been a 20-year exercise.

What do people of Kurdi feel? Well, this response sums it up.

In Bhati village, Somnath Baba Naik, the brother of Ramnath Baba Naik, whose name was missing from even the missing persons list, told Herald, “We have only seen committees, but no land. But there is land. All of it is encroached. Now we will another committee and another survey. But the Selaulim dam evacuees story lies between those who are sitting on encroached land on which there are massive plantations and people like us, who have got nothing” 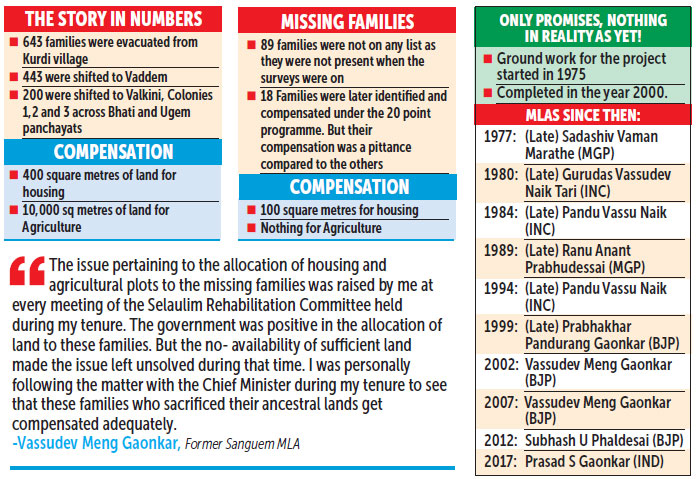